After putting the kids to bed Friday night, I finished up the last of my packing and prepared for an early morning. My flight was leaving at 6:20 AM so I had my alarm set for 4:15 AM (i.e. the middle of the night as far as I'm concerned). Saturday morning was smooth and I was easily able to get through Airport Security and to the gate to wait on my flight. I was still very nervous about flying, but because God had made it very clear to me that this was in fact what He wanted me to do, I had an overwhelming peace that calmed my nerves.

As I boarded the flight, they told me I couldn't carry on my small rolling suitcase and made me check it at the gate. I wasn't surprised. Hubs told me to expect that since I was flying on a smaller plane. The flight into Atlanta was delayed slightly, and with only a scheduled 55 minute layover, which turned into more like a 30 minute layover, I was waiting impatiently at the gate to retrieve my suitcase, and my butt was bookin' it to the next gate (on the other side of creation) to make my connecting flight to LAX. I hurried like a crazy person, didn't have time to stop for a potty break or to pick up some trashy celebrity magazines, and arrived at the gate just in time for the final boarding call.

Not as relaxing as I had hoped, but at least I made it on the flight! And I was a bit surprised when they made me check my suitcase at the gate again, but I wasn't too worried since I'd get it back when I deplaned. It was lovely being sandwiched between two people for this 5 hour flight. At least the plane had TV screens in each headrest, so I previewed a few movies and was going to make the $6 commitment to help pass the time. Unfortunately, they needed to "reboot" the lousy Linux system and once they did, my TV never came back up. Awesome. But it wasn't a big deal. They at least had WiFi available on the plane, so I was able to chat with hubs on MSN throughout the flight on my iPhone. It was nice having him "with me" during that long flight.

I arrived in LAX essentially on time and headed off the plane. I wondered why I didn't see any checked baggage appearing at the gate. I asked a Delta guy and he told me the checked bags would be at baggage claim.

Let me remind you guys... I don't fly. I handed my suitcase over at the gate and expected to pick it up at the gate, just as on my flight to Atlanta. But NO. I had to go to baggage claim with the rest of the 300+ people on the flight and wait indefinitely for them to send my checked bag down the carousel. Seriously. Why did I bother elimination 1,200 things from my packing list so it could all fit in my small carry-on so I could avoid lost luggage and waiting on baggage when apparently the airline was gonna force me to go through all of that anyway? As you can imagine, I was quite irritated. Compound that with the fact that I was talking with heart mama Jenny, who was picking me up at the airport, as I headed to baggage claim, only to have my call dropped and suddenly have NO SERVICE. I tried going outside, pacing around the baggage claim area, going back up the escalator to "higher ground" -- all to no avail. So here I was, no bag, no cell phone, no way of telling my ride I had to wait on my bag instead of meet her out front as expected.

After what seemed like FOREVER, my freshly dented/tweaked bag finally made its way to the carousel and I was finally able to officially begin my California trip. I headed outside, was miraculously able to get in touch with Jenny, and jumped in the car with her. Keep in mind, this is someone I've never once met in real life. I know her from her blog and from Facebook and from our Sisters by Heart group, but for all intents and purposes, she was a random stranger in a rental car and I just jumped right in with her! Of course I knew her well enough to know I was fine, and honestly, it was amazing how well we clicked as we drove from the airport to heart mama Amy's house. And meeting Amy? Just as easy and carefree and natural as catching up with a friend you haven't seen in years! These ladies are BEYOND awesome. Seriously.

Sorry to cut this one short, but my boy is up and ready for breakfast!

Here's a sneak peak. Of Venice Beach. Not the cole slaw... 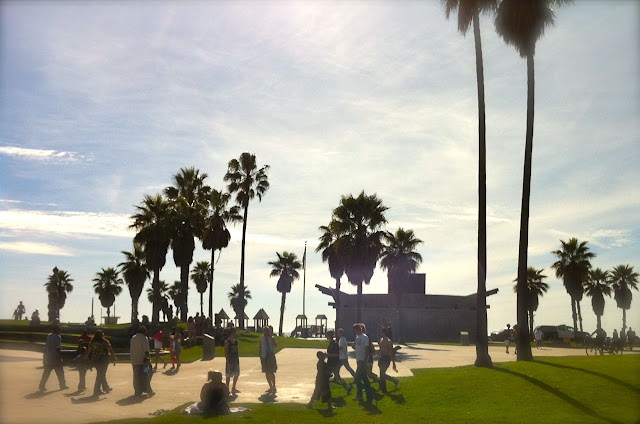