When LO attended a local private Christian school for K3 and K4, I served as the "Room Mom" both years and absolutely loved it! I'm passionate about communication and made sure my parents were aware of all of the activities happening in the classroom as well as the various volunteer opportunities available for them to serve. These parents were always on the ball, happy to sign up to help in the classroom, send in items for class parties, etc. My job was Room Mom was fun, relatively easy and a great way to learn which parent goes with each child. ;)

Fast-forward to LO's first year in public school for Kindergarten. I'm serving as the "Room Mom" for her class again this year. We have 21 students, which would mean we have 21 parents/guardians to participate in the classroom.

We have a need for a simple computer lab volunteer. They help turn computers on. And maybe help the kids "point & click" on the right thing during the class. It's a 30-minute obligation.

I've had ZERO parents sign up (besides myself and my co-Room Mom). ZERO.

Seriously? For Kindergarten?? This is the kids' first year of "big school" and I can't get a single parent to sign up to help in the computer lab?? I understand not all parents have the stay-at-home flexibility that I have, but come on. It's like using ONE LUNCH HOUR EVERY OTHER MONTH to volunteer and help out in your own kid's classroom. Is that seriously too much to ask?

This is so frustrating. I have another classroom program (reading to the kids!) that needs volunteers; again, only myself and my co-Room Mom have signed up to help. The sucky thing is you can't bring younger siblings to these volunteer programs in the classroom, so I have to make arrangements for Chase each time I go to help with the computer lab or the reading program. It's a bit of an inconvenience but I don't mind doing it occasionally. Only since there are NO parents interested in helping in their child's classroom, I'm gonna need to do it a LOT more frequently than occasionally.

This is NOT what I signed up for! I just cannot fathom how parents are so disinterested in helping in their child's Kindergarten class. I get that parents work, parents are busy, etc. But the most frustrating part is NONE of them even bother to respond to my emails! Not even just to tell me they work and aren't able to help. That'd be nice to know and so appreciated! But it's frustrating to keep contacting my parents and get ZERO responses from them.

I guess if this is what it's gonna be like, I'll be sure NOT to sign up for this in the future. I just hate that parents' lack of involvement cause parents like me (who love to serve!) to give up and walk away from the opportunity to make a difference in their child's class because they can't get parents to reply to a simple email, to just communicate with me!

Ugh. Thanks for letting me vent. Hopefully this will improve as the school year continues, but I'm not gonna hold my breath.

Seriously, though. What am I missing? What am I not understanding? I'm all for working parents to dodge the bullet of volunteering if they truly can't get away for one lunch hour every other month. And I get that some stay-at-home parents may have younger siblings they can't make alternate arrangements for so they'd be able to serve. But is it really too much to ask for parents to RESPOND to me to let me know this?? I feel like I'm taking crazy pills!!!

I am SO. STINKIN'. PROUD. of my sweet LO! She has grown up so much over the past few months, and I can hardly believe she's now a full-time elementary school student who can ride her bike without training wheels and actually listen to mommy & daddy sometimes!

I'm not sure if I had written about it on the blog much lately, but LO has had some significant behavior issues over the summer. She wasn't listening, wouldn't do what she was asked to do, had a very negative attitude (especially when being disciplined) and was just overall not the sweet little girl I once knew.

One date I was lamenting to friend about LO's behavior problems, and that dear sweet friend of mine suggested I try a system she was using with her 5-year-old son. Marbles.

She uses a system of marbles to reward good behavior. Essentially, if the child does something (anything!) good/nice/thoughtful/kind/etc., they earn a marble! If they do anything opposite of those behaviors, they lose a marble. Once they reach their goal of marbles, they get a special reward/prize. My friend uses 25 as her goal... we started with 10. ;)

I wanted to introduce LO to the system and allow her a smaller goal so that she could (hopefully) reap a reward quickly and see the benefit of earning marbles and behaving. Those first 10 marbles were quite a process! It was gain one, lose one, gain another, lose another. Honestly I was being VERY generous and giving her marbles for the simplest thing just so I'd have some to take away later, because I KNEW I would be taking some away based on her behavior pattern. It was crazy and I thought it'd never happen.

She finally earned 10 marbles and was able to reap the reward she had set for herself: a family trip to Chuck E. Cheese's! We went to dinner at Outback (that was for mommy & daddy) and then went to CEC (for LO), and it was a wonderful night! We talked up how awesome it was that she had behaved well enough to earn 10 marbles, trying to encourage her to keep it up. The kids had a blast and I'm ashamed to admit I only captured a few pictures of the kids together on a roller-coaster simulator ride. 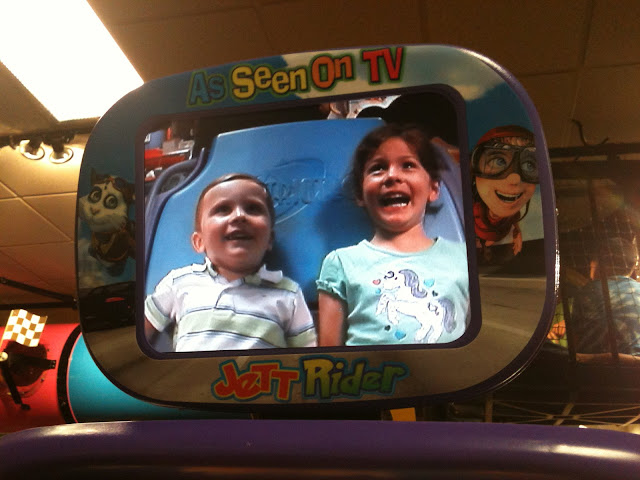 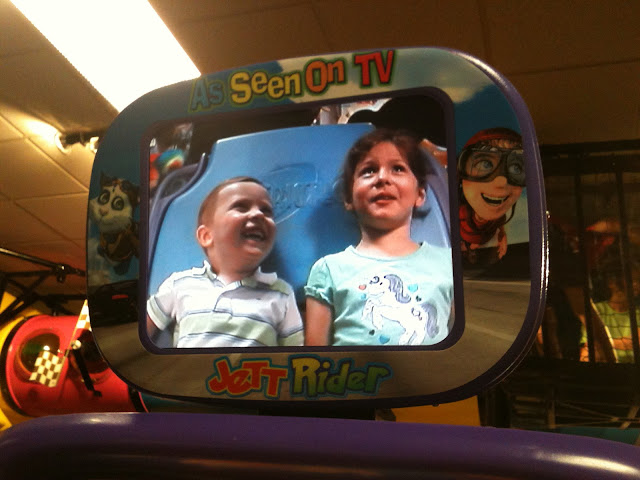 After the success with 10 marbles, I upped the ante and made her next goal 12 marbles. Of course we let her choose that reward again, which was a trip to Brewster's for ice cream (quick and cheap -- mommy like!). I noticed almost immediately that she was able to earn at least one marble per day rather consistently, which was a HUGE improvement from slowly gaining/losing/gaining her first 10 marbles. She started being super easy to wake up in the morning (at 6:40 AM - gasp!) for school, did her morning routine without complaining, had "green" (i.e. good) days at school, started being nicer to her brother (this one was HUGE!!!!!) and would do her evening routine without too much grumbling. Let's just say she earned her 12 marbles in about a week! Shocker!! I was so impressed and proud of her!

So tonight we loaded up in the car after dinner to hit Brewster's for a big fat ice cream reward! Again, we made sure to talk about how great she's been doing, what a big helper she has been, how proud we are of her, etc. She really enjoyed her special dinosaur sundae, complete with sprinkles and eyeballs... ;) 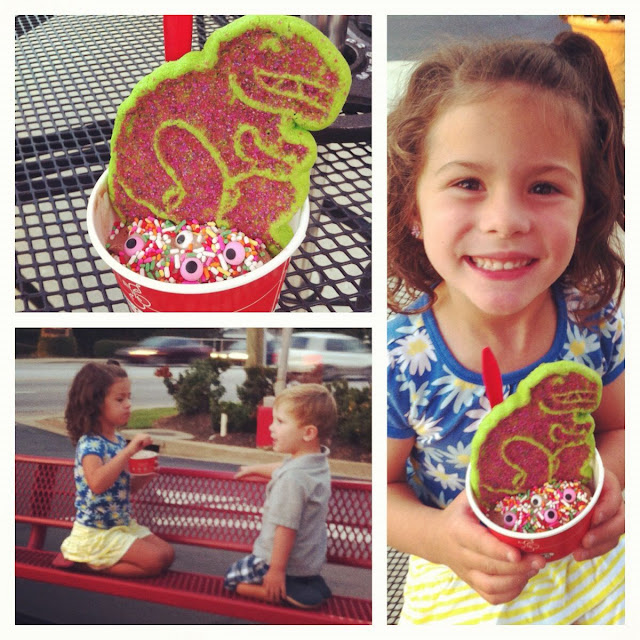 I love the pic of her and Chase on the bench talking. Chase had already downed his ice cream cone by then but they had a pretty good conversation about who-knows-what. I love these kids!!

After our ice cream trip, I let LO know that her next goal was 15 marbles (I'm trying to ease her up to 25 so this doesn't end up being so expensive with all of these rewards!) and asked her what she wanted as her next special prize. After some discussion, she landed on a trip to a local amusement park complete with go carts and arcade games.

I'm so happy that this little girl of mine is back to being her sweet, thoughtful, lovable self! I'm so glad the marbles reward system is working so well for her and us! I highly recommend giving this a try if you're desperate for a way to improve your child's behavior and listening skills! It worked for us! :))
Posted by mom2lo at 10:49 PM No comments:

Hello out there! Yes, it's been quite some time since my last post, and I do apologize for that. Things have been quite hectic around here since LO started Kindergarten last month! The great news is she's really loving her new school and she's adjusted incredibly well to her new routine. Mommy, on the other hand? Notsomuch. I haven't seen 6:30 AM on my alarm clock consistently for probably over 10 years! So this has been a big adjustment for me, too! But I must admit I'm really LOVING the special Mommy/Chase time every day while LO's at school. Things have been a bit busy lately since I've taken on several new roles with LO's school, but I'm hoping that'll start to even out a bit as the school year progresses. I've taken on the school newsletter, which is published four times per year. It's called a newsletter, but at an average of 13 pages per, it's a bit of a novel in my mind. ;) Additionally, I am serving as a Room Parent for LO's Kindergarten classroom. This is a LOT to take on at the beginning of the year, but I'm very excited about it! I loved doing the newsletter because it gave me an automatic "IN" with so many of the school's staff, from the librarian to the principal to the counselor and more! I know me, and if I didn't have an "in" with anyone, I wouldn't have had the courage to introduce myself and get to know the people that will be helping care for and teach my sweet girl. I'm also managing the school's Facebook page and am serving on a committee that is putting together our annual fall festival in October. Whew! It's been a busy 3 weeks! Add work, family and other commitments to that, and it's a wonder I'm able to function these days! ;)

Those of you who follow me on Twitter may have already seen this video when I tweeted it yesterday, but since I like to chronicle cool happenings with the kids on the blog, I wanted to make sure to post it here as well. Here's the backstory: About 2 weeks ago, we purchased a Balance Buddy to put on LO's bike to help her learn to ride without training wheels. Since she wasn't a big fan of learning to ride without the training wheels, we were hoping this little device would help give her the confidence she needed to get the hang of it. It's basically a little extension on the back of the bike that allows an adult to hold on and run along behind her to help her keep her balance.

I busted it out for the first time about 2 weeks ago for all of about 5 minutes before both of us were too frustrated to continue. Hubs tried it with her maybe once or twice since then for a few minutes each time, but the balance thing didn't seem to be coming too easily for her.

Fast-forward to yesterday... I had been sick in bed all weekend, but I managed to stumble out of bed and head outside to see my family for a few minutes, and was SHOCK N' AWED by what I saw! Hubs had spent about another 20 minutes with LO using the Balance Buddy, and the girl was OFF! She was all over the parking lot across the street from our house, making amazing turns, speeding her way back and forth like you wouldn't believe!!! I know I couldn't believe it! It's like it just "clicked" for her and all of a sudden, she was on her way! I seriously was amazed at how fast she was riding and how much control she had over that bike. Whoa. This girl never ceases to amaze me!!!!!