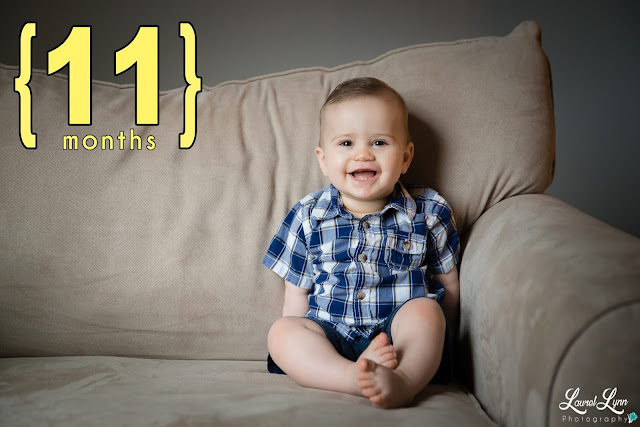 Can you believe this sweet squishy nugget will be ONE YEAR OLD next month? I for one refuse to believe it. We've had such a wonderful 11 months! He truly is the most chill and relaxed babe... unless he's hungry. Or tired. Or told no. Basically, if he's happy, we're all happy!

He is officially 100% mobile and I'm not sure how I feel about it. With LO, we were all about assisting her to get moving when she was a wee one. In fact, she was walking at 10 months old. What?! Why?! I don't even know. With this last go 'round, we've enjoyed the peace that comes from knowing the little guy was right where we left him. Of course that would only last so long.

He's crawling like a boss and has started pulling up in his crib, the pack n' play, and the living room ottoman. He still LOVES holding fingers to stand up and walk, and his balance has improved a bunch in just the past week or two. He also loves to clap his hands and he thinks it's hilarious when I sign "all done" to him. He still takes a paci -- the same kind he's had since birth -- and I'm totally okay with it. I did lower his crib now that he's pulling up, and also removed the breathable mesh bumper that was in there. That means that his paci inevitably rolls between the slats and onto the floor occasionally, but it doesn't seem to bother him. We also keep a spare in there so he has a backup when needed.

He still only has his two bottom teeth, but his top right one has been threatening to come in for weeks! You can clearly see it under his gums but it hasn't officially popped through yet. It looks so uncomfortable, but he's a champ!

He loves to eat! We still keep a stash of baby foods that he enjoys, but for the most part he eats whatever we're eating. Especially bread. The boy LOVES his carbs! I haven't weighed him lately but I'm pretty sure he's around the 22 pound mark. And so unbelievably squishy!!!

#sorrynotsorry in advance for the plethora of pics I'm about to share here! This guy was just so much fun when I took his 11 month pics... I had to post them! 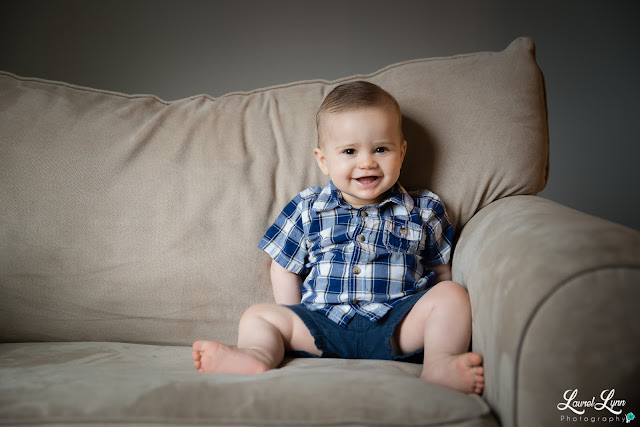 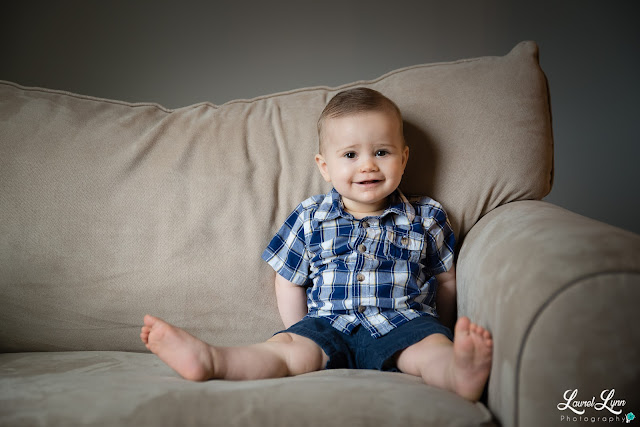 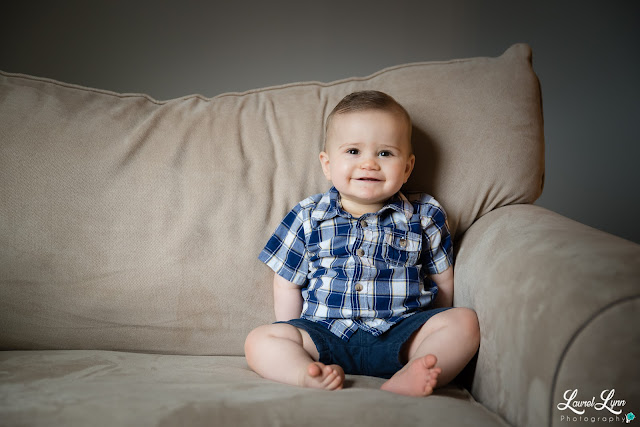 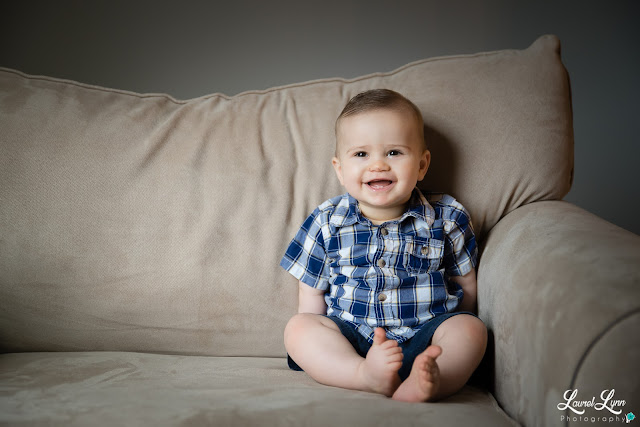 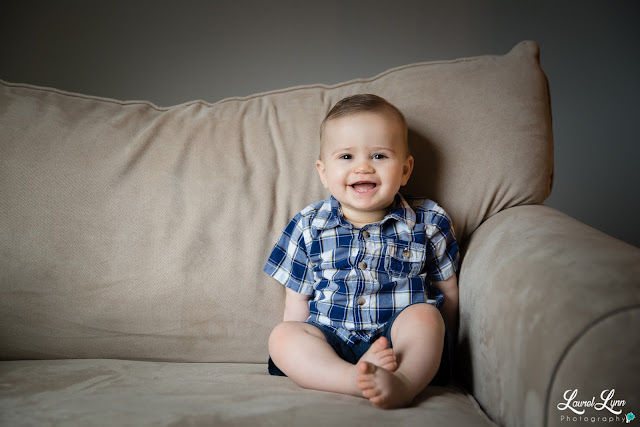 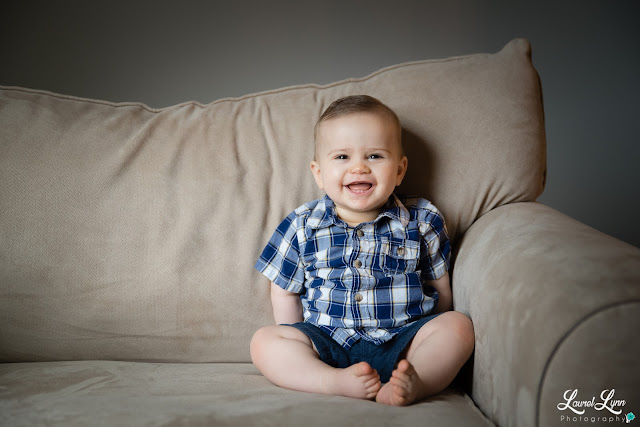 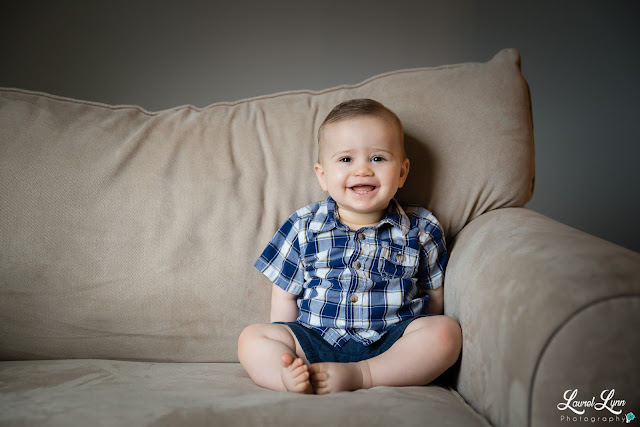 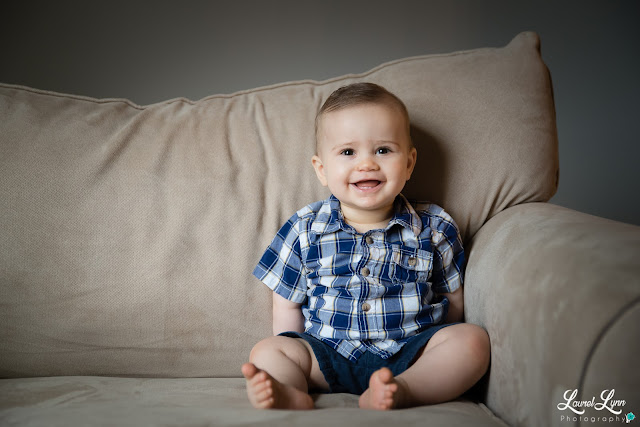 He's starting to lose interest in this photoshoot thing... 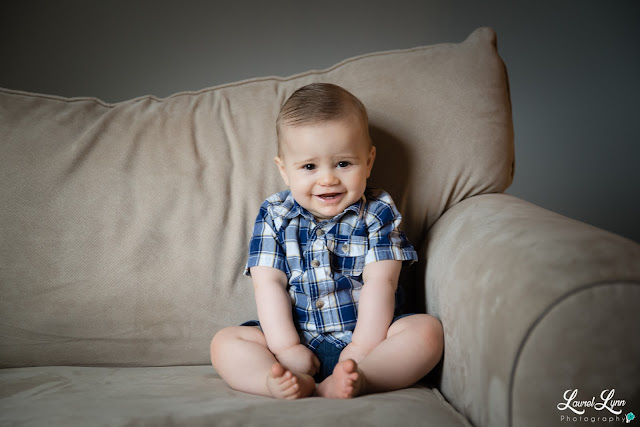 But mommy tried cheering him on a bit, which made him want to clap, too! 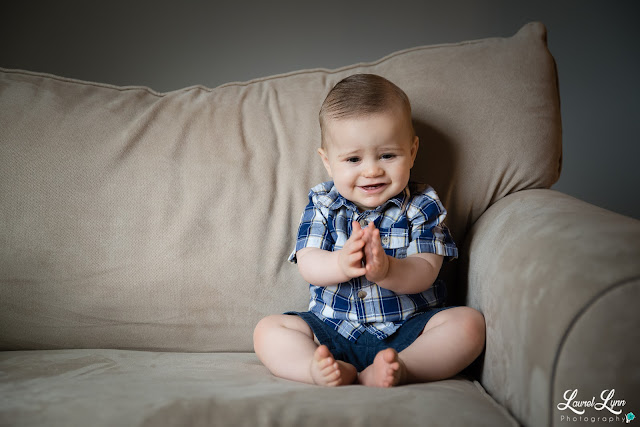 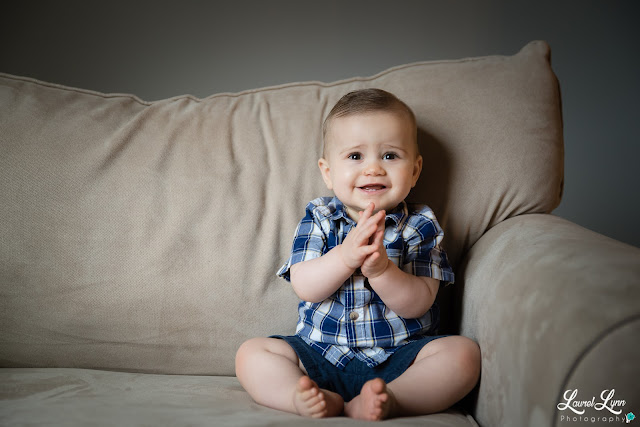 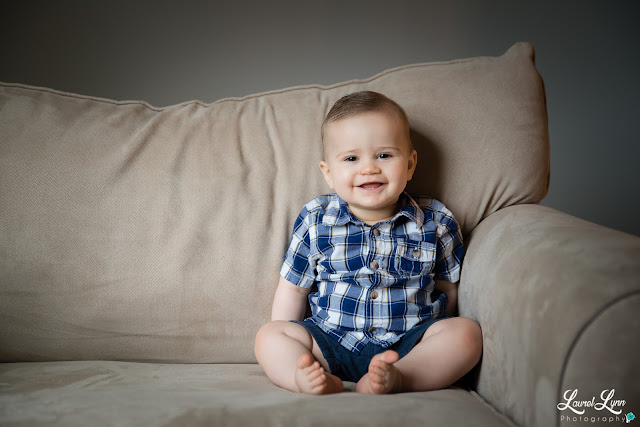 Those lashes. Can you even? #notfair 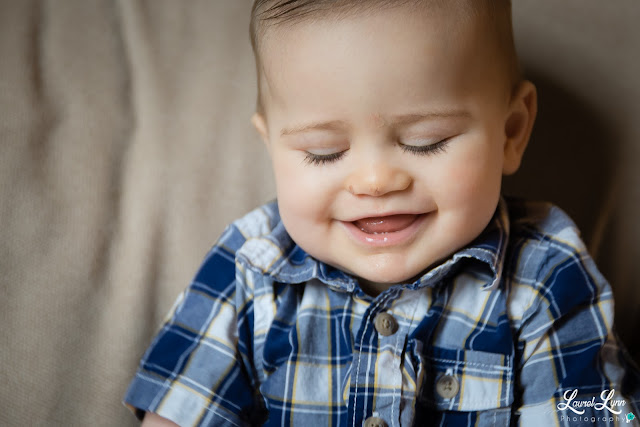 Oh. Please disregard the scabs from carpet burn on his nose. Bless! 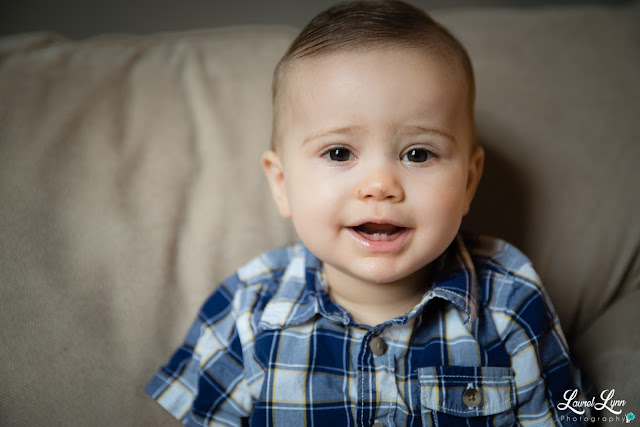 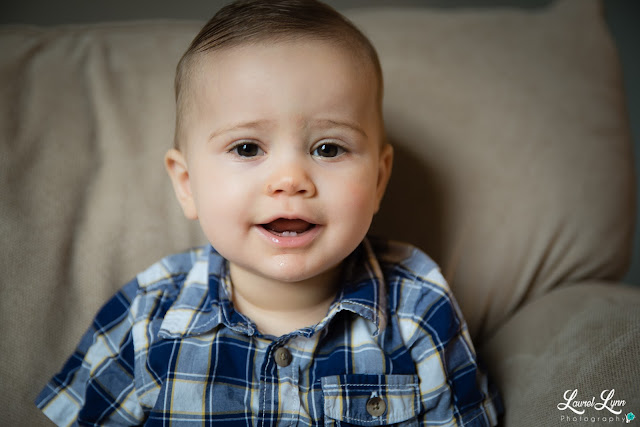 I think he's considering a quick getaway through the window here... 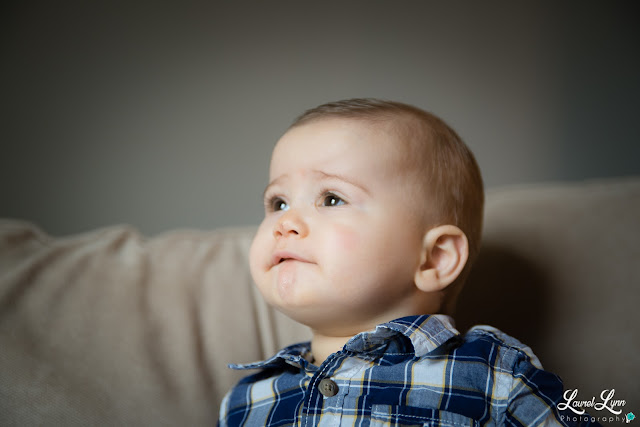 Again with those lashes! 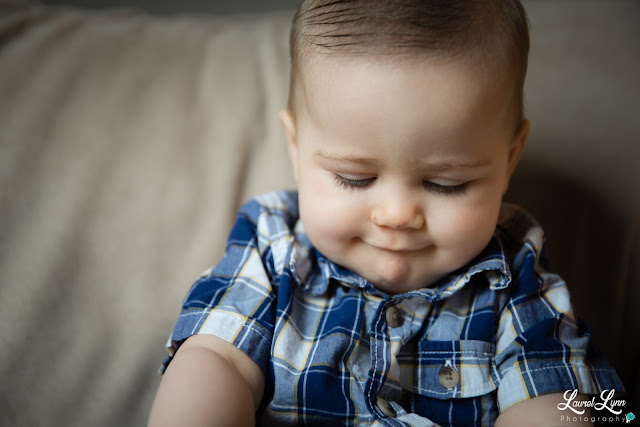 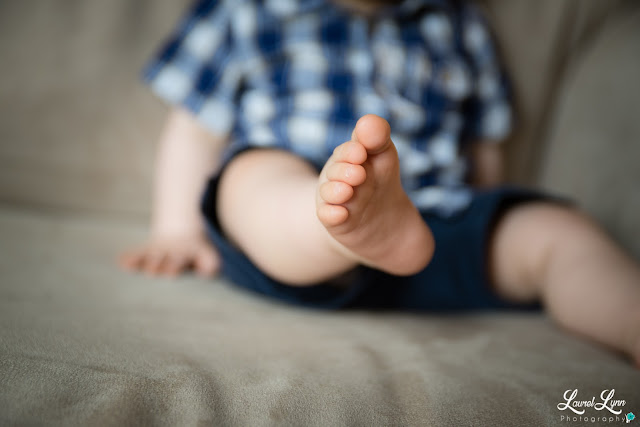 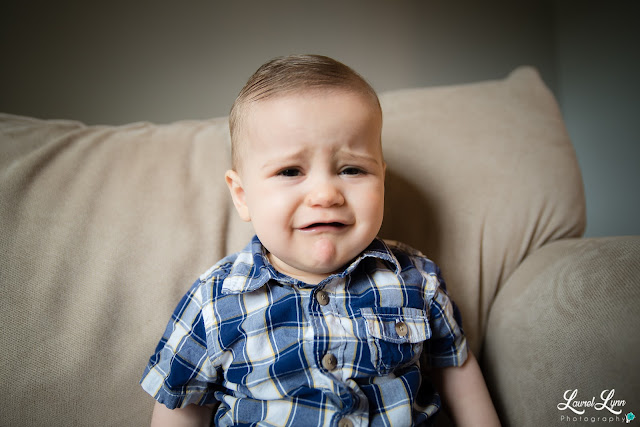 This is seriously a look where I clearly see pleading and begging in his eyes. Poor babe! 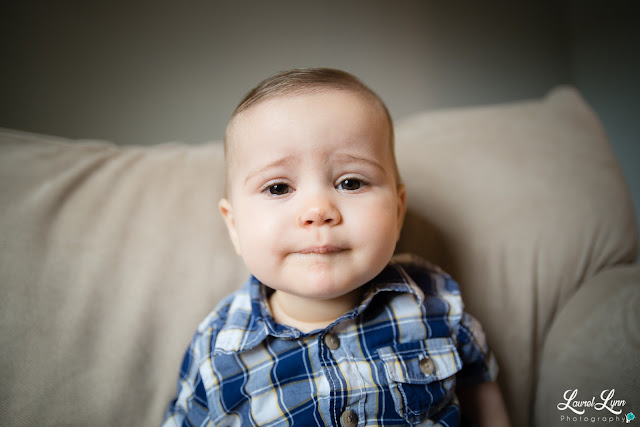 Life is good again! He's on the floor and finally has the freedom to MOVE! Bye, mommy! ;) 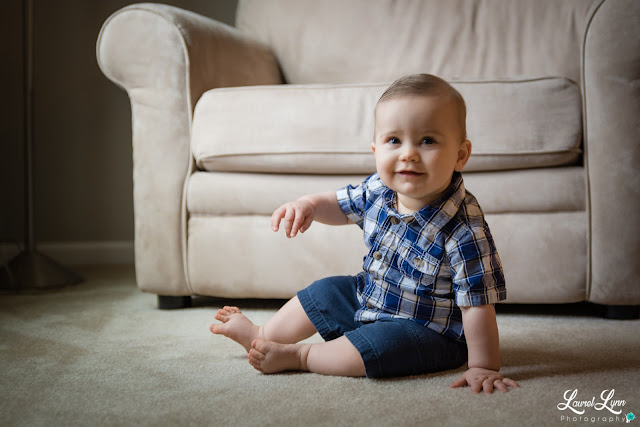 Love this sweet piece of goodness SO SO SO SO much!!!
Posted by mom2lo at 11:35 PM No comments: