Last week we took a much-needed family vacay to Pawleys Island, just south of Myrtle Beach. It was an awesome trip that also included my sisters, nieces/nephews and mama! Good times!!

I've shared a little photo recap of our trip below for those of you who are still reading this ol' blog of mine! ;)

First up on any road trip? Movies for the kids (including headphones to keep things quiet for mommy & daddy) and m&m blizzards from Dairy Queen for all! 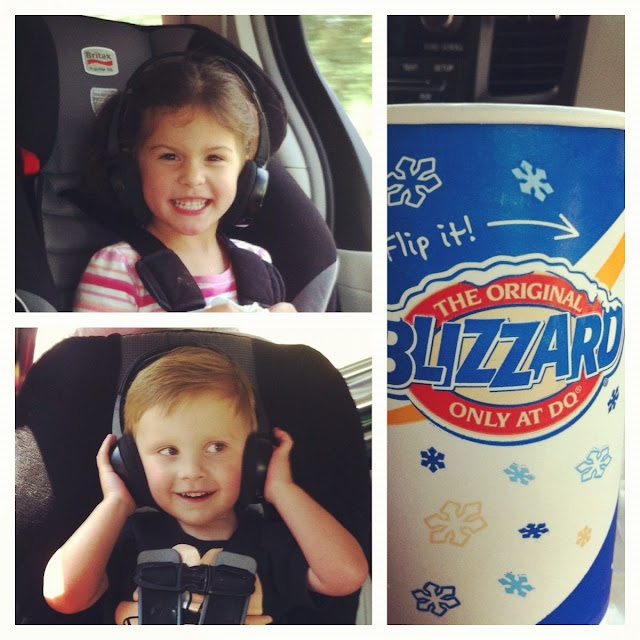 Our first night in Pawleys Island we hit up a local pizza joint/pub for some delicious eats. We had a simple cheese pizza and a pepperoni stromboli. YUM-O. 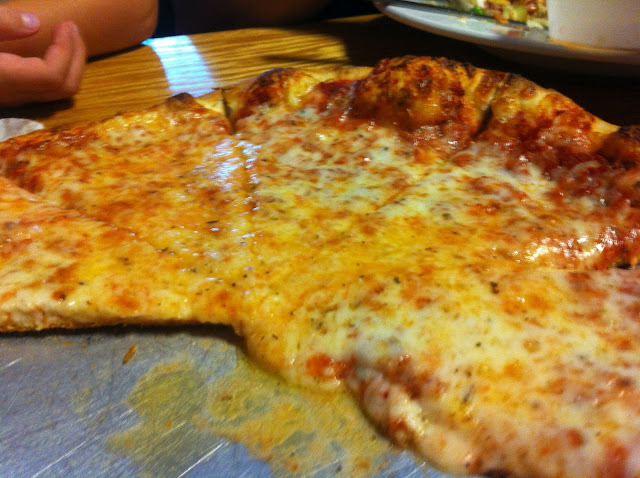 After dinner it was time to head next door to the Piggly Wiggly (yes, we're in the South, folks), for some groceries we'll need during our stay. I can tell you with complete honesty that I've NEVER EVER EVER allowed the kids to ride in one of those car carts pictured below, but since we were on vacation, I knew I could let them get away with it (without them expecting to do so every time we go to the store in the future). They had a blast with daddy speeding them up one aisle and down the next, and even thought it was hilarious (as did I) when daddy knocked over a display with the cart as he zoomed past it. LOL! 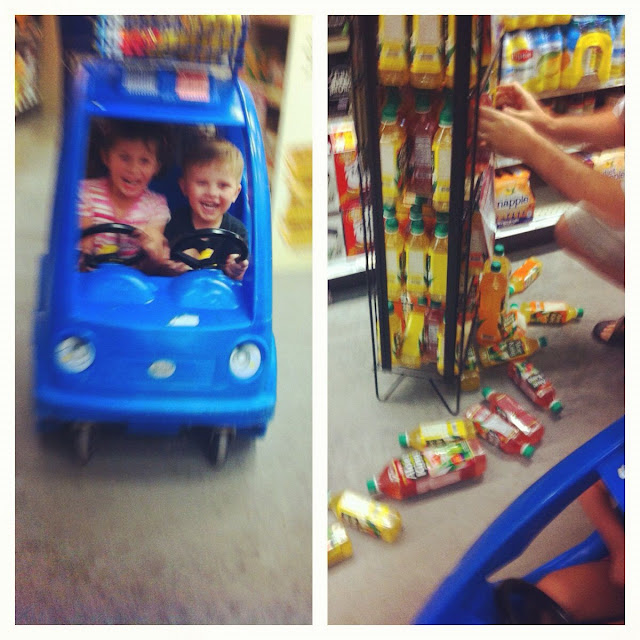 Our first day on vacation also happened to be one of my sisters' birthdays, so we celebrated with cake! As you can see, she was turning 6, and since I'm 3 years younger than her, I guess that makes me 3! ;) 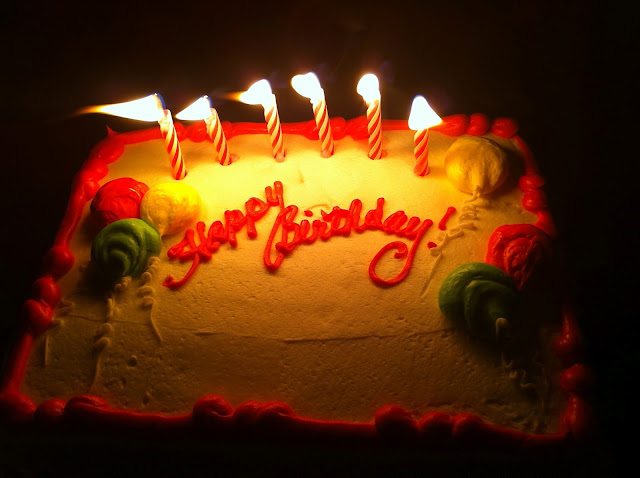 Thursday was our first day on the beach. Ah, glorious sunny skies! The kids were beyond stoked and I couldn't wait for some relaxing sunbathing. 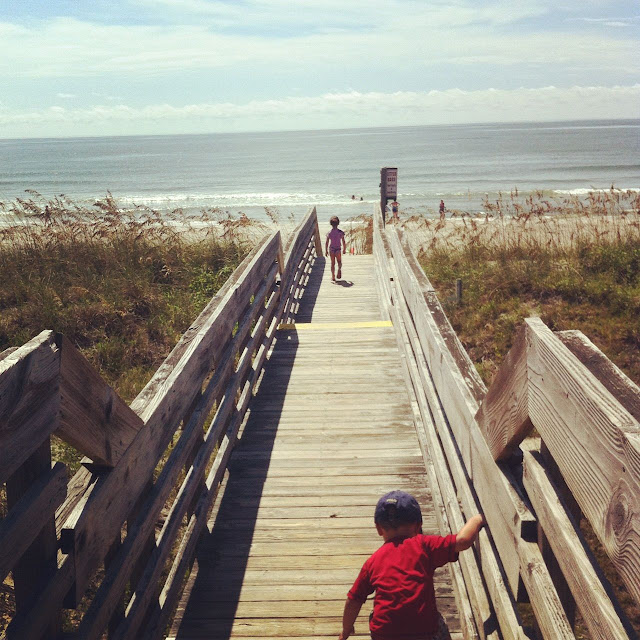 The kids were super excited about the water, and I was so impressed with both of them! LO was not a big fan of the waves on our previous beach trips, but she jumped in with no fear this time around! Chase had a great time, too, and wasn't worried at all about those waves, either! 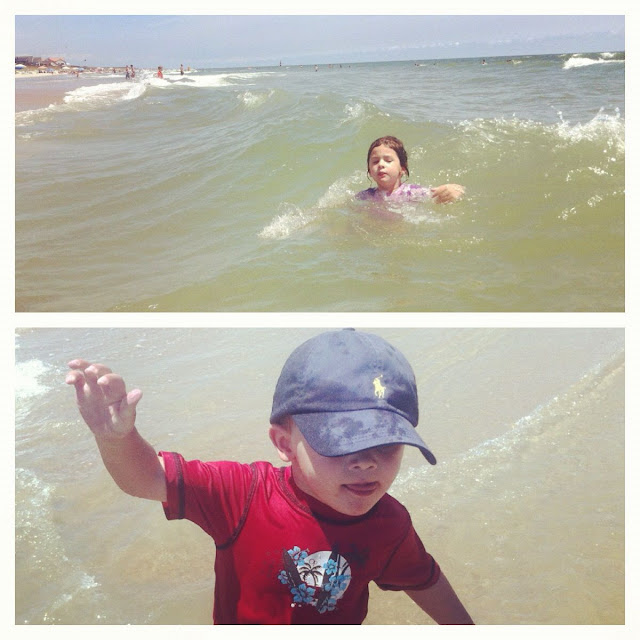 Later that night we went out for dinner at a total tourist trap. It was supposed to be Margaritaville, but the wait was -- seriously -- 3 1/2 to 4 hours. Are you kidding me!? Anywho, we ended up at Planet Hollywood instead. 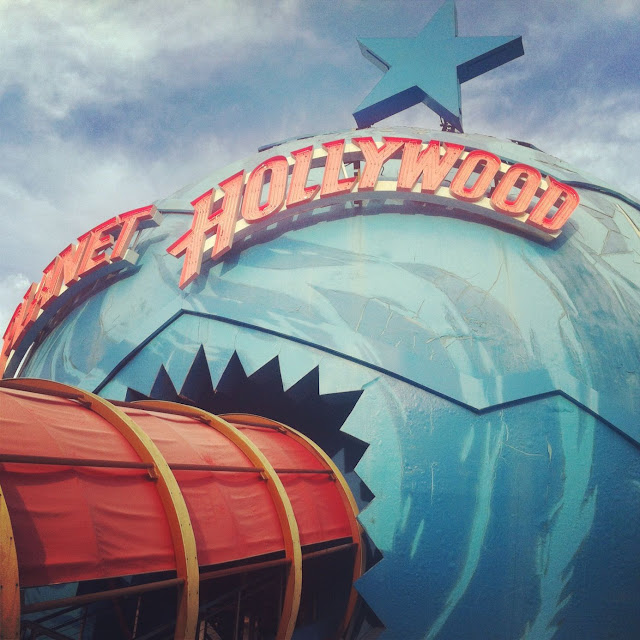 I opted for the rack (yes, an entire rack!) of ribs, with a side of sautéed veggies to balance it out. ;) Ha! The fun part was that my 21-year-old nephew got them, too, so it was a bit of a challenge to see if I could finish them since there was no question that boy could put down some food! As expected, he tore 'em up quicker than I ever could've dreamed! 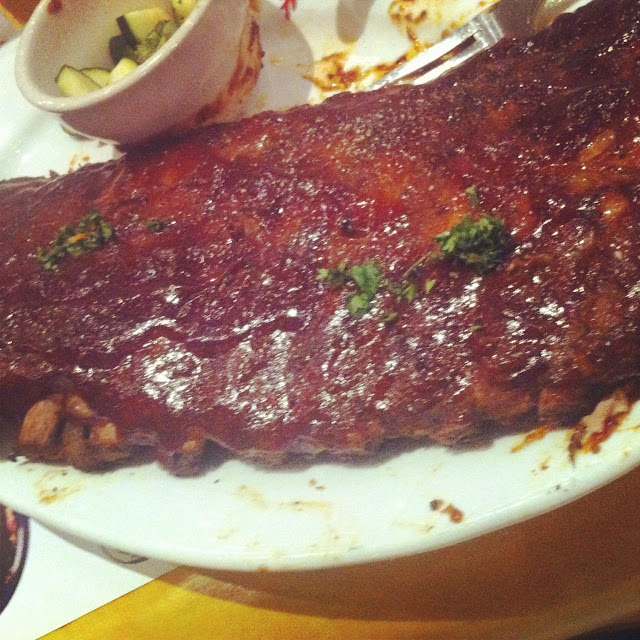 After dinner, we drove over to Broadway at the Beach for some nighttime fun! I loved the Wonder Works building because it's upside-down. We never went inside and I still have no idea what it is... but it was pretty cool regardless. 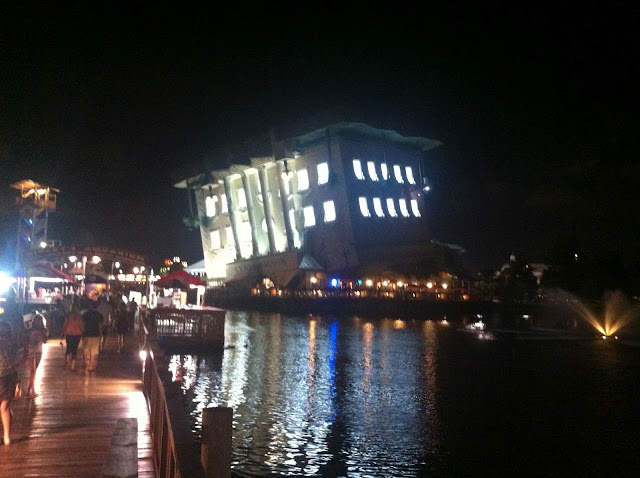 The kids did fun stuff like ride the carousel... 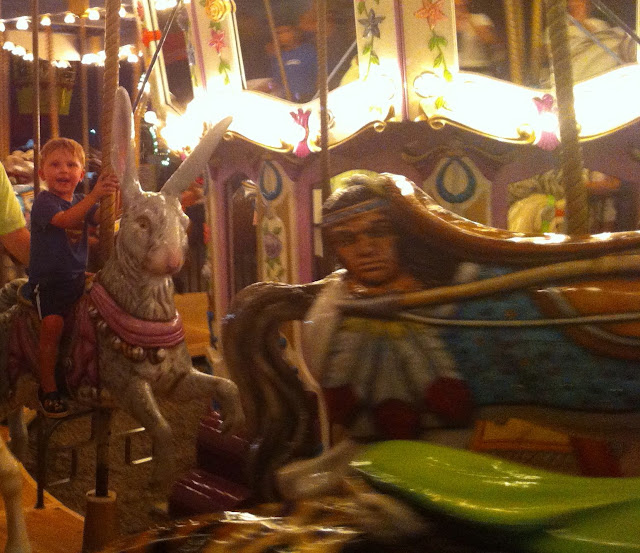 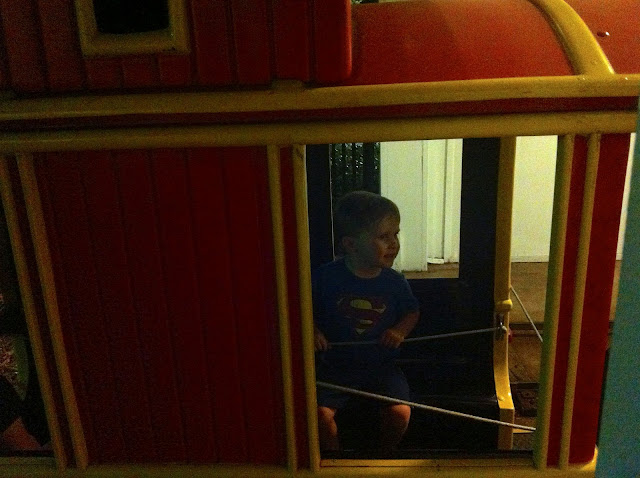 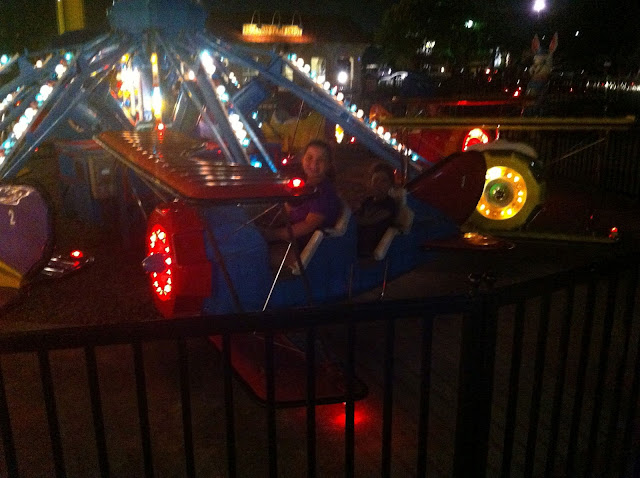 I also made them pose for a photo with a really creepy bunny statue, because I'm just that kind of mom. See how stoked LO was?? 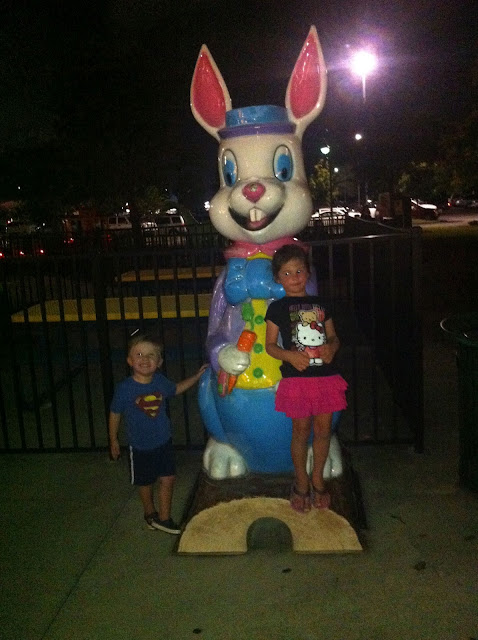 Friday we all slept in and didn't really get moving toward the beach until the early afternoon. Hubs, the kids and I were the last ones to get ready after everyone else had already walked down to the beach. We were sunscreen'd up and ready to go when hubs suggested we wait a few minutes after checking the weather. We're VERY glad we did.

Here's a pic my sister sent me from the beach. It was too late for them to make a run for it once this "pop up hurricane" rolled in... 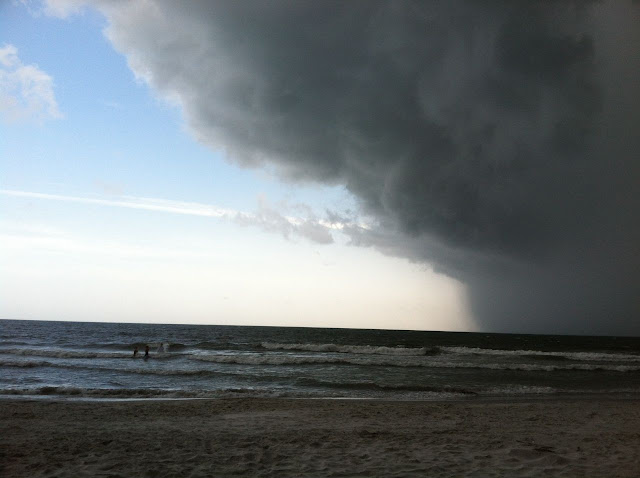 Hubs drove to get them since it was about 1/4 mile from the house to the beach, and they were straight up SOAKED, being pelted with raindrops as they tried to hurry back to the house. The poor things! The weather didn't really cooperate so we didn't end up at the beach on Friday.

We did go out to eat and ended up at a joint called Quigley's Pint & Plate. There was a bit of a wait for a party our size, but I think it was worth it! I hooked myself up with the fried pickles appetizer and my VERY FIRST experience of Chicken & Waffles! They were sweet potato waffles and were served with a sausage gravy, and OHMYGOODNESS people. These will NOT be my last order of Chicken & Waffles! Amazing!! 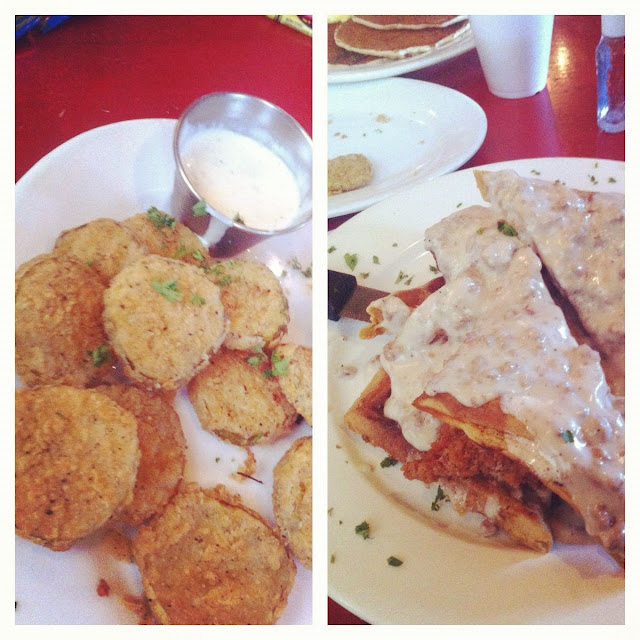 The plan on Saturday was to start early and get to the beach before any storms had a chance to ruin our fun. But lo and behold, these were my kids at 9:30 AM!! Still zonked! (Hubs was out cold, too!) 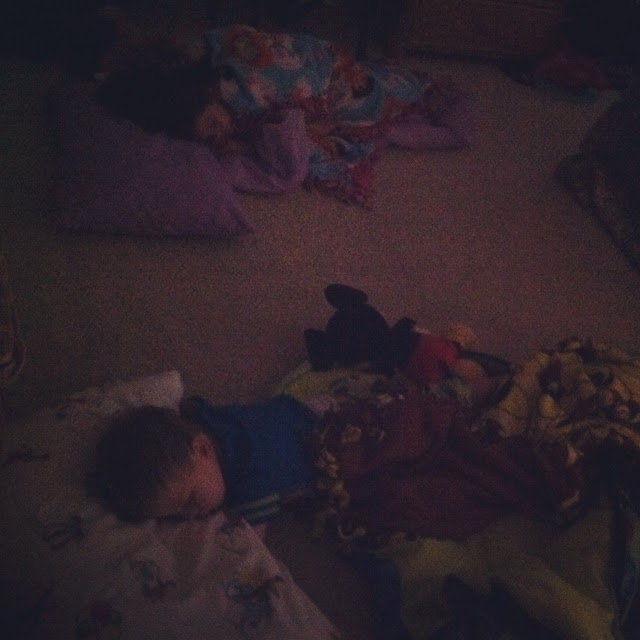 After we all finally got moving, it was beach time! Here's my handsome fella catching a lift on the walk to the beach. 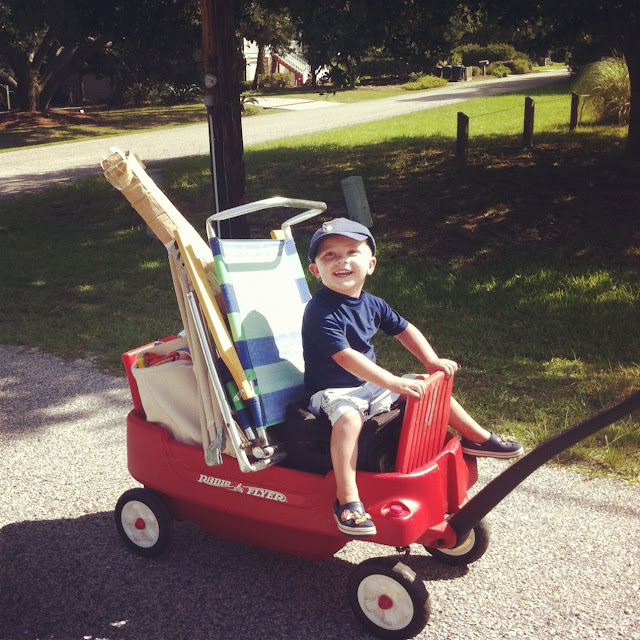 We were able to get lots of time in the sun and sand! 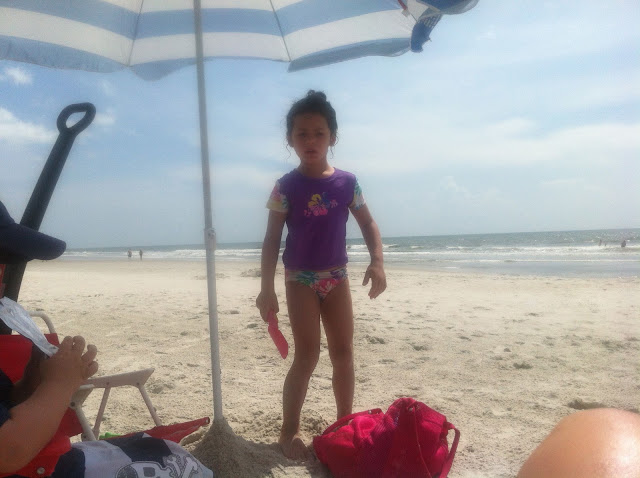 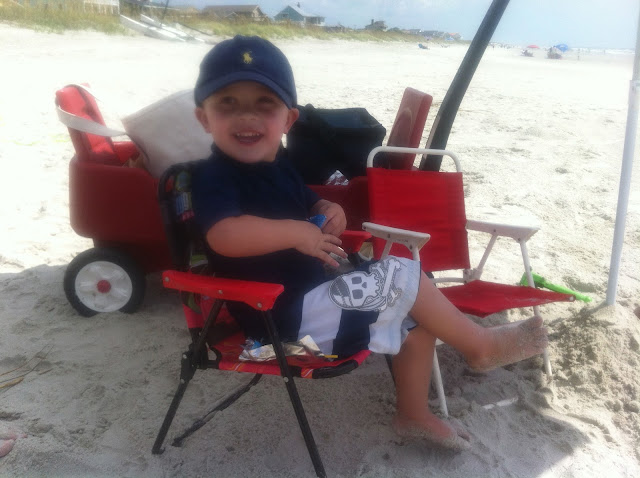 As did his big sister... 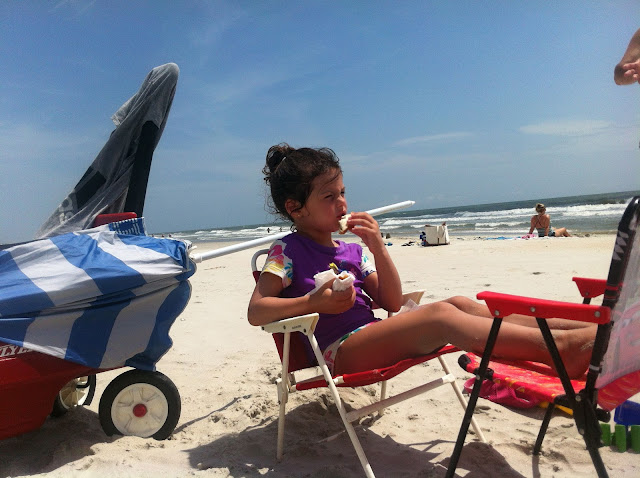 But like a sudden pop-up storm rolling in, so was this mess that Chase turned into... 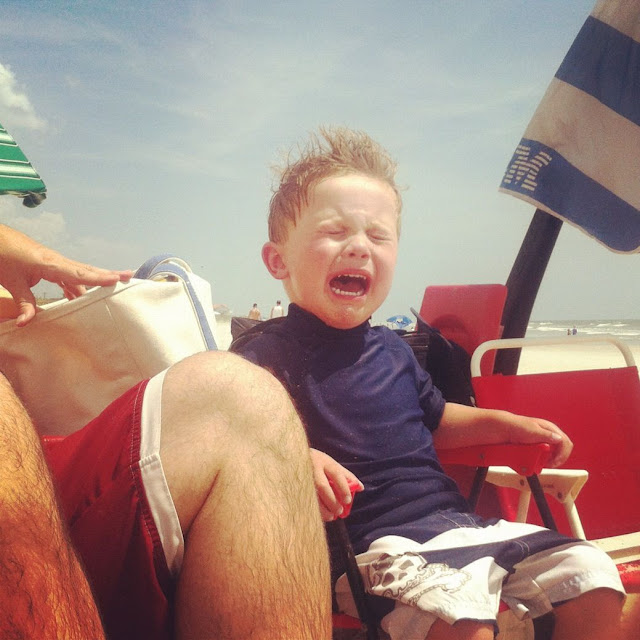 As you can imagine, it was about time for us to pack up and go! But not before I was able to take a pic of my sister's LifeProof case for her Droid! 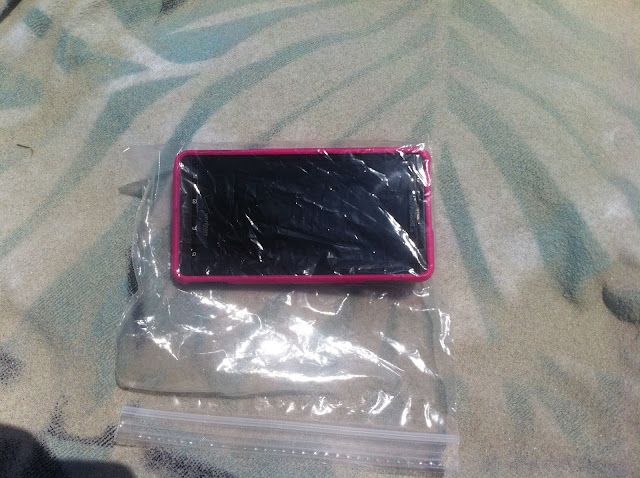 Haha!!! She's been debating between an iPhone or the Samsung Galaxy III (gag) but I think my LifeProof case might have put her over the edge... especially when I could take pics of one of her kids like the one below. 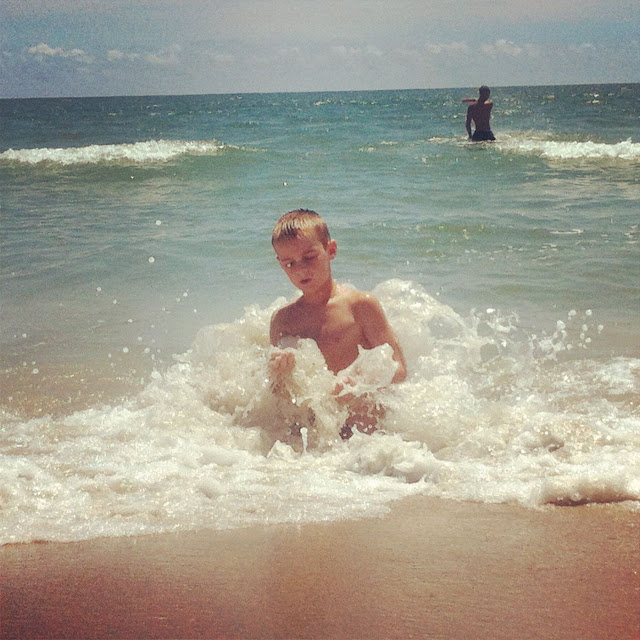 After the beach it was time to clean up and pack up. We had a great trip and the kids had an amazing time playing with their cousins and enjoying the beach. It was only a matter of time before this was happening on the way home... 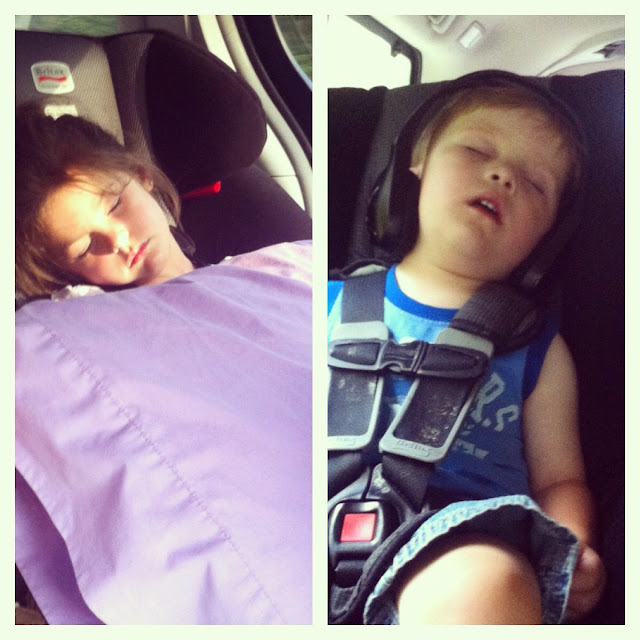 We had a super great time and it was just what we needed as we start to say good-bye to summer and hello to LO's first day of Kindergarten, which is just around the corner!
Posted by mom2lo at 9:59 PM