The One with the Fractured Clavicle??

It’s been an interesting week around here, y’all! We’ve had an ER visit for one kid, a head cold for over 2 weeks that just.won’t.quit. for me, and a canceled family vacation for all of us.

Wednesday afternoon, while I was at work, sweet little Squish walked behind Chase when he was on the swing in the backyard and was thrown into the ground. With quite a bit of force, as one might expect. He cried a bunch, hubs took care of him, and we were keeping an eye on him. He refused to use his right side well into the evening on Wednesday, wouldn’t let us pick him up under his arms, and was extra clingy and whiny, again, as you’d expect after such an injury. He didn't have a fever, but you could tell he wasn't himself. 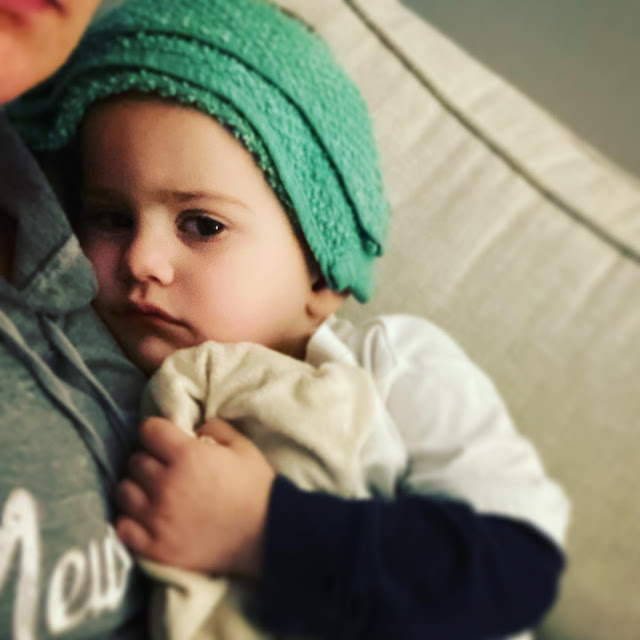 Thursday was more of the same thing. He seemed to improve a bit with a rotation of Tylenol and Advil, but he would just let his right arm hang at his side, doing everything with his non-dominant left hand.

On Friday, when he was still refusing to use his right arm, I took a closer look. I carefully tried moving his hand, then bending his wrist, then his elbow... all was fine. But when I tried to move his arm in a way that required the use of his shoulder, he wanted nothing to do with it, and was in obvious pain.

I looked at his shoulders and was surprised at what I saw: 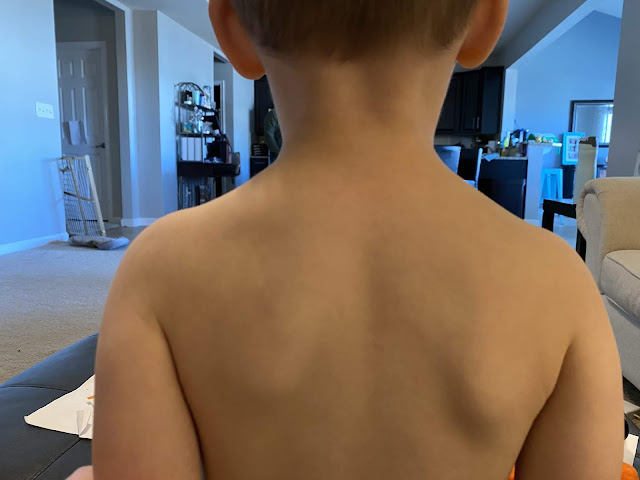 His right shoulder was clearly lower than his left shoulder. Also, his right shoulder blade looked quite a bit lower than the left side. I was immediately concerned he had dislocated his shoulder considering the impact of hitting the ground with such force. #majormomfail

Hubs was working from home Friday, so my mom come over to keep the older 3 while we took Squish to the ER. We considered the nearby urgent care center, but our expectation was that if he had in fact dislocated his shoulder, it would result in a trip to the ER anyway in order to have a pediatric orthopedic doctor sedate him to put the shoulder back in place.

Thankfully, overall, the trip was uneventful. Squish was such a trooper as we waited to be seen at the ER. 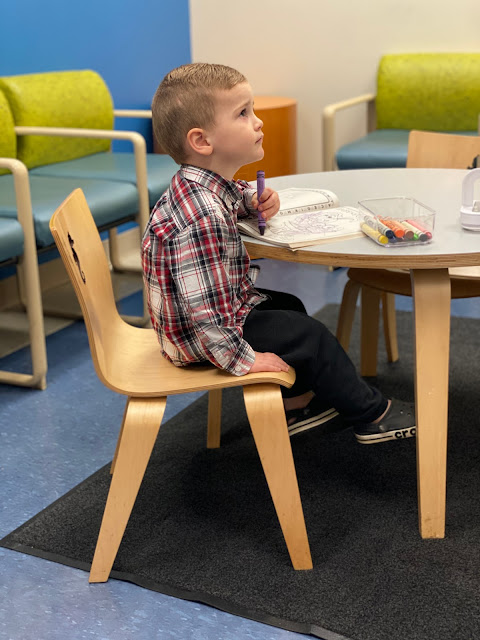 It wasn’t long at all before we were called back. He was such a trooper and was charming both of the lovely nurses.

They got us settled into a room to wait on the ER doctor to see him.

Again, Squish was such a trooper! He had to put on a tiny little hospital gown, and was just so patient throughout the whole process. He really had a hard time doing things with just one hand, so daddy had to help him drink his water. LOL! 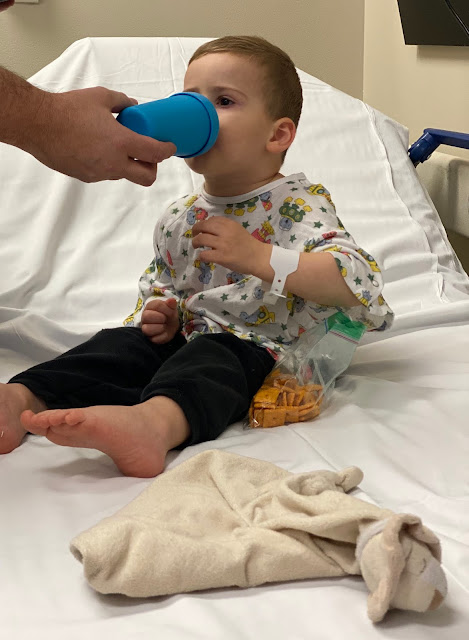 An intern came in to examine him, and it was the most movement I've seen from Squish's right arm without him complaining at all! There was even a tiny "pop" as he manipulated his arm and shoulder for a few minutes. I was surprised Squish didn't wince in pain, but I don't doubt it was just because someone other than mommy + daddy were doing it. He may or may not work us over a tiny little bit since he is (currently) our youngest and most spoiled babe. ;)

Thankfully, he eventually figured out how to make that sippy cup work with just the one functioning arm! LOL! 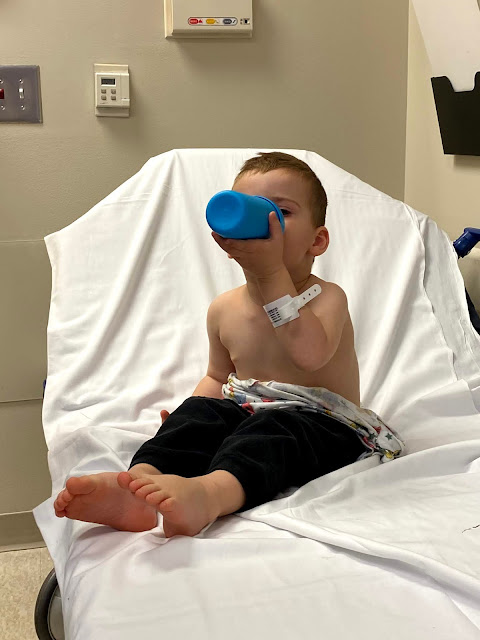 Eventually, the resident came by to see him and evaluate him. He said he'd like to order a few x-rays to see what's going on. He didn't think anything was broken or dislocated, but wanted to rule it out regardless.

A few minutes later, a nice nurse from pediatric radiology came by to take us for his x-rays. He started out pretty cooperative, which was nice. Unfortunately, I wasn't allowed to stay in the room with him due to my being 21 weeks pregnant, so I had to step out and leave daddy in charge. 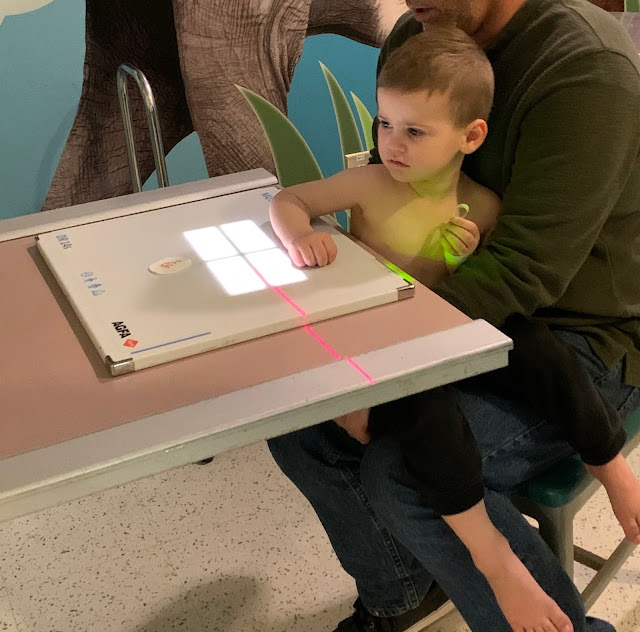 I will say it was absolutely HEARTBREAKING to stand on the other side of that door and hear my sweet baby crying as they had to move him and force him into (likely painful) positions in order to get the images they needed to diagnose him. I was grateful daddy was with him, but there's nothing like a mama's sweet hugs and caresses when undergoing uncomfortable procedures. I was about in tears before they finally opened the door seemingly ages later for me to come in and rescue my sweet Squish.

We went back to his room and waited for the doctors to read the scans and give us the diagnosis. This actually happened a LOT quicker than I had expected! They came in to tell us Squish had a fracture in his clavicle (collar bone). 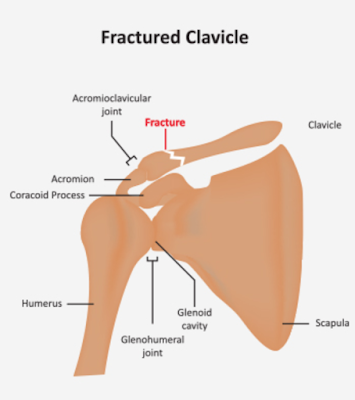 Apparently, this was one of the better bones to break because they told us they fully expect it to heal on its own with NO intervention. So no sling, cast, surgery... nada!

It really was such a relief to know he wouldn't have to be put under anesthesia or have any complex procedures performed on him. It was further heartbreaking to realize he'd been suffering with a broken bone for 2 days, but the fact that they didn't do anything about it made me feel a little better. The same things we'd been doing -- letting him self-manage the use of his arm/shoulder, keeping up a Tylenol/Advil regimen, making sure he takes it easy in order to eliminate the possibility of injuring it further -- that was basically all they told us to do! What a relief!!

Now, the worst part of all of this (if you ask the older 3), is that we had to cancel the vacation we had scheduled to Great Wolf Lodge! 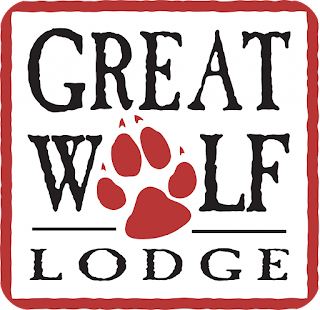 Hubs and I had been planning it for a while, and we told the kids about it two weeks ago, so they've been counting down the days until we were to leave, which was supposed to be bright and early TOMORROW morning! They weren't too excited about the delay, but I promised we would reschedule as soon as we possibly could (and we did!).
Posted by mom2lo at 6:49 PM