Thursday we had the joy of taking a family road trip to Charleston for Chase to have a follow-up appointment with his ENT doctor concerning his ear tubes we had put in last year. The trip was uneventful and the appointment itself was probably one of the quickest of its kind! While our appointment time wasn't until 1:45 PM, we made excellent time traveling to Charleston and, even after hitting Panera in N. Charleston for lunch, we arrived at MUSC Children's Hospital by 1:00 PM. We decided to head in early in hopes that we'd be seen early and get done early, and it worked out very well, even with his big sister in tow this time around.

We did the initial screening with the nurse and were pleased with the results. Chase is up to 32 lbs. and 39" tall! His o2 sats were around 88, which is really great! Luckily they didn't need his BPs so we were able to get through the screening without much crying. 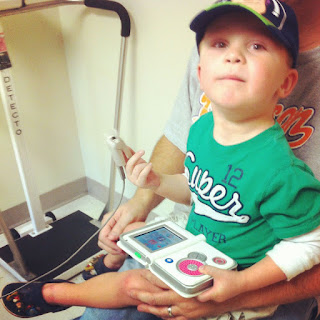 Dr. H had her resident check him out before she came in to see him, and the resident was not able to get a good look at the right tube, but was able to verify the left tube was still in place. Dr. H came in shortly after with the same findings. She said there was a bit of wax in the right ear that blocked her view of the ear canal, so she used one of her fancy "skewers" (that's my word for them, not hers btw) to remove an embarrassing amount of ear wax from the boy's right ear. Once that was out, she could clearly see that the right tube had already fallen out. So we're half way there! We'll go back in 6 months for our next follow-up to check and see if the left tube is still in place or not. Good times!

Next month, Chase has his 6-month follow-up with his local cardiologist on 11/13. For some reason, both hubs and I have the "parental intuition/feeling" that he'll give us the ol' "see ya in another 6 months" scenario since, other than his weight and age, there are no other factors that indicate Chase is ready for his final scheduled heart surgery, the Fontan. Typically we should start to see a decrease in his oxygen saturation, a significant decrease in his energy level, and an increased blueish tint to his lips and nail beds. Like basically to the point where he just doesn't have the energy to even climb up the stairs at bedtime. We're definitely not there yet. Although it's impossible to plan/control/schedule anything relating to our son's heart and his upcoming surgery, hubs and I are both assuming it will be scheduled for late Summer 2013. NOT something we're looking forward to, obviously, but something we've always known would be in our future and definitely something we're looking forward to being on the other side of with our strong and amazing little fighter of a son.
Posted by mom2lo at 5:23 PM