Not surprisingly, Chase was NOT in the mood for the simple things like height and weight. I'm sure it's possible he has bad memories of such things at the cardiologist's office as he usually does really well with height and weight at his pediatrician's office. Weird. Once we were in the exam room, and he saw the blood pressure machine roll over, he was NOT having it! He was ordered to have BPs on all four extremities, but the nurse took pity on us after both legs and an arm. He was screaming and fighting through most of it -- he's never been a fan of having his blood pressure taken (can't blame him!) and today proved no different. His pressures were all good and we were very pleased with his o2 saturation in the upper 80s!

After a bit of a wait, we were taken back for the echo. He wasn't happy about having his shirt taken off or laying down for the echo, and he definitely was not interested in the stickers they typically apply to his chest to capture his heartbeat during the echo, so the tech was nice and left them off. Once he was comfortable and noticed Despicable Me was playing on the TV in the exam room, he was his usual echo champ that we've always known and loved! He was perfectly still and cooperated perfectly! The tech was able to get the images she needed and we were taken back to the exam room to wait on Dr. H.

When he stepped into the room, he was amazed at how big our boy is now! It's been 6 months since his last appointment, and I guess he's had a bit of a growth spurt since then. He definitely looks huge to me! But Dr. H was pleased with the information collected this morning and of course, essentially the first thing he said after greeting us, was that it was time to talk Fontan timing.

It's never easy, even in these early planning stages, to even THINK of turning your 3-year-old son over for a third heart surgery. I won't even get into the many thoughts that run through my mind because they're mostly depressing and I don't want to dwell on them. But just imagine our surprise when Dr. H suggested we go ahead and get his Fontan scheduled for March.

We of course mentioned our biggest concern about that timeframe (with the knowledge that we will most certainly be bumped for more urgent surgical cases once or twice... potentially taking us into April or May), was that Chase's little brother or sister is due the first week of May. Dr. H congratulated us and agreed that we definitely needed to consider the timing of his surgery very carefully. Dr. H agreed we didn't want to schedule the Fontan during the winter (cold/flu/RSV) months, which we wholeheartedly agreed with, and that being 7 months pregnant (with the ginormous size and lack of energy that comes along with it) isn't ideal, either. Going for a summer Fontan (June/July) would be tough considering the lack of sleep and other big changes that comes along with having a 3rd child, so then we talked about early Fall 2013. I'd love to have it done before LO starts 1st grade because I'd hate for her to miss too much school (it goes without saying that she would be with us in Charleston for the  entire duration of our stay for Chase's surgery). I'm pretty sure if she misses 10 days she doesn't get credit for the year (or something weird like that?). So maybe early August would be best?

We all agreed that we would bring Chase back in 4 months (March) for another echo. Really the ONLY thing that could potentially force our hand to have to schedule his Fontan is a section of narrowing in his LPA (left pulmonary artery). It was ballooned during his pre-Fontan cath last year, which gave it a bit more wiggle room, but according to today's echo, it appears to have gone back to what it was before that cath. So if we see in March that the size of his LPA narrowing has worsened, we'll have no choice but to get him on the books for his Fontan at MUSC. If all looks good, we can most likely schedule it later in the Fall.

It was encouraging to hear Dr. H say that there is some research that indicates delaying the Fontan as long as possible (within reason) is actually beneficial to HLHSers like Chase because as adults, HLHS patients are appearing to have significant issues with their liver due to the higher pressure that the Fontan brings. So hanging out with Glenn circulation (which is what Chase has now) is potentially ideal anyway. He mentioned there's a surgeon in Atlanta who is waiting as far out as 7 or 8 years old for his single ventricle patients before their Fontan because he used to be an adult cardiologist and saw the significant liver issues his patients were having as adults, and feels that delaying the Fontan as much as possible can help reduce potential liver issues as they grow into adulthood.

So that's that. We'll go back in March and Chase's LPA will tell us whether we need to go ahead and schedule his Fontan or if we can wait it out a bit longer. Whether I'm still pregnant or have a newborn to contend with, I am NOT looking forward to the thought of going in for the Fontan. However, I am looking forward to being post-Fontan and not having any additional planned/scheduled surgeries in our future. As difficult as it is to block out the negative thoughts that come up all to often during this journey, I know my hope is in the Lord and that He has a perfect plan for our boy. I am trusting in Him, even and especially through this heart-wrenching journey.

I didn't take any pics of the kiddo at the appointment, but here he is after we got him loaded up in the car to head home. He's got pretty much all of his favorite things: Mickey, monkey, juice and food. The only things missing are his iPod and a Concrete Mixer from Culver's. ;) 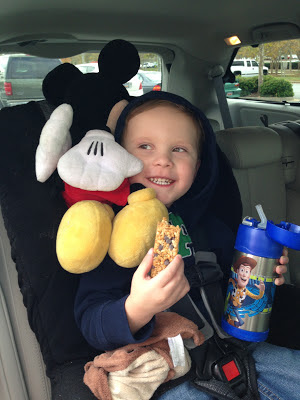 Thanks a bunch to those of you who were praying for us today! God answers the prayers of his people!
Posted by mom2lo at 12:03 PM