FINALLY! I know that's what you're thinking, right? Haha! I'm finally forcing myself to update the blog with the Disney details before I forget about all of them! I figured it'd be easier to break it up by day so I don't overwhelm the poo out of all of you with a single massive post.

So Day 1 was Saturday, November 24th. We left hubs' aunt's house near Tampa where we spent Thanksgiving and drove on up to Disney World. Here's the welcome sign. The kids were getting totally stoked with every second that passed! 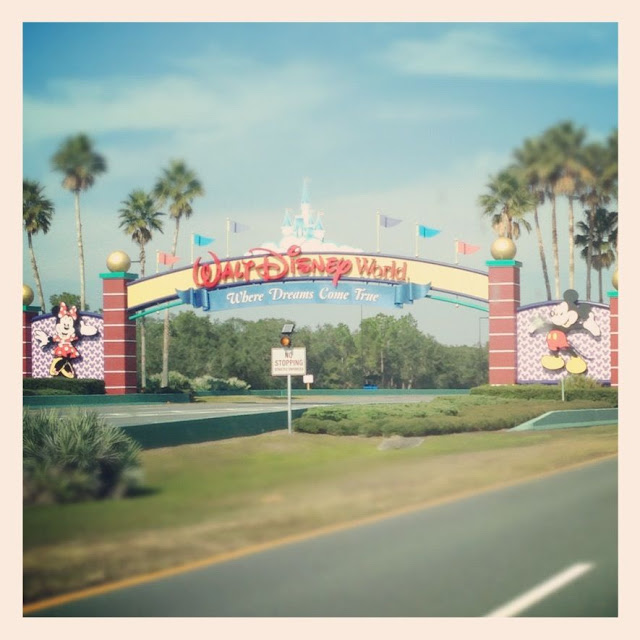 We were able to check in early and headed off to our preferred room at one of Disney's value resorts, the All-Star Movies resort's Toy Story building. Let's just say THAT was a huge success. The kids loved seeing the ginormous Buzz and Woody statues. Here they are on our way to our room. Do they seem a tad excited to you, too? 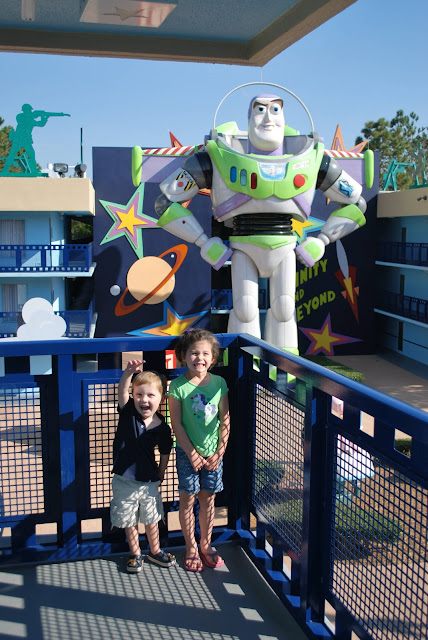 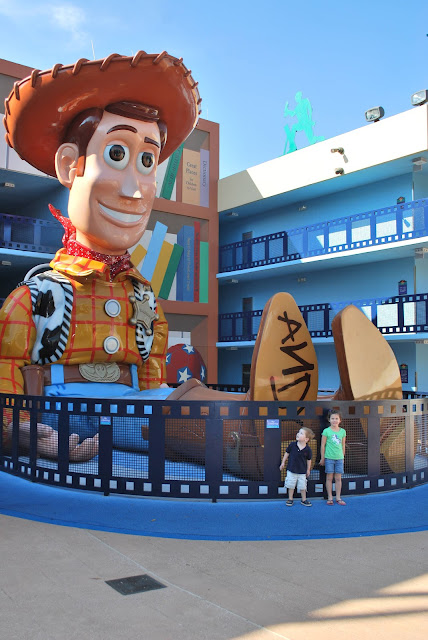 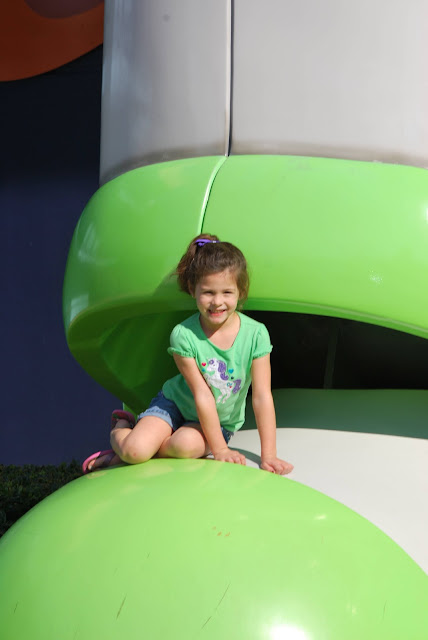 This kid wasn't quite sure what to do with himself. So. Much. Toy. Story. Everywhere! 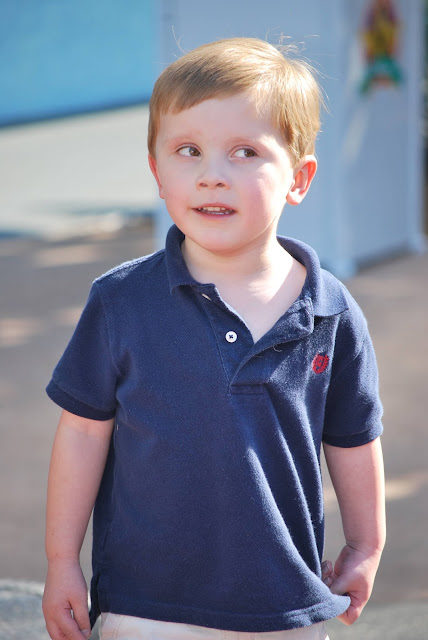 After we settled in, we headed to Downtown Disney to grab dinner at the famed T-REX restaurant, complete with huge dinosaurs that come to life periodically and an ice cave that changes colors. 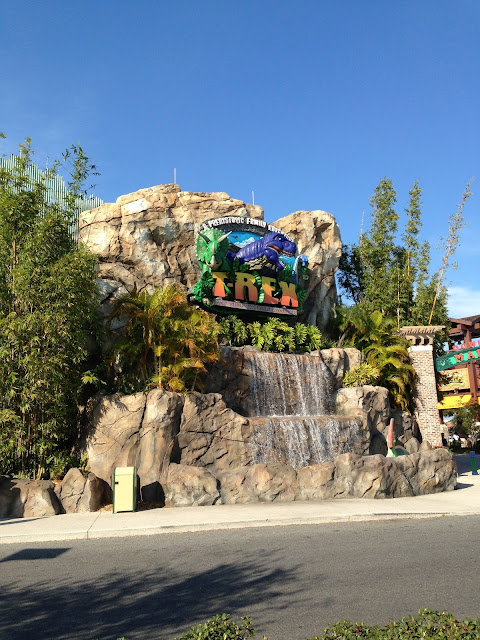 The kids loved watching all of the dinosaurs move and the light shows that happened occasionally throughout dinner. 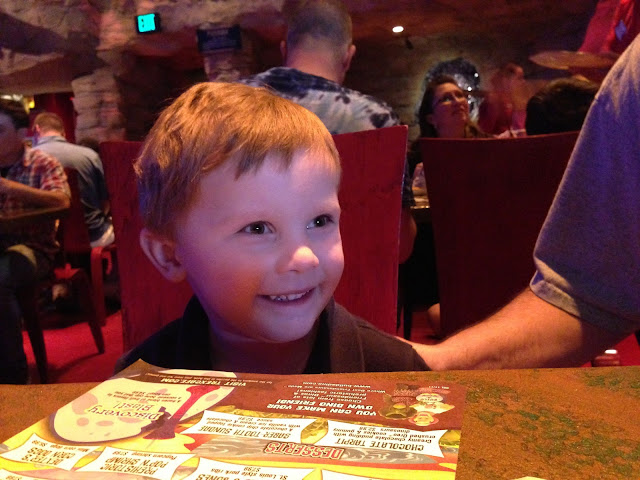 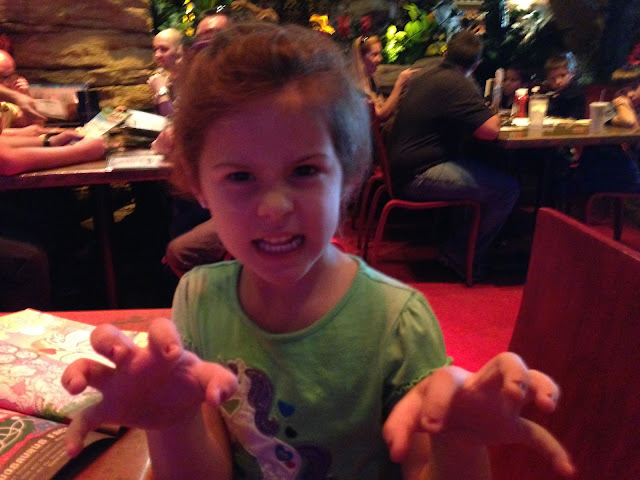 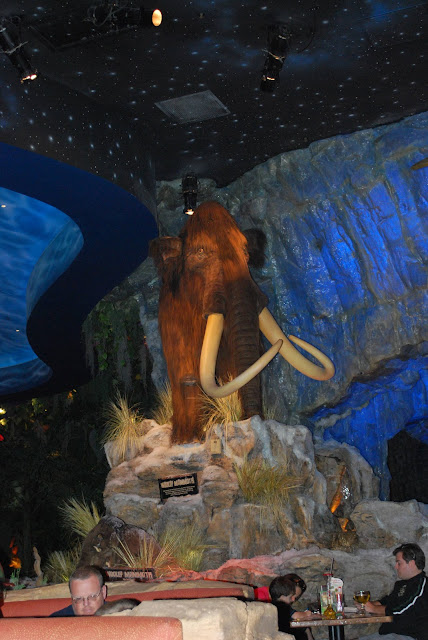 Another big dinosaur of some sort! 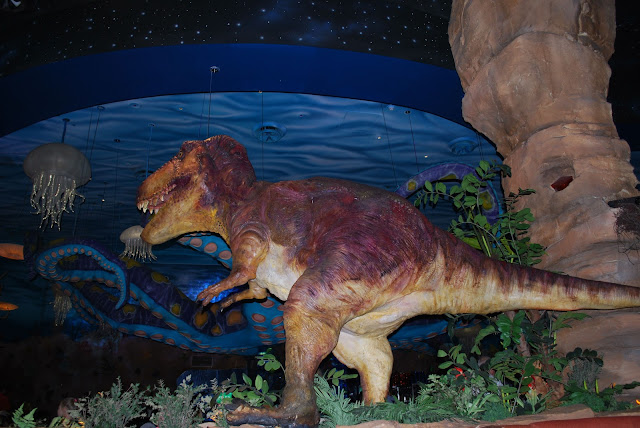 We had an amazing dinner that didn't cost us a penny (except tip) courtesy of the Disney Dining Plan. That thing was awesome! We spent about $200 adding it to our trip and it gave us a table service dining credit for EACH person (all 4 of us!) for EACH of the 4 days we were there. This dinner added up to over $100 and we especially enjoyed NOT paying for it (hubs will of course say we DID pay for it through the DDP, but I choose to pretend it was all free).

After dinner, we opted for a massively awesome dessert for the 4 of us to share. It came complete with smoke oozing out of the center! 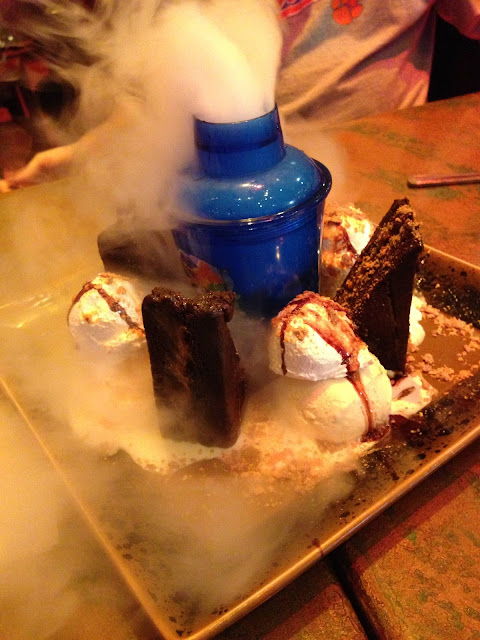 I asked the kids how they liked the dessert. Chase's reaction? Thumbs up! 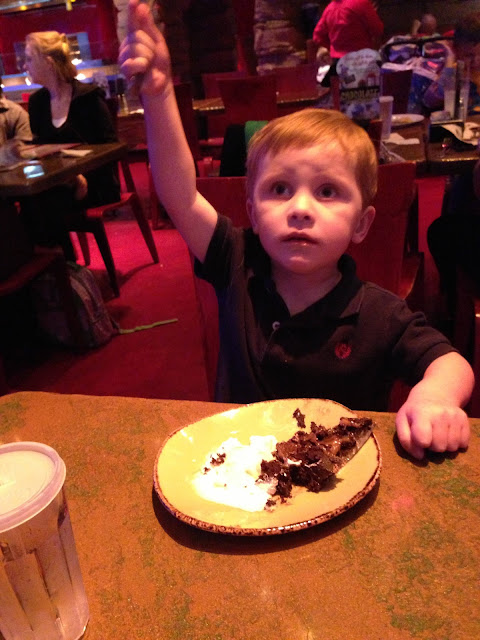 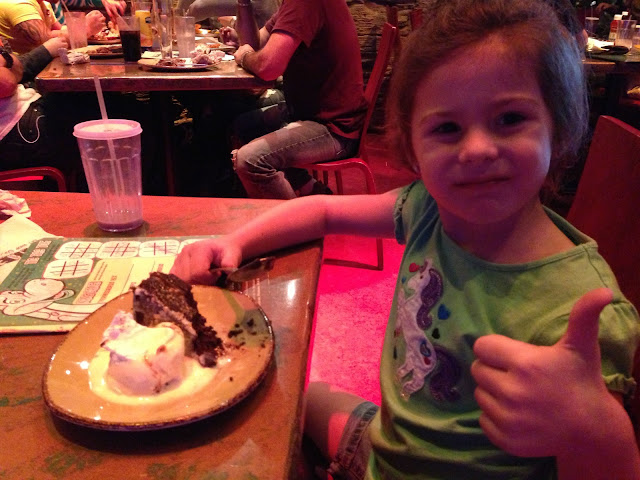 After dinner, we couldn't pass up the perfectly placed Build-A-Dino located 20 feet from our table. So the kids each made a dinosaur: a mammoth for LO and a red dino thing for Chase.

Here they are following the Build-A-Dino guy's instructions to a T! They had so much fun! 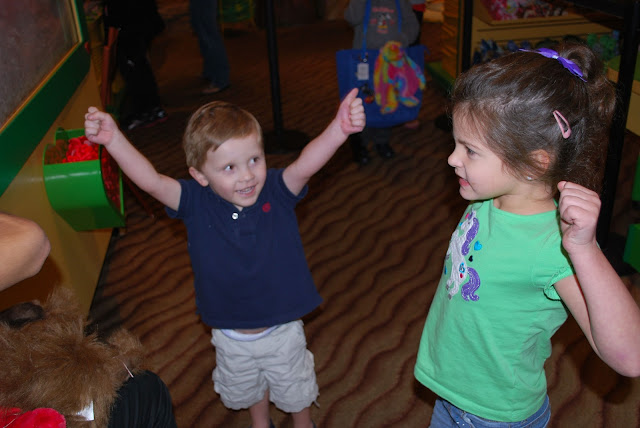 Here's Chase placing his dino's heart inside before he gets filled up with stuffing. 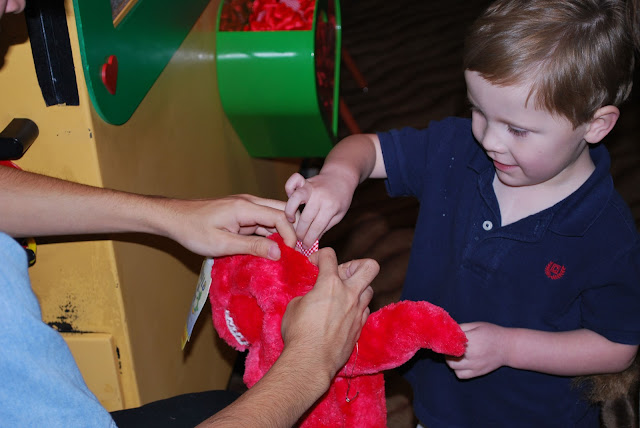 The finished product, complete with an arm that you can press to hear him "ROAR!" LO helped Chase name his dinosaur "Diamond." Whatevs. 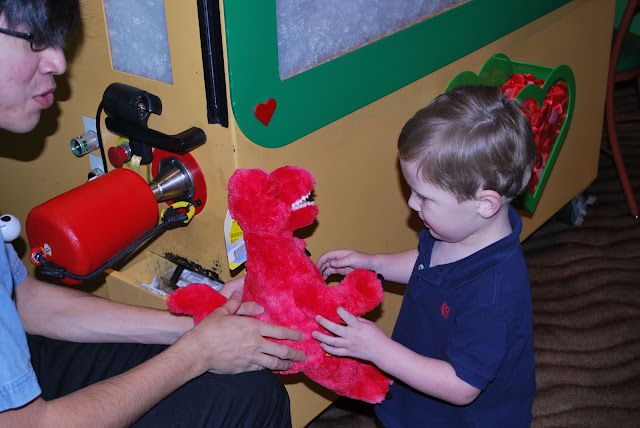 LO was pleased with her mammoth, too. She named her "Flower" and she has an arm that makes a lovely (loud) mammoth-y sound. 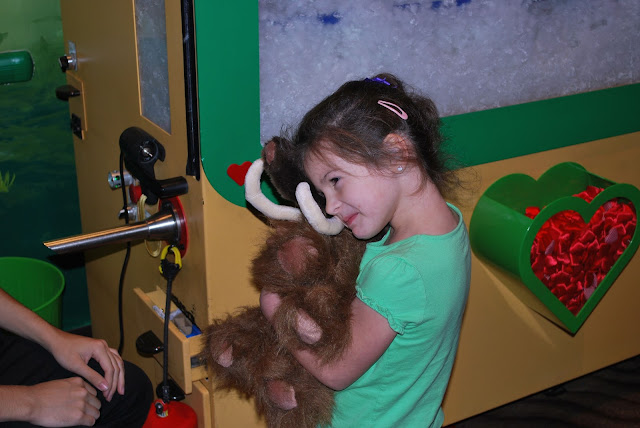 Of course they had to give their new friends a bath! 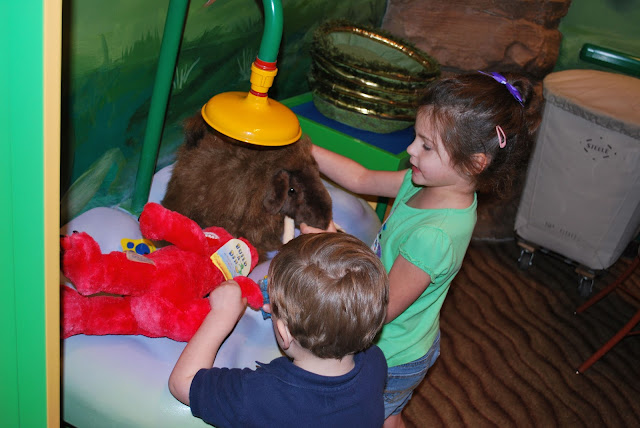 We walked through the World of Disney store while we were at Downtown Disney, but managed to make it out without a purchase, believe it or not! We didn't stay out too late since we knew we'd have an early morning at the Magic Kingdom the next day, so we headed back to the hotel. We couldn't get to our room without the kids needing to climb and play on the fun Toy Story stuff. Here's a pic of the kids on Rex. You can see Chase was less than thrilled with being hoisted up there... ;) 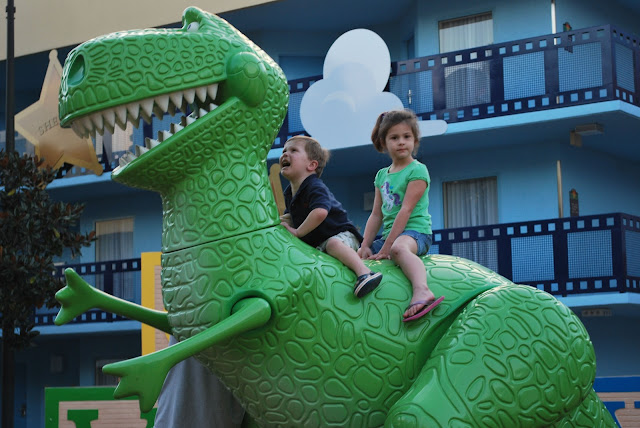 Pics next to the BUZZ blocks! 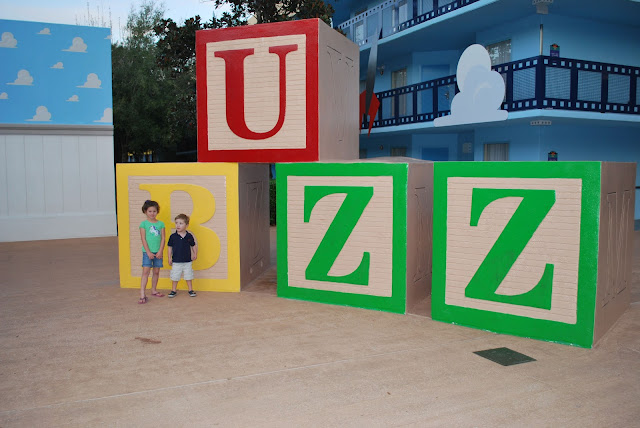 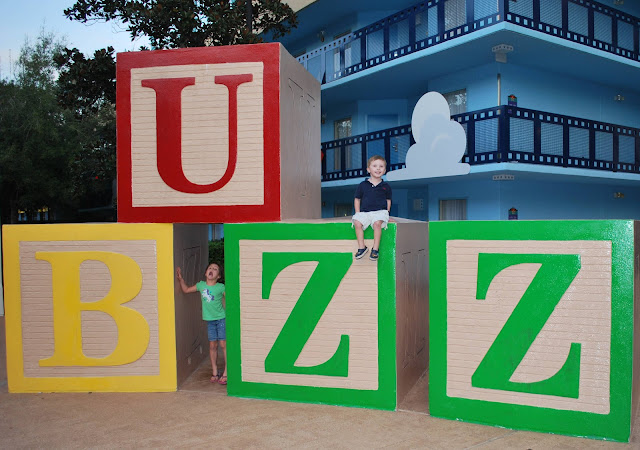 This one's my fave: 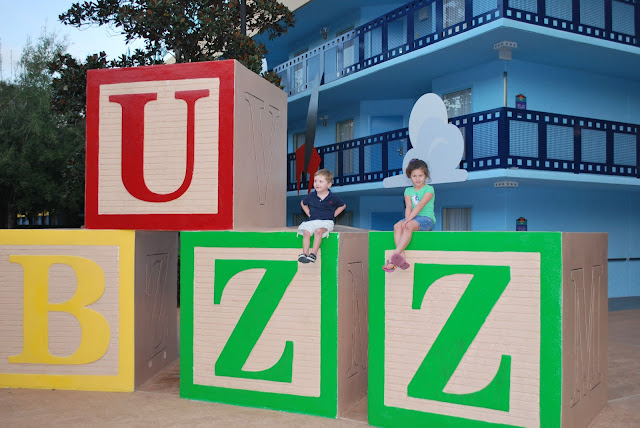 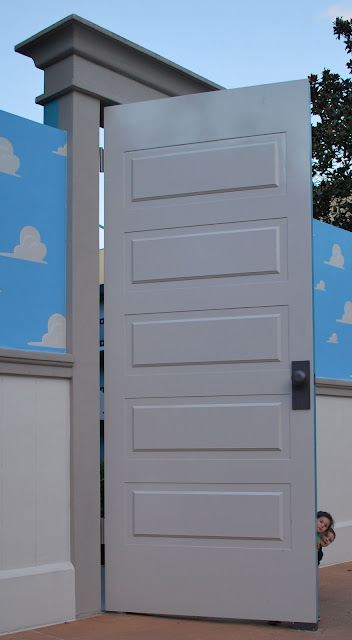 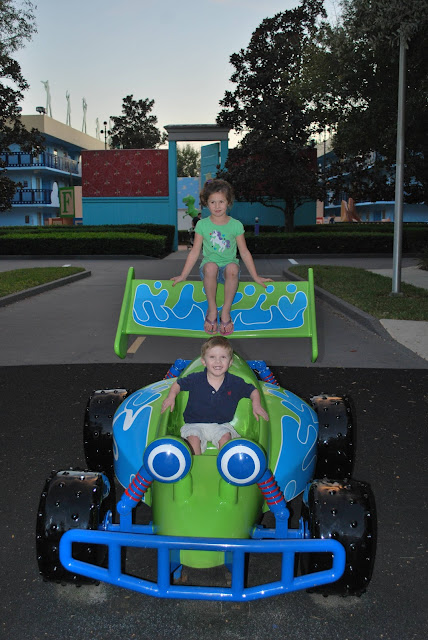 One last "stop taking my picture mom because my face is hurting from all of the smiling!" pic of LO before we headed in for the night. LOL! 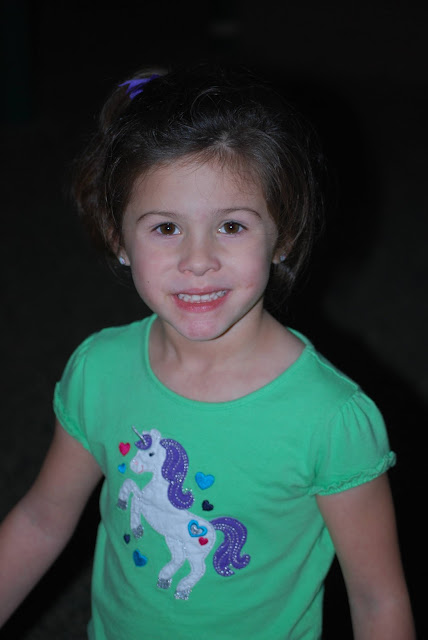 We all turned in around 9PM with big plans of an early Sunday morning at Magic Kingdom! More to come soon!
Posted by mom2lo at 9:40 AM