I embraced a Paleo diet several months ago, and found great success with how I was feeling along with several pounds of weight loss. It was awesome! But then the holidays hit and I fell off the wagon. Big time. And I felt it. The sluggish lack of energy, the bloating, the weight gain and just an overall sense of yucky blah. Not cool.

Then we had a long weekend mid-January. It involved a family road trip to Cincinnati, LOTS of fast food, ice cream sundaes, candy and junk food. While it all was, of course, incredibly delicious at the time, the immediate remorse and guilt I felt was overwhelming. Not to mention the increased weight gain, fatigue and overall dependency on cocaine sugar in any form I could get my hands on.

So with some thought and thorough research, I decided to do something I'd been considering for months but have been too afraid to do: embark upon the 21 Day Sugar Detox. 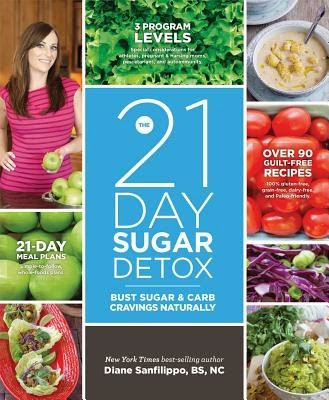 I started on Monday, January 20th. And sort of accidentally on Level 3 (the most strict of the 3 levels). This post is an ongoing log I've kept of my experience with the sugar detox for my own reference and also as (hopefully) a source of inspiration for others considering ending their sugar cravings, eliminating processed foods and returning their bodies to functioning the way they were intended. I had originally planned to publish my entire 21DSD as a single post, but I'm afraid it would just be too lengthy, so I've decided to break it down by week.

So without further ado, here we go!

NOTE: Although it's not necessarily recommended or encouraged, I have decided to weigh myself at the same time each morning throughout the 21DSD and track my weight changes. Obviously there are a ton of reasons for weight fluctuations and not necessarily just fat loss, so I'm not in any way going to judge my success on those numbers. Mostly I'm just curious.

Weight: Initial starting weight logged. I may have cried a little lot.

Physical: Normal energy level (i.e. not a lot), feeling waaaaay uncomfortable overall from the poor eating and its effect on my body.

Mental: Tired of the excuses and the dependency on sugar. Tired of the fatigue. FINALLY ready to make a change!!!

Physical: Normal energy level, still feeling bloated and can feel those extra pounds of yuck I'm carrying around with me -- especially around my belly.

Mental: I was pleased to see the loss of 4 pounds after one day of clean eating on the 21DSD! I know this isn't typical weight loss but I also know my body was in BAD SHAPE with my horrible eating the weekend leading up to it. So it was a pleasant surprise and a definite encouragement to keep at it! And WHOA!!! Hubs is jumping on board with me! I'm so excited to have someone to suffer through this with! Yay!!!

Physical: CARB FLU!!!? OMG I don't know if that's really a thing, but I woke up this morning feeling HORRIBLE!!! I was sweating and achy all over. The mere thought of removing myself from my bed was overwhelming! I checked my blood sugar (which I haven't done since my days of gestational diabetes while pregnant with E) and it was 71, which is pretty low for me. I went ahead and ate an egg/sausage cup and a green apple, but it took a while before I felt capable of functioning. A hot shower was a big help! Once I got going for the day, my energy level seemed to keep up and I felt good! I think it was all about the low blood sugar that caused the issues this morning and not necessarily anything relating to the 21DSD.

Mental: Today ended up pretty good overall. I was majorly bummed about the episode this morning, but once I attributed it to my blood sugar, it made sense. I powered through it without any thought of giving up. If anything, I feel more encouraged than ever to keep at this! I've had almost no cravings for sweets and even the little ones I've had, it was super easy to talk myself out of them. I've been super proud of hubs for now going TWO DAYS without a single COKE (or any other soda/caffeine)!!! I'm shocked and so proud and hope he keeps it up!

Physical: Woke up refreshed and feeling good this morning! I checked my blood sugar to see what my "norm" should look like and it was 83. Nice!

Mental: I won't lie -- I was a bit depressed to see that teeny tiny GAIN today, but the fact that I'm feeling good physically and know I'm doing the right thing for my body made it easy to deal with. Also, I realized today that there's a "Non Sweet Treats" section of recipes in the 21DSD book! Granted, they're nothing like what I was used to, but I did make a green apple crumble that was quite delish! I also tried the Chocolate Almond Butter Cups, which (sorry, Diane Sanfilippo) were HORRIBLE. My kids clearly weren't fans either... LOL!!!

Physical: Still not jumping out of bed in the mornings to welcome a new day, but honestly that's no surprise. I feel good once I'm up and functioning for the day. My hunger levels are SO under control and SO manageable -- what a shock! And it feels good to want to make good food choices and not feel in any way that I'm forced to. I'm excited about new recipes to try and haven't felt restricted with food hardly at all! I will note that I had some hardcore cravings after dinner tonight but was able to control them. Still no cheats! Oh, I also made zucchini noodles using my new spiral vegetable slicer. I simply sautéed them with a bit of oil and fresh basil and they turned out amazing! I made a bolognese sauce and seriously it was exactly like eating spaghetti!! What a WIN!

Mental: Happy to see another loss on the scale this morning! Honestly I'm still in an excellent frame of mind and am happy with what I'm doing. Last night we dined out for the first time and did GREAT -- even with several temptations all around. I'm so proud of the progress, but I'm also a bit skeptical on how we'll keep this up longterm after the 21 days. I mean, we definitely won't have to be as restrictive when we finish the 21DSD, but I'm afraid one bite of cake will send me spiraling back into my old ways and I just don't know how I'll handle it. But I guess I can worry about that later... ;)

Physical: No real changes, improvements or anything. Kind of bummed but glad I'm not in a major slump.

Mental: Another little gain this morning. No big. This isn't about weight loss. Although I was super discouraged this evening after spending almost 2 hours in the kitchen making homemade broccoli-cauliflower soup and Paleo "fried" chicken for dinner. Both turned out AWFUL. It was such a punch in the face! I left the table feeling disappointed and gross. The food was terrible. I was just mad and this dumb 21DSD and made the CHOICE to cheat. Two little Reese's valentine hearts later I still felt disappointed and it was all I could do not to get in the car and drive to Culver's for an ice cream treat. Have I mentioned how much this SUCKS!??

Physical: I still feel more "puffy" and bloated in the belly than I did after my 4-day junk food binge weekend leading up to my 21DSD. UGH! I know I need to start working in an exercise routine if I want to see more success, but it's so hard to find the time and not be so lazy that I actually do it! Overall it was a great day today. I feel like my energy level should be adequate enough to see me through beginning workouts of some sort, but I have no idea where to start!

Mental: Mentally I did really great today! The added weight loss is always a plus... I'm down almost 6 lbs. in 7 days! That's a win! And I have renewed my commitment to the 21DSD after the horrible night last night. I ordered the 21DSD Cookbook from Amazon so I'll be excited to try some new recipes later this week! I just wish there was someone to take care all of those dirty dishes! I've honestly been unloading, loading, running, unloading, and loading the dishwasher EVERY DAY since I started. It's insane!

Overall I'm pleased with the fact that I've stuck with the 21DSD this far! That feels like such an accomplishment in and of itself! And the fact that hubs is on this journey with me is absolutely priceless! I can already see where this different way of looking at food is already impacting the choices I make for the whole family -- picky kids included! I can't wait to see how we do with week 2 and how great it'll feel to COMPLETE this journey! Woot!
Posted by mom2lo at 6:22 PM