The One with the Unidentified Allergic Reaction

Last Thursday, June 7th, we were celebrating our niece's graduation at my sister's house. It was a lovely day! LO had a riding lesson at noon, we came home and waited for hubs to finish with a work call, then the 6 of us headed to the graduation party.

Not more than 15 minutes after arriving, I happened to notice my mom and sister staring at Chase, inspecting his hands and feet. I came over to see what was going on and was SHOCKED to see that my son's hands and feet were swollen beyond anything I've ever seen in my life! He was also covered in hives over his face, neck, chest, back, and abdomen. I asked my sister for some Benadryl and took him upstairs. Chase was complaining that his hands and feet hurt (of course!) and he was cold (though he had a low-grade fever). After a hefty dose of children's Benadryl and some ibuprofen, I took him to a room to lie down and covered him with a blanket. I snuggled up next to him and called his pediatrician's office. Of course, it was just after 5pm, so I had to keep calling back until they turned the phones over to the answering service. I left a message for the nurse to call me back.

Chase was acting fine overall -- just sluggish/tired, cold, and achy. He was sipping on water and his breathing was normal. Then I looked at his fingers. His nail beds were BLUE. As in, pre-Fontan heart surgery blue. That was it for me. I told hubs we were taking him to MD360 to get a pulse ox on him and see what on earth is going on!

We left our 3 kids under the watchful eyes of my mom and two sisters and headed to MD360, which was only about 10 minutes away. The poor kid couldn't fit his swollen feet into his crocs, so I carried him inside to get him registered. While filling out paperwork, I informed the check-in lady that I needed to get him on a pulse ox ASAP, so she called back to the nurse. A few minutes later, hubs came in (after parking the car) and reiterated the urgency in getting a pulse oximeter on Chase because he's a heart kid. Within a few seconds, a nurse came out to look Chase over. She immediately said for us to come back. I carried Chase to a hospital-esque room (not the typical exam room) while hubs finished with the paperwork.

The nurse asked the same series of questions hubs and I had been pondering ourselves: has he eaten anything new/different? have we switched laundry or bath soaps? had he been exposed to any environmental allergens, etc. We had (and still have) no idea what caused this reaction! She checked his bp and o2 -- both of which were in range (for him). Thank you, Jesus!

The doctor came in a few moments later and assessed him. He essentially told us he has urticaria -- a.k.a. hives. He said it was viral and wanted to give Chase a steroid shot, after clearing it with his cardiologist.

We spent the next little while watching Chase enjoy Teen Titans and struggling to identify what caused all of this. Our poor boy. He looked absolutely pitiful, y'all. 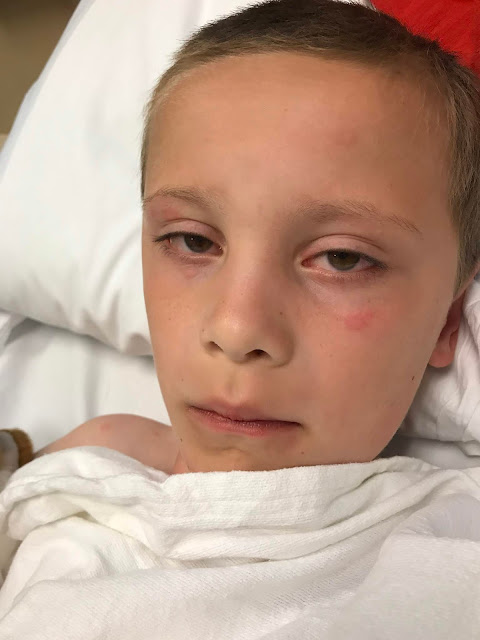 He was covered all over in hives. 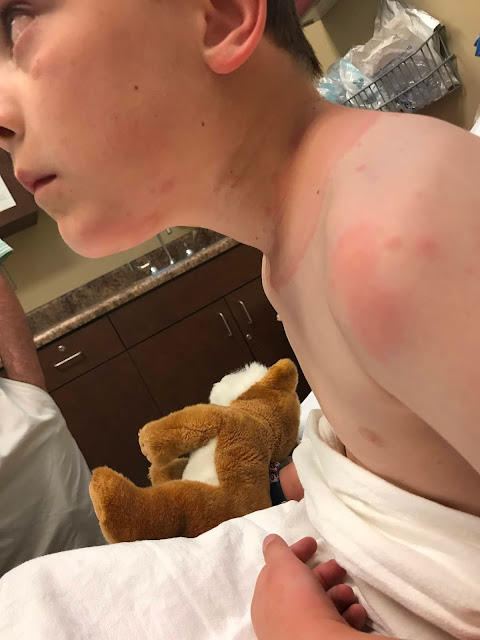 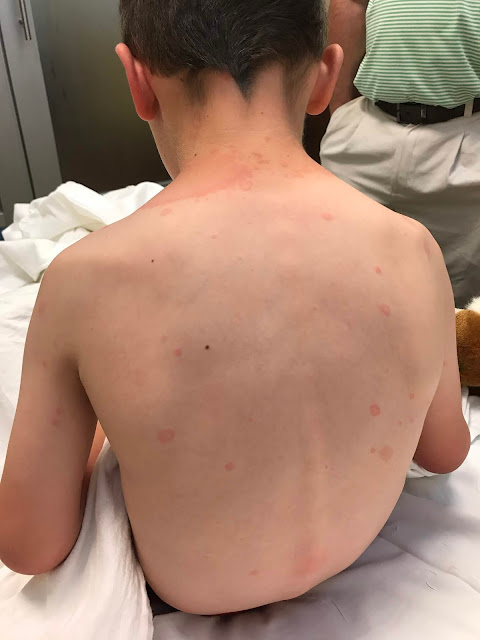 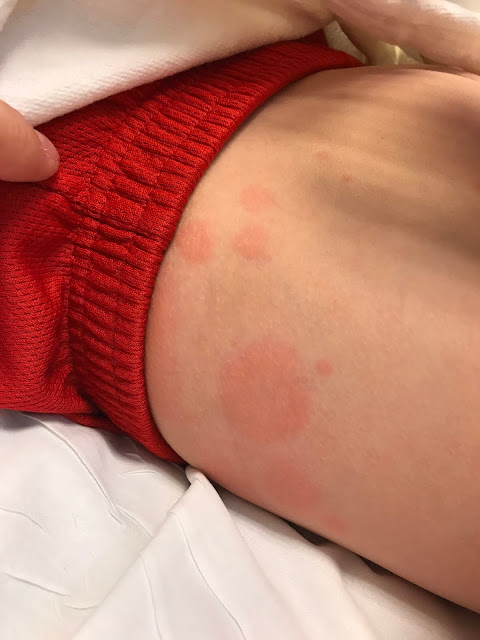 His hands were SO swollen. 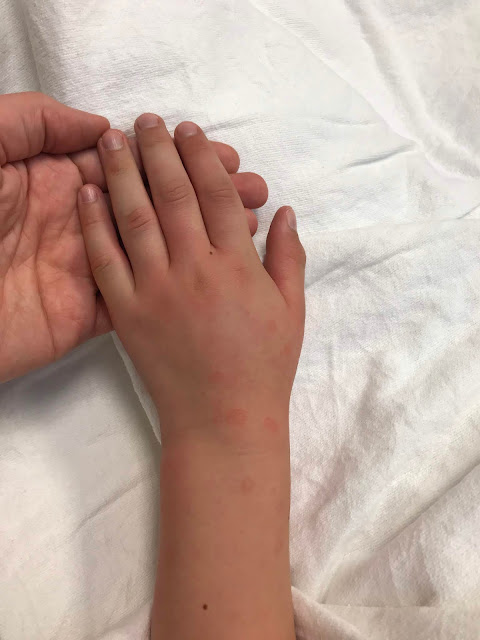 And his feet were unrecognizable! Have you ever seen anything like this?? 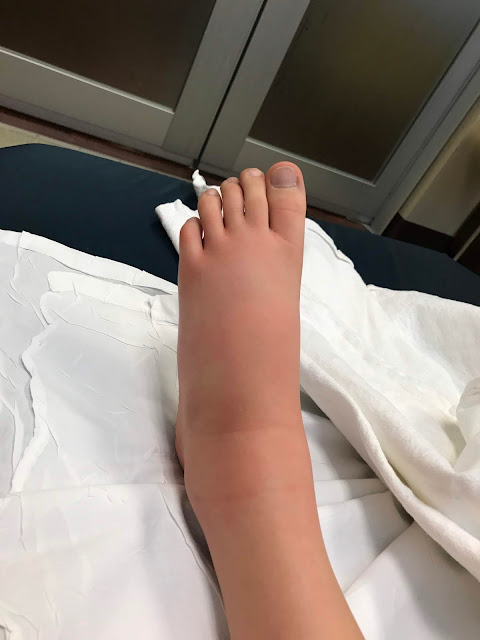 Even his knees were swollen! I've never seen anything like this before in my entire life!! 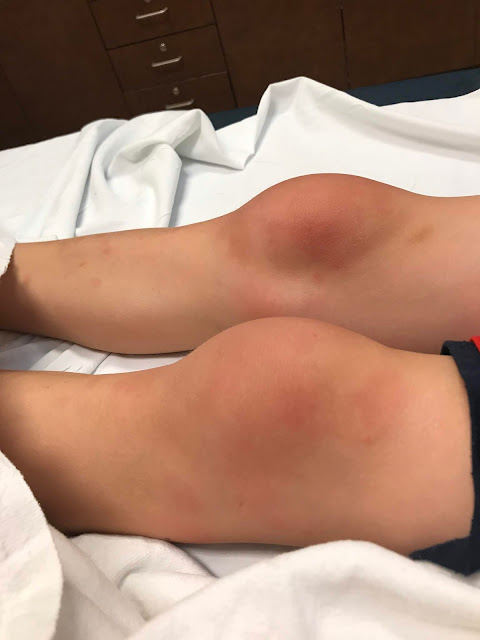 Bless his sweet heart! The doctor got approval for the steroid shot from cardiology, so my sweet boy had to get an unwelcome shot in his thigh. He was NOT a fan -- and I can't blame him!

We had to wait around 30 minutes to ensure the steroids were going to work. We also were given a prescription and were told to continue to give him Benadryl and Claritin for the next few days to ensure it doesn't reoccur. Once we had the all-clear, we stopped by the pharmacy and hubs and Chase were dropped off at home to get him settled on the couch and comfortable while I went to pick up the kiddos from my sister's house.

What an eventful evening! I'm just so grateful to the Lord for watching over our sweet Rock Star so this didn't turn into something much worse. He is faithful! And Chase was back to himself the next day. YAY!!!