The One with the Laundry Room Reno: Part 2

Okay. If you read Part 1, you know that we recently completed a major overhaul to our laundry room, including new paint, a new pocket door, and a super useful laundry basket storage nook.

For starters, let's take another look at the BEFORE and AFTER pics: 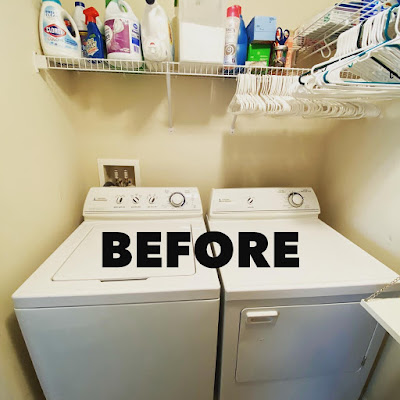 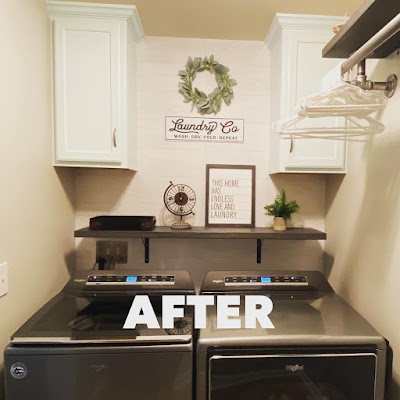 Quite a change, yes?

In my previous post, I shared about the pocket door and laundry basket storage nook. This post will be dedicated to THE TWO BEAUTIFUL APPLIANCES you see in the AFTER pic above! And apparently there will need to be a Part 3 to discuss all the other pretty stuff happening in our renovated laundry room. 💗

⚠WARNING⚠: There was A LOT OF DRAMA involved in the purchase of our new washer and dryer. Consider yourself warned!

Okay, so we needed new appliances. Our current washer and dryer were manufactured in 1999. While they are solid workhorses and have been excellent for our family these past many years, now that there are 7 of us, we simply needed more capacity to keep up with all.the.laundry.

So, over the past 6 weeks, I have ordered FOUR SETS of appliances.

I'm detailing this here for my own sanity purposes. And because it's my blog so I can do what I want. But mostly because I love documenting our family's experiences so we can look back at them here years later.

On March 30th, I ordered a set of Samsung appliances from Home Depot, to be delivered on April 20th. 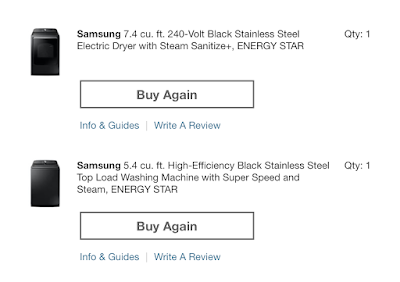 After several weeks of excitement and anticipation, the fact that Home Depot didn't allow returns for appliances had really started to stress me out. I was afraid I wouldn't like something about the Samsung units, but would be stuck with them. So within 72 hours of my scheduled delivery, I canceled my Home Depot order.

On April 20th, I ordered the same washer and dryer directly from Samsung, since they DID offer a return policy. Yay! 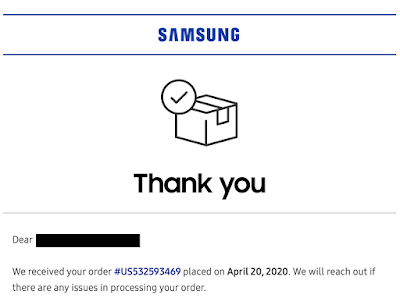 I sat on that order for a total of TWO DAYS before I canceled it because, after additional research, I found the Samsung washer lacked one of the critical features I wanted: a detergent dispenser that would automatically dispense the right amount of detergent for each load, rather than having to add it each and every time. Yes, #lazy.

After seemingly endless research, I finally determined Whirlpool made the washer (and dryer!) of my dreams. On May 2nd, I ordered them from Lowe's, since they offer a return policy for appliances. I wasn't too concerned about needing to return them, but since I can't shop in the stores and talk to the sales folks about this large purchase, I just needed the safety net.

These babies were scheduled for delivery on May 19th. It would be a long 2+ weeks of waiting, but we were in the midst of several of our laundry room projects, so I suspected the time would fly by. 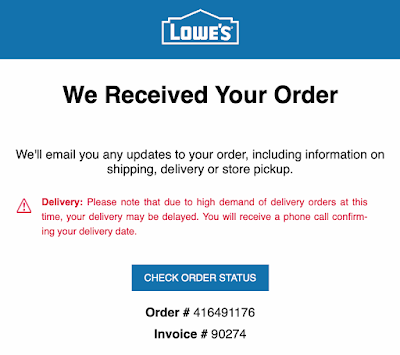 I was SO excited about the Whirlpool set! So much so, that everything in our laundry room was renovated with those exact machines in mind--from colors, to dimensions, to finishes... EVERYTHING.

Five days before my scheduled delivery, on May 14th, I contacted Lowe's 800# to confirm they were going to actually INSTALL the appliances, not just deliver them.

NOTE: At the time, I was working hard to convince myself I'd be okay with a Lowe's employee or two in my house, as long as they were masked and had shoe covers on, because I couldn't imagine hubs and I attempting to deal with moving washers and dryers ourselves up/down a flight of stairs, especially given my condition of being almost 8 months pregnant.

I spoke with a lady named Terry at the call center who insisted I HAD to add additional items to my order if I wanted the appliances installed (hot/cold hoses, dryer steam hose, and dryer vent). Now, I already owned all of these items and they were all in perfect working condition, but I begrudgingly agreed to allow Terry to add these (unnecessary) items to my purchase in order to ensure installation. Of course she stated I could simply return the items to my local Lowe's after the delivery. Thanks for adding an unnecessary trip out of the house during a worldwide pandemic, Terry. However, by adding the items to my order, she essentially CANCELED my original order, and created a NEW order, with a scheduled delivery date of my new appliances now moved out 38 DAYS to JUNE 26TH! 😡 You guys, on that date, I am planning to be discharged from the HOSPITAL after BIRTHING A NEW LIFE.

After several rounds with her, her inability to connect me to ANY supervisor, several more calls, a few online chats, and multiple calls with the local Lowe's store managers (at two different locations), it was determined there was nothing they could do about my original order. These specific appliances were backordered with Whirlpool. The quickest they could get my order to me was now June 8th... essentially 3 more weeks after my order was originally scheduled to be delivered, and 5 weeks after my original order was placed.

As you may imagine, my pregnant hormonal self was NOT having any of this! There were more anger and tears than I would care to admit. But in the end, I decided to CANCEL the order completely with Lowe's. I just couldn't even deal with this company any longer, and refused to spend this much money with them. There had to be another way.

I went back to Whirlpool's site and searched their list of authorized retailers. Best Buy showed the appliances were backordered and completely unavailable to order. Home Depot had them, but said it would be 4+ weeks until delivery. But then, I found a hidden gem in their list of retailers: Ferguson Bath, Kitchen, and Lighting Gallery! Turns out they had a location here in the Upstate! I had never heard of them, but gave them a call with all of my fingers crossed!

Guess what!? They had both my washer and dryer available in one of their warehouses!! Happy dance!

I ordered them on Thursday, May 14th, and they were scheduled to arrive FOUR BUSINESS DAYS LATER on Wednesday, May 20th! YAY! This would definitely help us stay on schedule with our renovation, and help us to finish up the job so I could FINALLY focus on preparing for Cinco's arrival in just a few short weeks!

Without any issue, the appliances arrived as scheduled last Wednesday!

But, because of our luck, when the delivery driver unboxed the washer... it looked as if it had been mauled by a fork lift!! 😭 See? 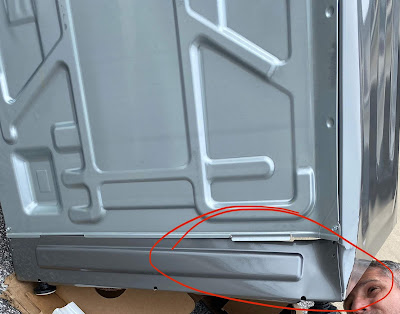 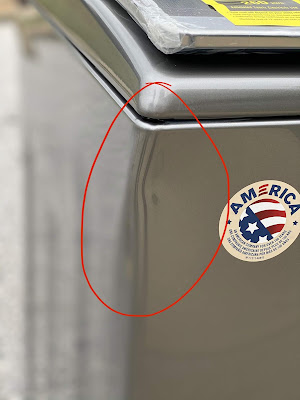 NOTE: I should mention that we sold our washer and dryer last Tuesday, in anticipation of our new ones arriving on Wednesday. So it had already been a few days of no laundry (not good!). I was super bummed with this development in the process.

Wonderful. So we had no choice but to refuse the washer, and accepted the dryer. However, I was able to call Ferguson and it turned out they had another washer they could send my way! It would be here in TWO business days. YAY!

The new washer arrived in Greenville bright and early last Friday, May 22nd. I asked if they could PLEASE deliver it the same day since we were headed into a 3-day holiday weekend. Unfortunately, they had several drivers on vacation and couldn't schedule us until the following Tuesday.

Hubs and I decided we didn't want to wait the extra 3 days, so he rented a truck from Home Depot and went to pick it up himself.

When he arrived, he asked to have the washer unboxed so he could check it for damage before he'd accept it. The guy who was helping him was NOT a warehouse/delivery person, nor apparently skilled with a utility knife (as you'll soon see), but he grabbed a nearby utility knife and went to work.

He went to work CUTTING INTO BOTH SIDES AND THE FRONT OF OUR NEW EXPENSIVE WASHING MACHINE WITH THE UTILITY KNIFE. 😱😱😱 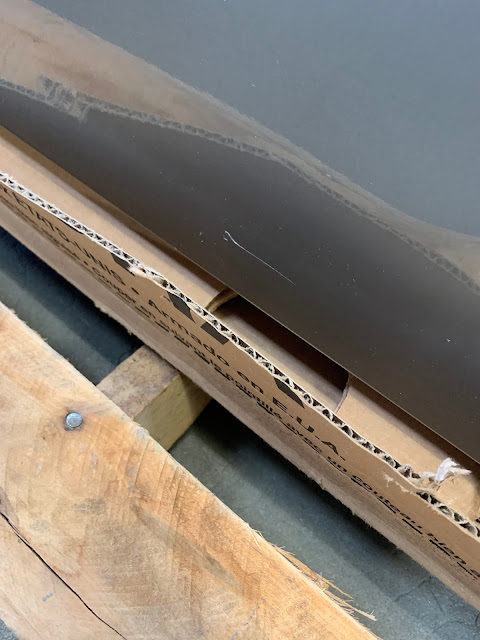 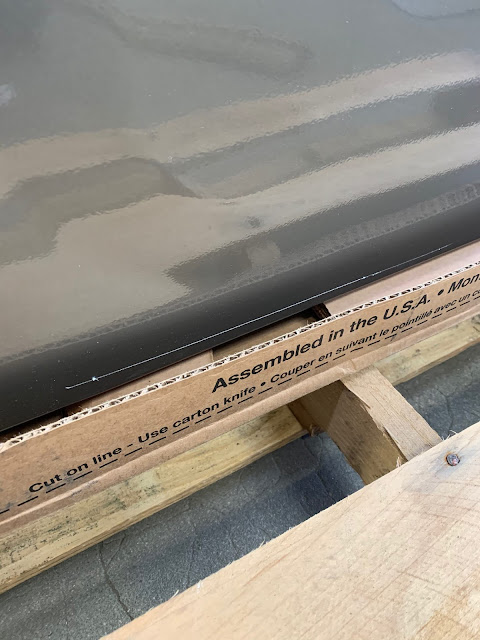 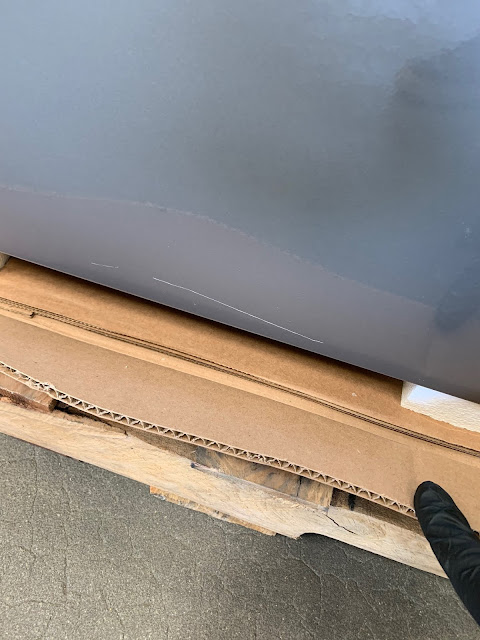 As you can imagine, I was NOT thrilled to get this phone call from hubs! And you can CLEARLY see on the image below that the box CLEARLY stated EXACTLY WHERE to cut, towards the BOTTOM of the box, complete with a DOTTED LINE all around all four sides of the box as a helpful guide. 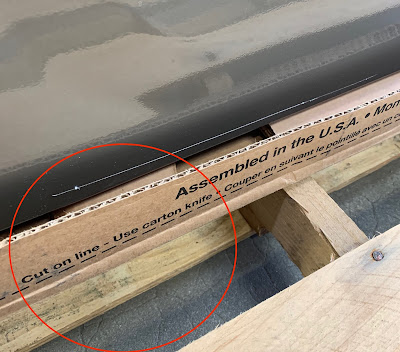 Yet this guy cut a good inch or more ABOVE the line, right into our beautiful new appliance. 😭

It's just never easy, is it?

I immediately picked up the phone and was on a call for an actual hour and 8 minutes with a rep at Ferguson, during which time hubs was literally just stuck standing around in the warehouse, waiting. I was told there were literally NO managers who could approve a discount on our now damaged appliance. She finally told me the branch manager, Jake, was on vacation, but he would call me when he got to his gate at the airport after reviewing the images and information on our case.

Um, how long would THAT take??

Meanwhile, let's remember we're paying for the HD truck by the minute...

I just can't make this stuff up, folks!

Let me just end this drama here by saying we eventually accepted the washer, but only after hubs was able to get someone at the Ferguson warehouse to write up a "contract" they both signed, indicating we were expecting a discount to be applied to our purchase once the manager(s) returned to work next week. Their solution had been to just send us home with the damaged washer to use for 2 weeks while we wait for them to have a replacement shipped to us.

So lugging a washing machine upstairs, using it for 2 weeks, then lugging it back downstairs, only to lug another one back upstairs, after having already moved our existing washer and dryer downstairs, all during a worldwide pandemic when I refused to allow anyone in my home, meaning hubs and I would be responsible for ALL of this appliance moving ourselves... um, NO THANK YOU. I told hubs I'd be happy with a nice discount on our purchase considering it was their mistake. I didn't want to deal with a replacement. So we'll see what they come up with next week when the managers are back.

Long story already-too-long (sorry!), hubs and I, along with a pivitol furniture dolly, managed to get our new washer and dryer upstairs to the laundry room, despite my being 34 weeks pregnant at the time! I didn't do any super heavy lifting... just some pushing and shimmying.

END OF (this) DRAMA.

P.S. If you're really, really bored, check out Part 3 here!