What a difference 48 hours can make! Here is Chase after his cath procedure on Thursday... 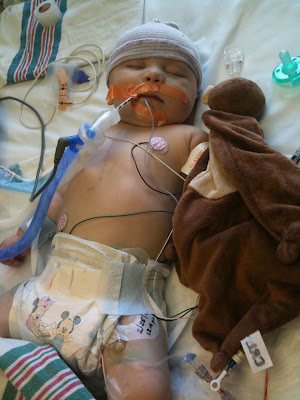 And here he is right before bedtime tonight: 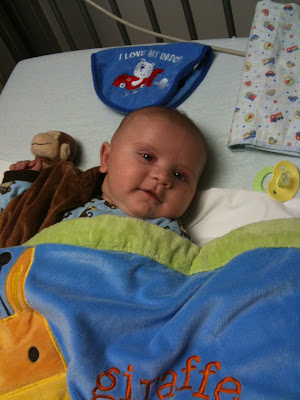 Our sweet boy is back!!! I'm happy to report that he was completely weaned off his oxygen today and is holding his own! His o2 saturation stays around 80, which is fantastic! He's eating well, resting well, and even playing and smiling well! We're so happy!

So I'm also super-happy to say that all the "drama" of Dr. Jerk is finally over. Hubs and I have spoken with several other docs over the past 24 hours and ALL of them have been extremely encouraging and put our minds at ease. Here's a quick breakdown:
Whew! Take THAT, Dr. Jerk! So it all basically boils down to Chase having the Glenn surgery. Plain and simple. No additional complications going into it that would make it significantly more risky than it already was. This puts my mind at east like you wouldn't believe! So now I can just focus on worrying about the Glenn and not "all the other stuff" that I was totally and completely freaked out about yesterday.

Lastly, I wanted to mention that The Man, Dr. Bradley (Chase's surgeon) stopped by our room on 7C today. Hubs and I had a chance to talk with him and he basically said what I listed above in the bullet points. Whew! Also, he said he will most likely put Chase on the surgery schedule for Wednesday, March 3rd. There's a chance we'll get bumped or postponed until the following week, simply because Dr. Bradley is the only cardiothoracic surgeon at MUSC right now and there are a LOT (unfortunately) of little ones that need his surgical expertise. But for now, we've been told our plan is to sit tight on 7C until the big day arrives.

So that's the latest and greatest. By George, I think I've finally caught you all up to this very moment! Now it's time for some SLEEP for this tired mama! :)
Posted by mom2lo at 11:30 PM