A Bunch of Random Updates

First of all, I just want to say "Praise the Lord!" for His amazing work in sweet Brandt's life! I don't think his website is quite as up-to-date as his mommy's Facebook posts, but that sweet boy is doing AMAZING with his recovery from his Norwood surgery. He will probably head up to 7C (step-down unit) tomorrow or Tuesday!!! Just to remind you, he just had his surgery last Tuesday! Can you believe that?! What a sweet little miracle! Way to go, Brandt!!!

So to update on things here with the fam, life is good! LO and I went to the beach for a quick day trip on Friday, while the little man stayed home with daddy. We had a great time at the beach and LO behaved surprisingly well considering she didn't have a nap all day! It was a long day, but oh so much fun! Here are a few of my favorite pics from the day: 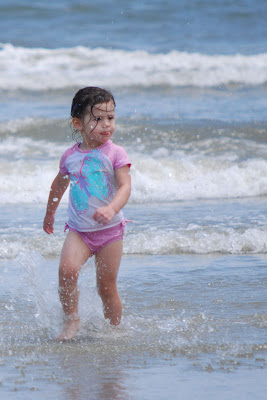 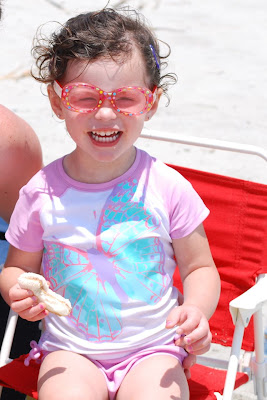 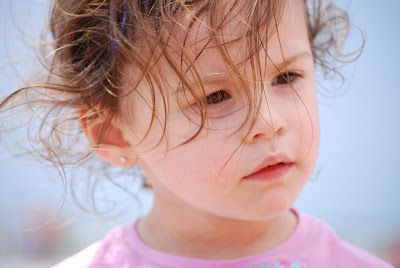 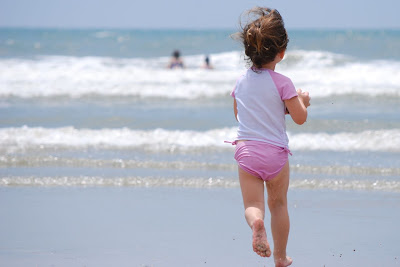 Today we were SO excited because we were FINALLY able to take Chase to church for the first time! That's right! Our little family of four made our first appearance all together at church! After church we decided on an impromptu lunch out with one of our favorite families. It was such a wonderful welcome back to "real life" or "normalcy" or "whatever you want to call it!" I got to just be a mom, with two kids, and a husband, who go to church together, and grab lunch with friends, and not worry about all the details. In fact, we didn't even have any food for either of the kids! We almost always bring a PB&J for LO when we plan on dining out (she is hands-down the most pickiest eater on the entire planet!), and of course bring some baby food for Chase. We ended up with a quick stop at Walmart for some baby food and baby spoons before heading to McAlister's (yum!) for lunch! How fun to finally just be a normal family again!!!

Chase is doing simply fantastic! It's so hard to believe we still have another month to go before his next cardiology appointment! It's already been over a month since we've seen Dr. Horne -- crazy!!! We have ZERO doctor appointments for the entire month of June. What a concept! Chase is doing super with eating (no surprise). He's still taking bottles of formula (although not nearly as many ounces per day as I think he's supposed to, but I try not to worry) and is also all about some "real" food! He loves the fruits and vegetables I made for him (very Stage 1-ish), and I've started giving him some store-bought Stage 2 foods. GASP! I know, I know... I'm not making ALL of his food. Honestly, I just can't find the time in the day to do it! Plus there is such a variety of options out there and I really want him to have lots of different flavors to experience, so it's just easier this way. I've also given him some Gerber Puffs and it's so cute watch him try to rake them up on his high chair tray and get them into his mouth. He's still too young to have a good pincer grasp, but fisting it seems to work for him, most of the time.

We have an "Early Interventionist" or EI coming to the house every other week to work with Chase and give me some exercises to do with him to help him meet his milestones. He still hasn't been sitting up independently, so at her first visit, she showed me some ways to help him work on this. After working with him for just a week, I was already seeing a big improvement. When she came over last week, she was amazed at the progress he'd made in the 2 weeks since her first visit! He's sitting up independently!!! He did NOT enjoy working on this initially, but I just kept at it several times a day for short periods of time and he became more and more comfortable with it. In fact, now he prefers sitting up to play with his toys instead of laying on his tummy or back! Unfortunately, he's not so great at catching himself when sitting up so I still have to sit with him to help out. We'll be working on his arm strength and core stability over the next 2 weeks, so hopefully he'll make some crazy awesome improvements during that time!

Oh, in addition to trying to get him to feed himself puffs, I've also been giving him a sippy cup for the past 3 or 4 weeks. He's been doing really well with it! He definitely likes to chew on it, but he can already drink from it, too! Here's a randomly adorable smiley pic of him in his high chair: 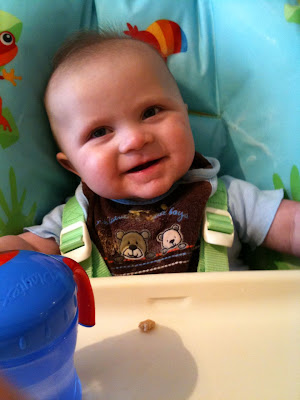 We're having all kinds of challenges with LO these days. It boils down to one simple concept: LISTENING. Apparently she's suddenly forgotten how that is supposed to work! She's been driving hubs and I C-R-A-Z-Y!!! Now I know what you're probably thinking... she's almost 3 and this behavior just comes with the territory. But I'm not buying it!!! I don't know what to do! We literally took ALL of her toys out of her room and the play area and stowed them in Chase's room where she can't get to them. She didn't even care! I'm talking puzzles, play-doh, blocks, dress-up clothes, her kitchen, stuffed animals... EVERYTHING but her books! She doesn't care! I also bought a Responsibility Chart thinking that if she can accomplish things throughout the day (getting dressed, brushing her teeth, listening, etc.) then we would reward her and encourage her good behavior! This didn't work, either! We then tried limiting her TV watching to just 30 minutes in the morning when she gets up, and 30 minutes before bed at night. Did that work? Notsomuch. We even went so far as to take her precious teddy away (she's slept with teddy basically since she was born!) and guess what?! She didn't care!!! Oh my word, I am about at the end of my rope! I feel like I can't take her anywhere fun or buy her anything fun or do anything fun with her because her behavior doesn't warrant such things, but at the same time, I can't just keep her locked up in her room all day to stare at the walls! Wow. I sure hope we figure this out soon. I'm all open for suggestions, too, by the way... ;)

Every once in a while, she behaves well enough that we let her play with her brother. That sounds bad, doesn't it? See, usually she's completely wired and squealing and jumping all over the place around him and just won't calm down, so we don't let her around him when he's playing on the floor. But when she chills out for just a quick second, I'm lucky enough to get a cute little pic like this: 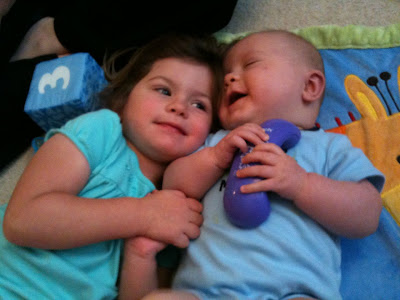 Well I guess these random updates are turning into one heck of a long post, so I'll end with this: a video clip of Chase I took tonight after dinner. He was in rare form, people! It was so cute and hilarious! He definitely loves to hear himself "talk!" Just make sure your volume is turned down... he's loud!