Oh my goodness, friends. How is it possible I overlooked the trauma that is unpacking & settling in after a move? I was focused on packing -- me, plus four peoples' stuff and a zillion boxes. I got through it and got 'er done.

The moving was next -- not too shabby when you hire 3 guys and 2 trucks to make it happen, and happen it did! Only 5 hours and (almost) everything we owned got from Point A to Point B. Nice.

But this unpacking and settling in madness? Why didn't anybody warn me? I thought I needed the time off from work for the packing and the actual moving, notsomuch the endless unpacking and billion projects that have consumed my every waking (and some occasional slumbering) moment. And the sad part is my incredibly awesome backsplash isn't even a project that's anywhere near the vicinity of my "to do list." ((sad face))

It doesn't help that we waited until after we were moved in to list our old house for sale. Don't get me wrong -- I'm super glad we did because I wasn't too keen on random people showing up during the middle of the day, interrupting my routine with the kids, not to mention what would have been feeble attempts at keeping the house clean 100% of the time with two small kids. But it means that not only the unpacking and new home tasks are on the docket, so is old house room & closet painting, drywall patching, hardcore cleaning, yard beautifying, carpet replacing, overall preparing to get that house in sellable condition.

And as you might imagine, there's only so much I can do at the old house with two littles in tow. Which means the brunt of that mess has fallen on hubs. So he's there, working himself crazy, while I'm here with the kids. Trying to unpack. Installing ceiling fans and pendant lights and drawer pulls. Putting bar stools together. Attempting to make this house our home.

And it's been stressful, to say the least.

Of course I'd be remiss if I didn't mention the lovely attitude that has reared it's ugly head, compliments of my soon-to-be 5 year old. Not once, but twice I enjoyed hearing her tell me she doesn't like her new house. And why is that exactly? It's no fun.

Really. The sad thing is, I get that. I know how she feels. Daddy's gone and mommy's working feverishly to get 1,103 things off the list. There's no fun in that if you're a kid. One whose mommy has zero patience and an unfortunately misguided temper in the midst of all this chaos.

The good thing is this is all just temporary. We meet with the realtor next Wednesday to list the house, so it has to be ready by then. After that, we'll just be in serious prayer for a quick sell so we're not sitting on two house payments for too terribly long. The bad thing is there'll be a big push to get everything done over there by Wednesday. Add in the fact that I work 9 hours on Saturday and 7 hours on Sunday, and hubs' time to work on the other house sans-kids is diminished considerably.

I must, however, give a major shout out to my mom who has been a HUGE help in getting things ready at the old house. She's been helping with painting and cleaning, which has been an unbelievable relief to both hubs and I. THANKS, MO!!! :)

Anywho, next week should be interesting since LO is on spring break, which means -- well, you parents out there know what that means. The good thing is we're making progress on both houses and eventually we'll be done with our seemingly never-ending project lists so we can get on with just enjoying our new, wonderful home!

And of course I'll leave you with some cute pics of the kids from today's various antics:

First up, LO's K4 class Easter egg hunt. Do you see the little glimpse of sibling love in this one? Say it with me: "awwwwww!" 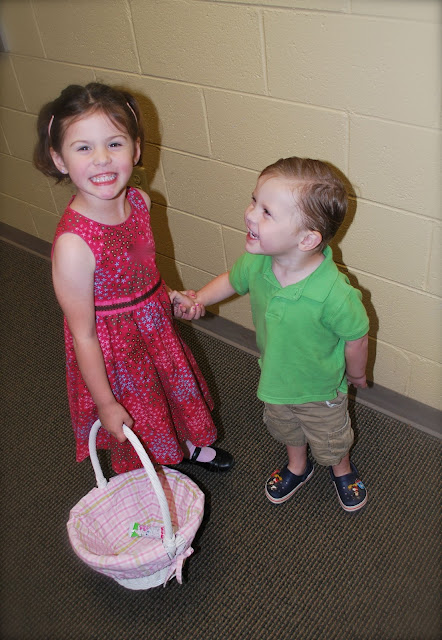 An action shot of my girl. She's allowed to gather 12 eggs and by golly, she will be the first one to find her 12! 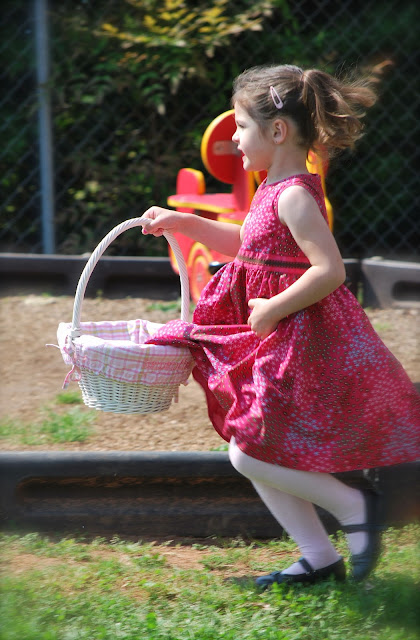 Meanwhile, Chase hung out on the slide... Such a big, handsome boy I have! 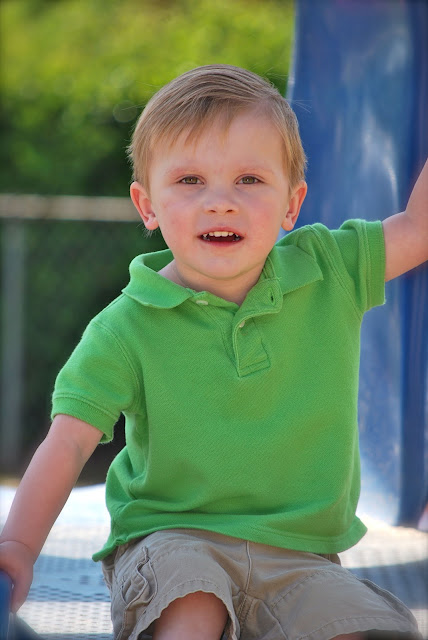 This morning while I was getting ready for LO's egg hunt, Chase came into our bathroom sporting LO's pink slippers... on the wrong feet. I don't know about you, but I think he totally pulls this look off! 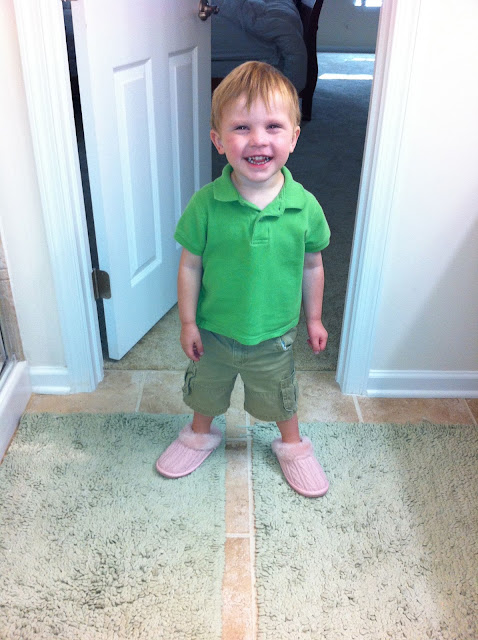 And last but not least, a once-in-a-lifetime opportunity to look inside my head and see a glimpse of an actual dream I have -- often. But wait! It's not a glimpse at a dream! It's reality!! And it happened in my very home earlier this very day! LO literally vacuumed our entire living room while Chase "swept" the kitchen floor! You can't see me in the pic, but I'm sitting at the bar with my feet propped up whilst enjoying a handful of Godiva truffles and a cosmo. Haha!!! 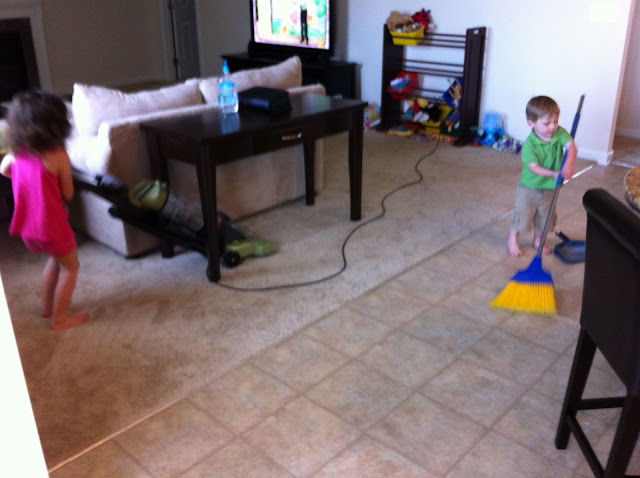