These days, it doesn't take much to make hubs and I happy. We know we have a whirlwind of activity that is just over the horizon, so honestly, we find joy in the simplest of things. Case in point: hubs replaced the headlights on our Jeep. And we are both in love with the results. Isn't that crazy? It seems so insignificant, but to us, it made such a world of difference to our beloved vehicle. I still don't understand why they got so weird and foggy-looking, and even though hubs attempted to "fix" them (it didn't work), purchasing new ones seemed to do the trick.

Earlier this summer, the engine blew at just over 100,000 miles. This was not expected and resulted in dropping about $5,200 on a new one. We've had both front window regulators die on us, which basically means the windows would go down, but not up. So hubs replaced them. Let's see... I think there's been a tire purchase, a brake job and something relating to the transmission over the past year or so, too. So basically, we've more or less "purchased" a "new" car, which we plan to keep for all eternity!

So here's a visual of hubs latest project. And if you see him, ask him about how much he saved on these bad boys! The genuine Jeep headlights would've been over $300 -- he got these from an after market retailer on eBay for less than $100! Woot! 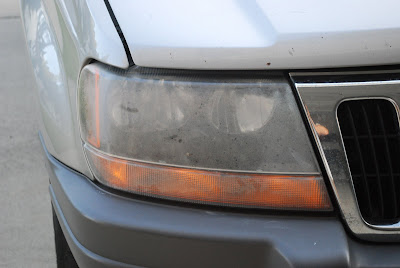 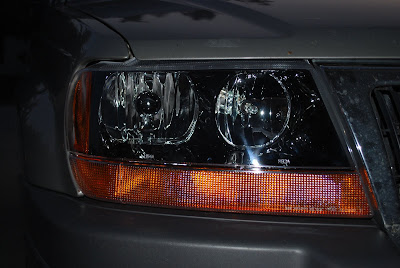