Well, it was time for another round of baby food. I started Chase on green beans back on Sunday, April 25th. You know how you're supposed to wait 3-4 days before starting another food to be sure there's no allergy, right? Well, day 4 would've been the day we left for Cincinnati (family vacation!) and I was not about to start a new food while on the road away from home. SO... the poor guy was left with green beans for an entire week! So Monday I went to the store and decided it was sweet potato time. Now, you remember this post where 1 pound of green beans resulted in a HUGE kitchen disaster and a measly 12 cubes of baby food? Well, that was not going to happen to me again, no siree bob! So, without thinking (that's just how I live my life), I bought 8 sweet potatoes. 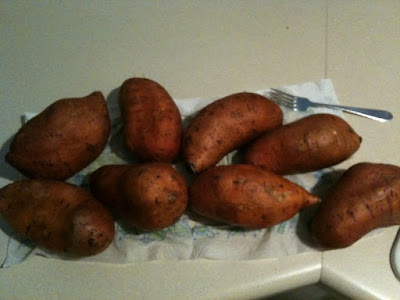 I read that the best way to cook them was baking them in the oven, so I cleaned them really good, poked 'em with a fork, wrapped 'em in foil and baked 'em for close to 2 hours. They were all kinds of soft and mushy when I took them out of the oven -- just what I wanted! I let them cool for a bit then got to work.

And work I did! Ohmygoodness! I had NO IDEA how much potato I'd be working with. It was insane. Every time hubs walked by the kitchen, I'd hear him mutter, "Man, that's a lot of sweet potatoes!" As if I didn't already know. Men.

So I'm working away with my blender, trying to show these sweet potatoes who's in charge, and my blender... well, it died. The motor started crying out for help, but when I wouldn't address it, it started smelling like burnt somethin'-or-other. Eeew. I gave up on my blender and borrowed my sister's (she conveniently lives down the street from us).

So two blenders later, I finally was able to finish up this mess of sweet potatoes. See how much fun I had? See how it resulted in the same kitchen disaster as the green beans? This time with two blenders instead of one blender and one massive food processor. 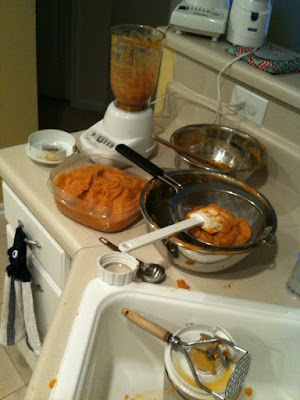 See that square container in the middle of the chaos? Ya, that'd be my NINE CUP tupperware container. Yes, NINE cup. I filled it to the top, to the point that the sweet potatoes squished up against the lid when I attempted to close it. Wow.

I've only got 2 covered ice cube trays, so it's been a continual process of taking the baby food from the frige, filling up the two trays, freezing them, then starting over again. Three days and FOUR trays of sweet potato cubes later, I still have over half a container left to go: 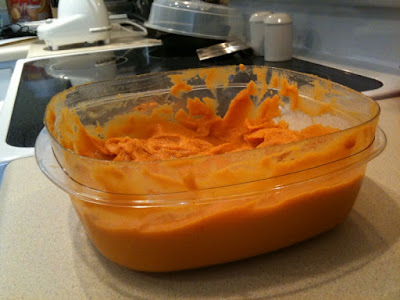 On a related note, yesterday I was at Costco buying formula (I've officially quit nursing... more on that later) and decided to scope out their selection of small appliances. I found (what I hope to be) the mother-load! It's a Cuisinart combination blender AND food processor. The food processor holds 2.5 cups so it's big enough to handle a lot of food but not so big that the food just sits at the bottom under the blade. And the blender is a lovely, heavy glass container (mine was cheapy plastic, not to mention about 10 years old) and the base/motor on this thing looks massive! My favorite thing is that it's shiny. It doesn't take much for me, people. 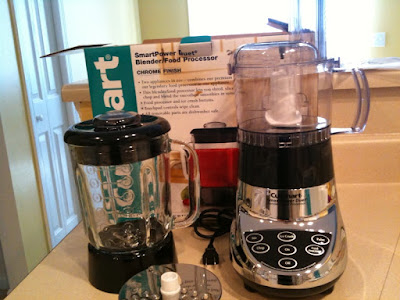 SO... while my introduction to making my own baby food has been somewhat overwhelming and it's clear I have a lot to learn in order to get into a good groove (buying and making the "right" amount of fresh veggies & fruits, etc.), looking at this face is all the encouragement I need to keep doing what I'm doing: 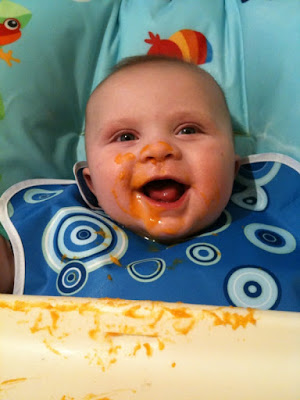