Tuesday was a VERY big day for me. For one thing, it was my very first time visiting this wonderful establishment: 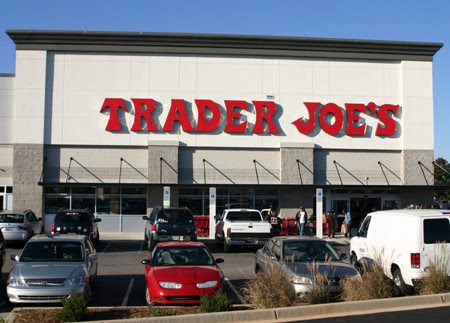 I was so excited to visit TJ's for the first time! I have to say the store was smaller than I had expected it to be, but it was lined with a TON of goodies! There were so many healthy, organic, preservative-free and whole foods available in this place and the prices were way better than I had expected. I only picked up a few items on my first go 'round, now knowing that it'll take me months to try all of the different TJ's products. I can say that I am in LOVE with their organic strawberry preserves, organic corn chips and organic tomatillo & roasted yellow chili salsa. :)

So the other thing that happened that made Tuesday a very big day for me was my Mishap of Epic Proportions. I was standing in the parking lot, trying to get Chase out of his car seat while LO was milling about when I attempted to put my iPhone in my back pocket. It inadvertently got away from me and went flying towards the pavement. I wasn't too concerned because, honestly, I've dropped the thing a zillion times. I just always take a deep breath and say a little prayer before picking it up. I was beyond mortified to see what I saw when I picked it up: 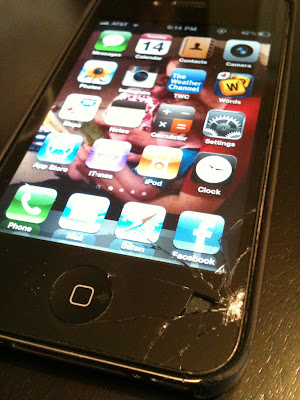 Heavens to Betsy! It was shattered in the corner and had two long cracks running across the screen. I didn't have time to deal with it at the moment; I just shoved it in my pocket and moved on with my TJ's shopping excursion. Once we were inside, I called the at&t store, which happened to be located right across the street. I took another deep breath, said another quick prayer and told the guy what happened.

I was beside myself! Especially considering it had only been 10 months since my previous iPhone loss (which ended in a pure victory for me!). I couldn't believe it. Hubs wasn't gonna be too happy with me. I called him at work and explained what happened. Surprisingly, he took it very well! Yay!

So Wednesday morning, the kids and I loaded up and headed to the mall to visit our local Apple Store to see if maybe they would feel differently than at&t and perhaps let me get away with something (anything!) less than $199. A very nice young lady approached me and confirmed I had the 10:10 am appointment, and I proceeded to tell her about the mishap. She was sympathetic and most likely saw the tears welling up in my eyes as I told the story. She confirmed I had all my data backed up (which, of course, I did!) and went ahead and replaced my phone. She said they typically charge $199 (a NEW one actually runs over $500, so the $199 is actually a discount, although it certainly doesn't feel like it), but she was going to replace it for free.

A friend of mine mentioned the screen cracked on her husband's iPhone and he was given a replacement for free, but I certainly didn't believe I'd have that kind of luck! But boy was I surprised! And thankful! And grateful! And relieved!

So within hours from the Mishap of Epic Proportions, I had gone to my trusty friend, Amazon, and ordered a new case for my iPhone. It was delivered 24 hours later. Here's what's interesting to me. The kids have an iPod Touch. Before I gave it to them, I bought an Otterbox Defender case for it because, really, you can't trust young kids to take care of expensive electronics, and this mack-daddy case was sure to keep it safe from their errant drops, throws and spills. 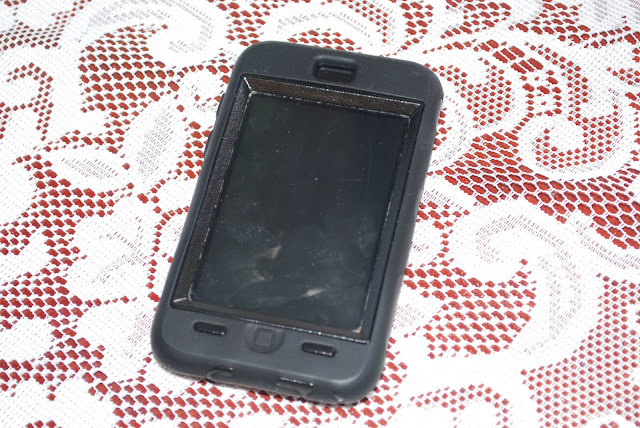 Mommy has learned a new lesson over the past 48 hours. Mommy can't be trusted to take care of expensive electronics, either. So that new case I ordered from Amazon for my iPhone 4? 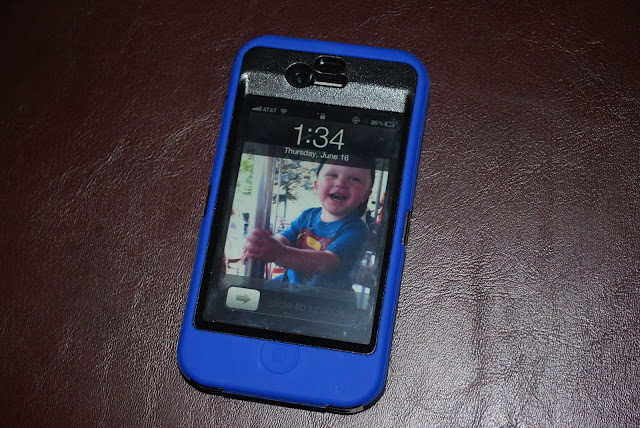 Now my sweet iPhone 4 is tucked away safely and securely within the confines of this massive yet aesthetic case.

Oh, and I should mention... that friend of mine whose husband's iPhone was replaced? Well, she has an iPhone, too. And she told me she dropped it in a parking lot, then watched TWO cars run it over. The case was banged up, but the phone? Pristine! Guess what case she had on it?

So here's hoping I can make it more than 10 months before inadvertently ruining yet another iPhone!
Posted by mom2lo at 6:00 AM