A Scheduled Visit and Procedure at MUSC

SOOOOO... if you think about us, say a little prayer for Chase this week. We'll be heading to MUSC for Chase's ENT appointment with Dr. H (the same doc who did his two bronchoscopies post-Norwood, whom we really like) for a second opinion about having tubes put in. If she agrees tubes are needed, the procedure is already on the schedule for this week.

I asked Chase how he felt about another surgery at the hospital... 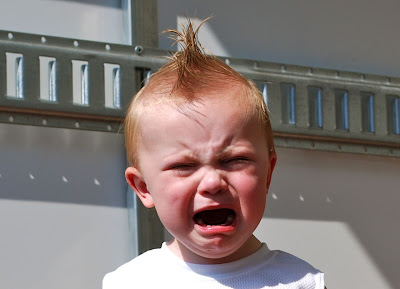 Not a fan. Who could blame him?
Here's the background story:

Chase started Speech Therapy about 2 months ago. About a month or so in, his ST asked if Chase had ever been tested for fluid in his middle ear. I thought, um, the pediatrician looks in his ears at each of his well visits, so I guess so?? But she said there's a specific test, called a tympanogram, that checks for fluid in the middle ear. She was thinking it was possible Chase had this fluid issue because typically when little ones aren't able to repeat sounds and specifically aren't saying any consonant sounds (P, B, C, etc.), a lot of times they have this fluid in the middle ear that gives them "underwater" hearing or "swimmer's ear," making it difficult to distinguish sounds. We were heading in for his 18 month check-up the following week, so I made sure to ask for the test. No surprise, our pediatrician (whom we don't really like) was unable to administer the test (she ended up having her nurse attempt it since she didn't know how to even use the thing, also to no avail) and we were sent away with a referral to a local ENT.

We went to the ENT, had the tympanogram completed, and it did in fact reveal fluid in Chase's right ear. I was quite stunned! This child has never ONCE in his life been treated for an ear infection. He's never ONCE exhibited the signs or symptoms of an ear infection. The ONLY "problem" we've noticed has been his slight speech delay. So the ENT doc comes in (for the record, he's 212 years old), checks his ears, agrees with the findings from the tympanogram, and sends us on our way with a prescription for an antibiotic and tells us to return in 2 weeks.

Fast-forward after 2 weeks of meds, we return to the ENT. Well, Dr. Dinosaur looks in both ears and says there's still fluid in both ears ((both?? I thought it was just the right one 2 weeks ago??)) and says he wants us to repeat the tympanogram. Super. After waiting with both kids for another 30 minutes, we were able to knock out the 13 second test (literally), which again only indicated fluid in his right ear only, and wait AGAIN to see the doc. He comes hobbling in and announces, "Gotta put tubes in!"

I said, "Seriously? Is that really the next step? Two weeks of antibiotics and now tubes? Is there anything else we can do??" Obviously I wasn't keen on the idea of putting Chase through another surgery with general anesthesia, no matter how "minor" or "routine" it would be.

His response: "We can do nothing. I guess that's something."

Seriously. I almost hit the floor. How cooperative and helpful, right? Geez. He started talking about getting the procedure scheduled, blah blah blah... and I interrupted him and said if anything is going to be done, it would not be done here. I turned to his nurse and told her she needed to contact Dr. H at MUSC and schedule an appointment with her for a second opinion.

So that's where we are. Of course I realize putting tubes in is a quick procedure, but it DOES require general anesthesia, which you know is not our favorite idea when it comes to our Top 10 Things to Put Chase Through (as if he hasn't already been through enough!).  We also have another consult scheduled while we're at MUSC with another department about another procedure we have been contemplating. We plan to ask lots of questions and just "wait and see" how we feel after that consultation to determine if we want to move forward with the additional procedure or not.

But for now, the plan is most likely to put tubes in our little man's ears one day this week.

So that's that. Prayers are appreciated.
Posted by mom2lo at 3:00 PM