It's That Time Again!

Guess what time is quickly approaching once again?


PROJECT PACI.
That's right! It's time to get Chase to ditch the paci! I searched my blog archives and confirmed that we got rid of LO's paci about 2 weeks before her 2nd birthday. Looks like we're a bit behind schedule with Chase... haha! As if he conforms to any kind of a schedule -- too funny! But now that he's talking more and is so independent with his big boy bed, I think we're gonna give it a go this weekend. He only uses the paci at nap time and at night, so I'm hopeful it won't be too difficult. LO was super easy when we got rid of hers with the awesome "clipping" method my friend H shared with me. Check out the flashback post from 2009 below. :)

Monday was a fun day. Hubs and I (okay, really it was all me) decided it was time to phase out the pacifier ("paci") with LO now that she'll be TWO a week from Saturday. She's only ever used it at nap time and night time, so I knew it shouldn't be too painful. However, she really does love her paci and her teddy bear when it's time for sleep. I dunno. We thought we'd give it a go anyway and see what happens.

A good friend of mine told me she had read that you can cut off the tip of the paci, causing it to lose it's suction ability. Then you just cut off a little bit every 2 or 3 days until there's not much left of it. Usually by that time the child has already given up on it.

So starting at Monday's nap time, I gave LO two pacis, both of which had been "snipped." I closed the door and before I even got to the living room, she was standing at her door, wailing. It only lasted about 12 minutes before she tired herself out and went to sleep. That night, it was pretty much the same.

She's done very well at both nap time and bed time, although the first several minutes are a struggle. Quite frankly, she's more irritated at her paci than anything else. She doesn't even bother with it, but that doesn't stop her from being mad about the situation (understandably).

We've noticed she's not sleeping as "heavy" or as much as she had been previously, but we figure that's just how it's gonna be from now on. Case in point? This morning, she woke up around 7AM (normally it's not until 8:30-ish) but I refused to get my lazy self out of bed. After all, she has an entire toy box in her room that could occupy her for hours (ha-ha). However, this morning, she apparently found a better use for her time: 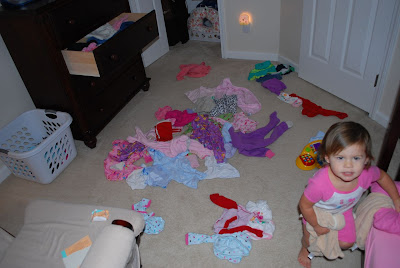 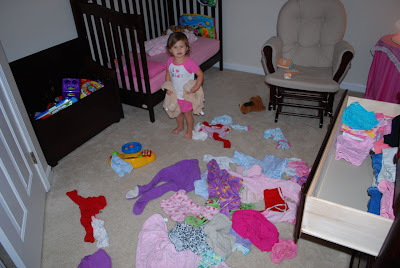 Isn't that just lovely? One entire drawer emptied, another half-emptied, clothes taken off hangers in her closet AND "Pat the Bunny?" Another casualty of her boredom. You can see it all ripped up on the glider chair.

Oh, and that toy box FULL of toys?? Not even touched.