Saturday was a busy day around here! Several Pinterest projects over the past few months have led up to a big day... transforming Chase's train room to a ((drumroll...))

It seems like just yesterday we were finally getting around to updating Chase's room from sparse nothingness to a super cute train room back in December 2012. And here we are, almost 3 years later, finally transforming his chambers into a tribute to his beloved Mario!

Clearly I will be sharing a ton of photos of the transformation below, as well as Chase's first look at the big unveiling. For a sneak peak of the inspiration behind his new room, take a look at my Pinterest board! 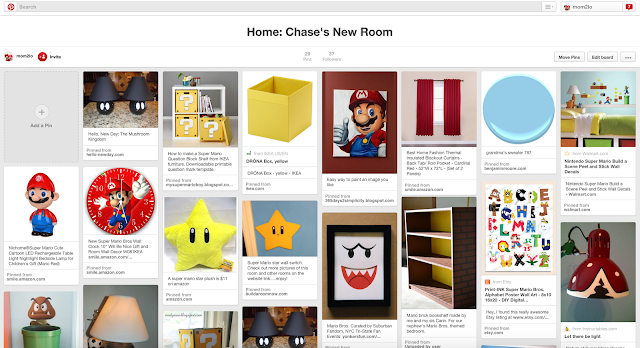 So fun, right?? I started working through the various projects about 2 months ago. With 3 kids, homeschooling, and a myriad of outside commitments, I knew I wouldn't have a ton of uninterrupted time to focus on any one thing. So I made sure to give myself plenty of time to accomplish everything I wanted to include in his new room.

I'll share the details on the individual projects and purchases at the end of this post. But first, I want to share how excited Chase was to discover this huge surprise awaiting him once he returned from a full day of fun at Mona's with his big sister and little bro.

Here's his first look at his new Super Mario room! He was SO surprised... and I think he liked it! :) 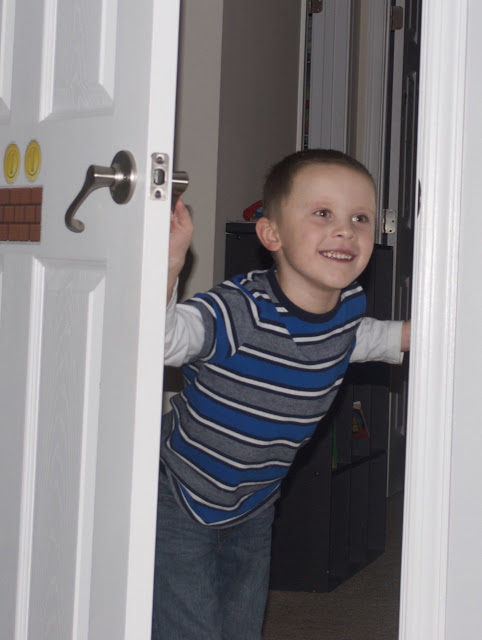 He walked all around his room, taking it all in. There was a LOT of Mario happening in this small space, and it was awesome to watch his response to each and every new thing he noticed. 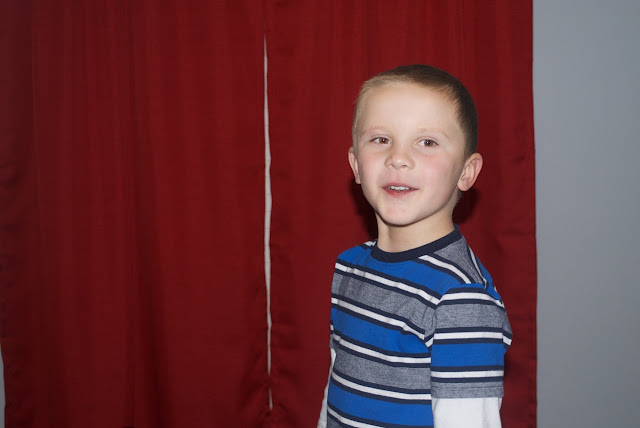 What?? That trash can looks like a pipe! And Luigi is about to go down into the pipe! Haha! 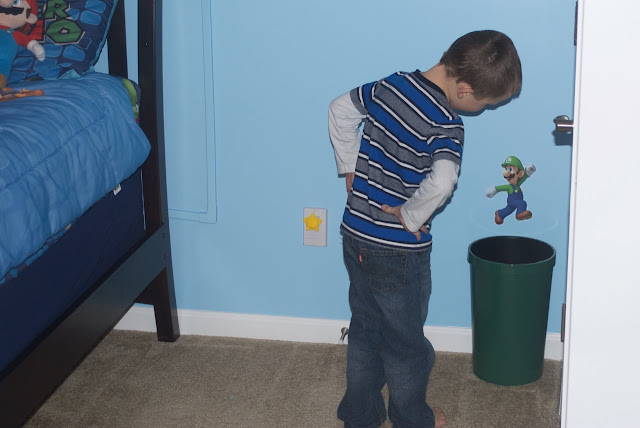 Here he is explaining an incredibly interesting Mario fact to me. 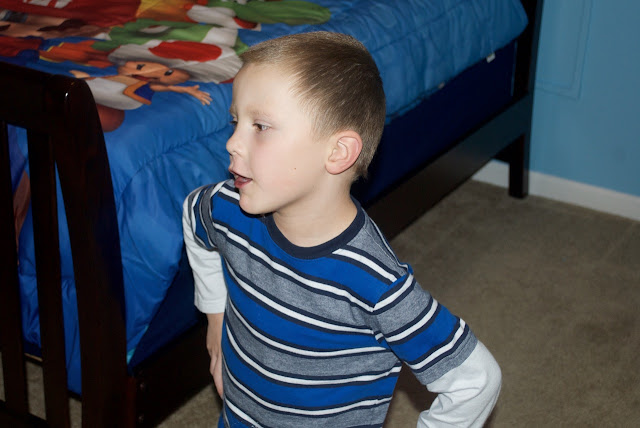 He loved the new light switch cover! He's a big fan of all things superstar! 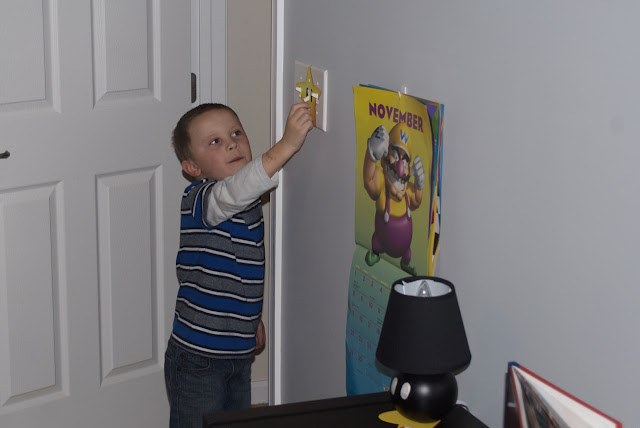 He had to identify all of the characters on his new bedding. 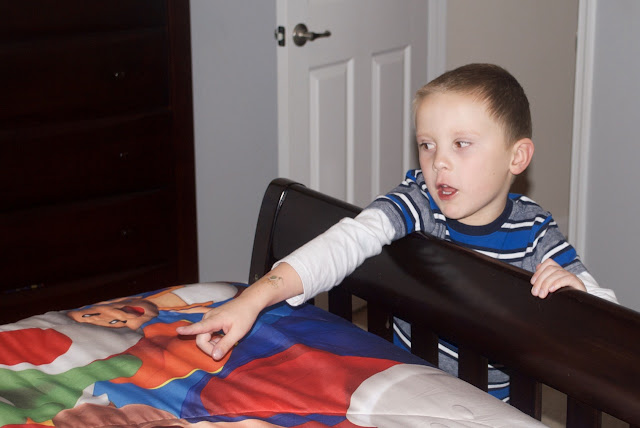 And he was so pleased that he could reach his radio/CD player now that it isn't out of reach on top of his dresser as it was previously. He explained to me exactly how to turn it on and find his favorite Christian radio station. 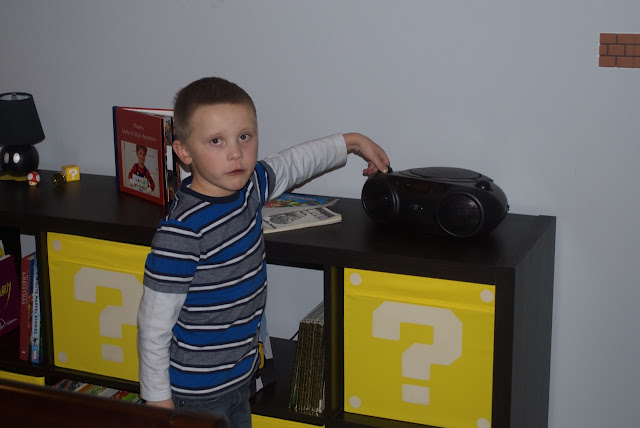 Wow! His books were so nicely organized and categorized. Obviously mommy was here! LOL! 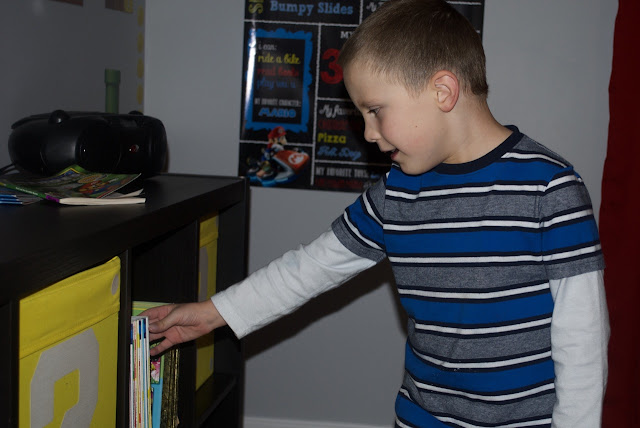 He thought the new Question Block bins were sooooo cool! Plenty of storage space for his favorite toys! 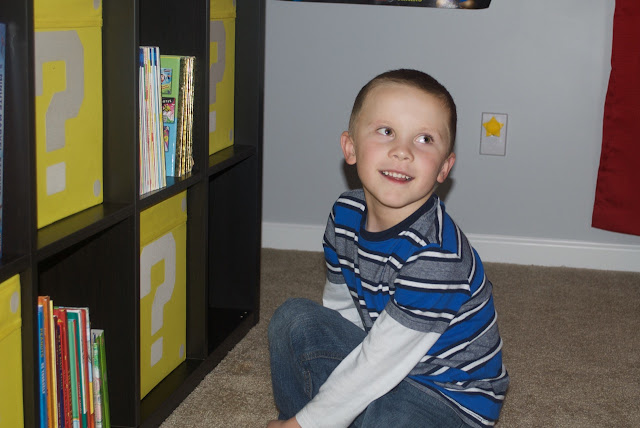 It didn't take long for him to dive into his new Super Mario Bros. bed! It was just amazing to see him so happy! His response was so worth the time and effort put into this transformation. He is so incredible! I just love him SO MUCH!!! 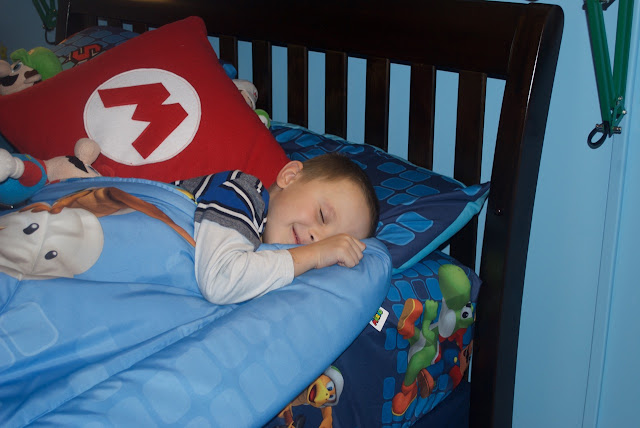 I have to share this next photo because it was stinkin' hilarious when I first saw it as I looked through all of the pictures I had taken of the big reveal. This was LO's reaction when she first saw Chase's new room. You could say she was pretty surprised, too! Bwahahahahaha! 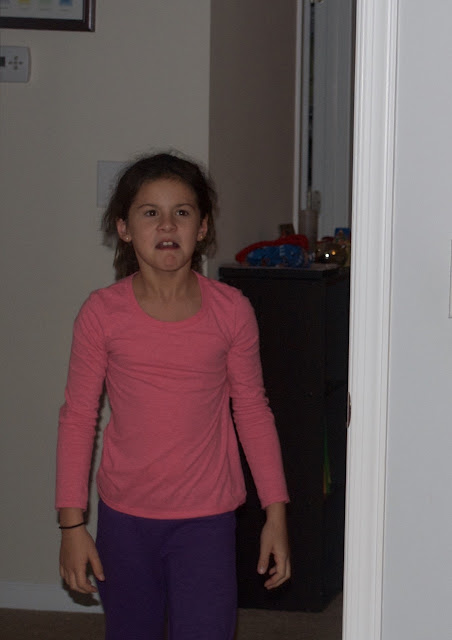 And here she was just seconds later. She really loved it and was so happy for Chase! 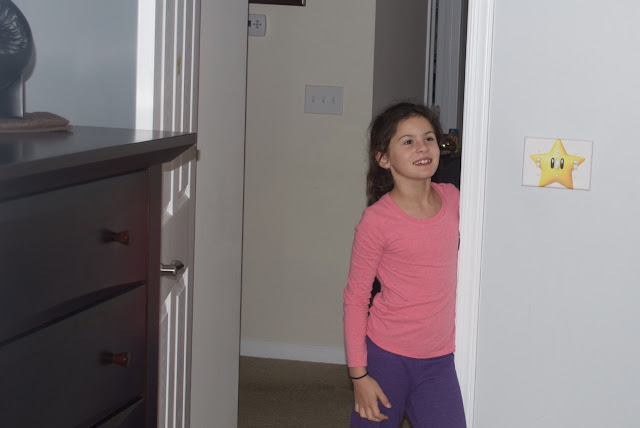 Awesomesauce, right?! So are you ready to take a look at the exciting details? So many fun projects and purchases to bring it all together. Let's take a look! Oh, and links to the sources of my inspiration are in {brackets}, while links to the products I purchased are not.

To begin, we needed a Super Mario themed bed (duh) as the focal point of the room. I picked up this Super Mario Sheet Set and made the red "M" throw pillow, then added Chase's Super Mario stuffed friends to complete the look. We painted the accent wall behind his bed a shade of blue similar to the sky from Super Mario Bros. called Grandma's Sweater by Benjamin Moore. Then I added these vinyl decals from eBay to create a fun mural above his bed. 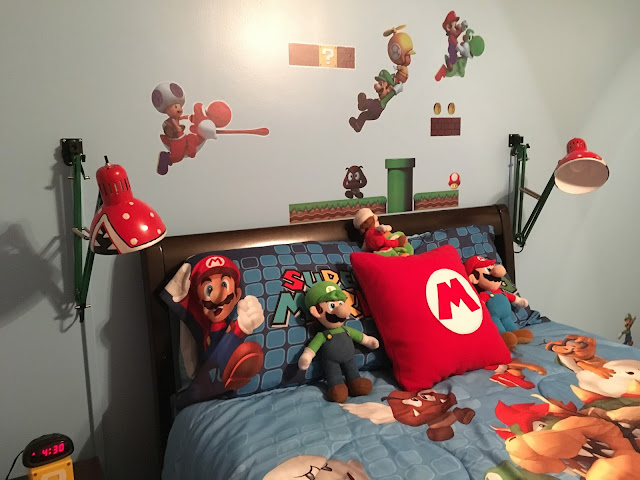 Next up, I picked up a KALLAX shelving unit from IKEA along with four DRÖNA storage bins in yellow to create these adorable {Question Block Bins}. NOTE: I used no-sew iron-on adhesive to attach the fabric question marks and circles to the bins rather than the process used in the inspiration post. 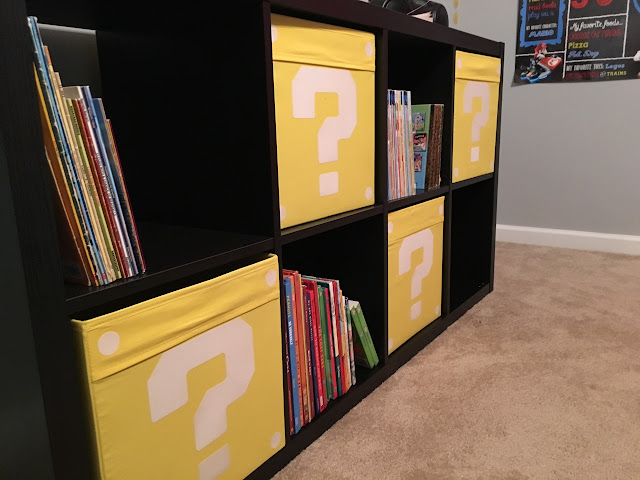 Seriously. This is the cutest. thing. ever. amiright?? This little {Bob-omb Lamp} is one of my most favorite little projects in the room! I purchased this adorable mini ceramic globe lamp, painted the eyes and cut out the feet from a piece of yellow card stock. It was one of the easiest and quickest projects! Love it. 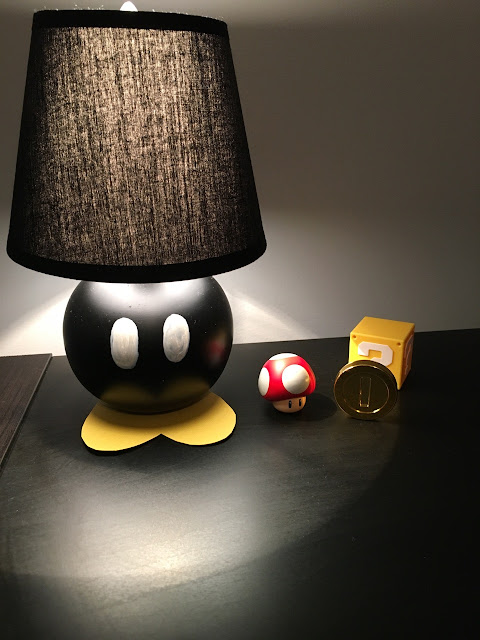 If the Bob-omb Lamp is my most fave, these {Piranha Plant Lamps} are a very close second! Two TERTIAL work lamps from IKEA, a bit of hand-painting, spray-painting, and wire-splicing, and BOOM. Adorable! These lamps are perfect for reading! 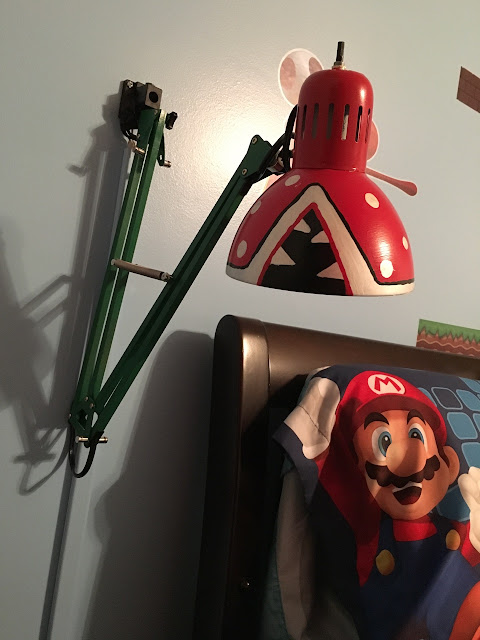 This next project was another favorite (there are so many!). I found a {Super Star Canvas Print} on zulily as my inspiration and customized my own design with the help of a talented designer friend. Because of course, my sweet little guy is the most invincible person I know! 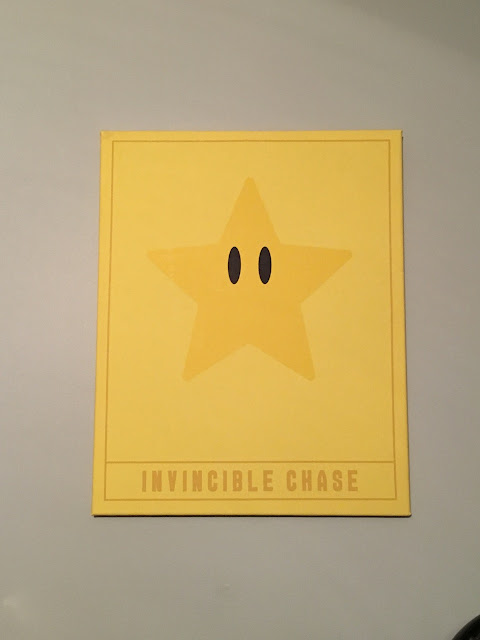 No 6-year-old's room would be complete without a nightlight, so I picked up a set of Star Shaped Night Lights and painted them yellow. They are LED lights and not very bright, so I was glad that they came as a set of two. 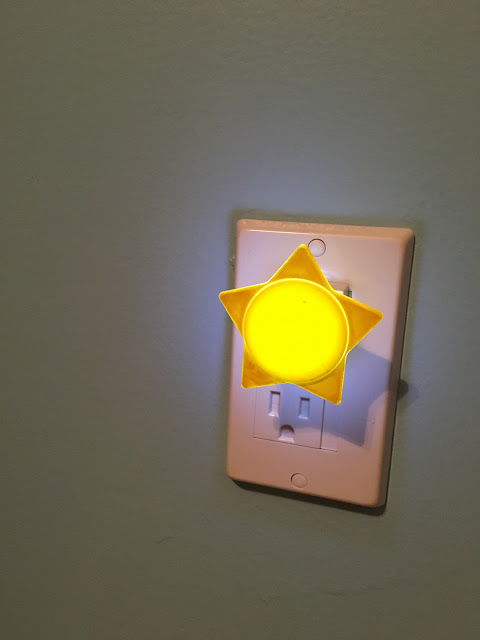 When we updated LO's room back in 2013, I covered her light switch plate with fabric and modge podged it like a madwoman. I decided to rock out the same technique for Chase's new room. If you need a tutorial for this project, I found this {Upholstered Light Switch Plate} that follows my steps pretty closely. Such a fun, easy, and cheap way to add some fun to a room! 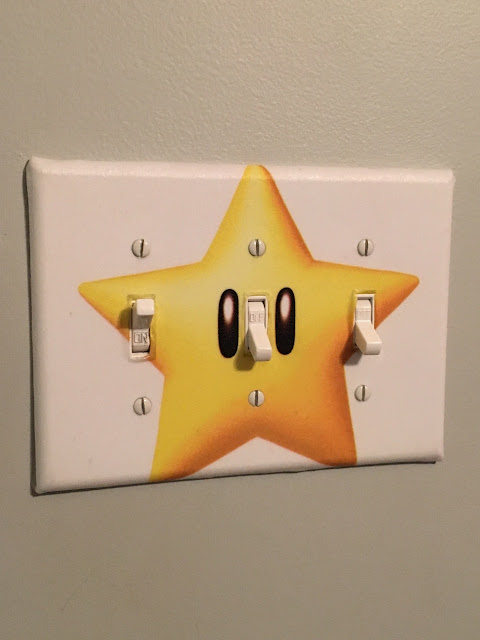 Haha! This next one was hilarious! We all worked together as a family to put a 550-piece Super Mario Bros. 2 puzzle together about a month or two ago. It had been on our dining room table for quite some time before I swiped it away into my secret work area to frame it for Chase's room! I watched this YouTube video on {How to Use Jigsaw Puzzle Glue} since I hadn't done it before, and it was super easy! The best part was that it took forever for them to notice the puzzle was gone, and once they did, they were crazy disappointed thinking I had taken it apart and put it back in the box. All that hard work, right!? So they were both so excited to see it up on the wall! 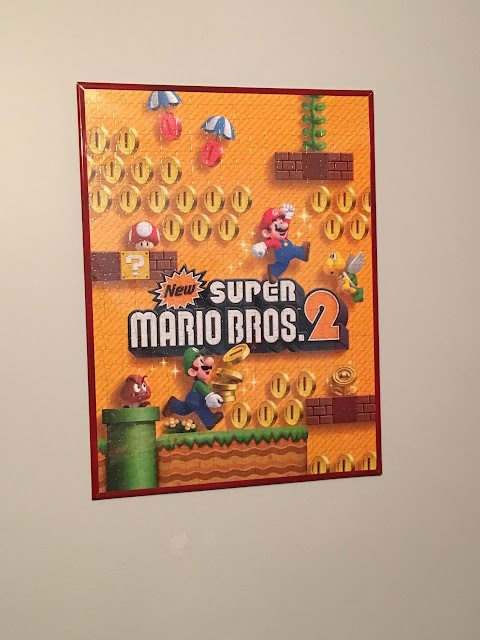 I saw this super cute {Cloud Garland} on Etsy and decided to make my own to hang up on the accent wall we had painted. I so love how cute it turned out! I can see this sort of thing as a super fun party decoration (because, let's face it, we'll probably see another Super Mario birthday party or two in our little guy's future).  :) 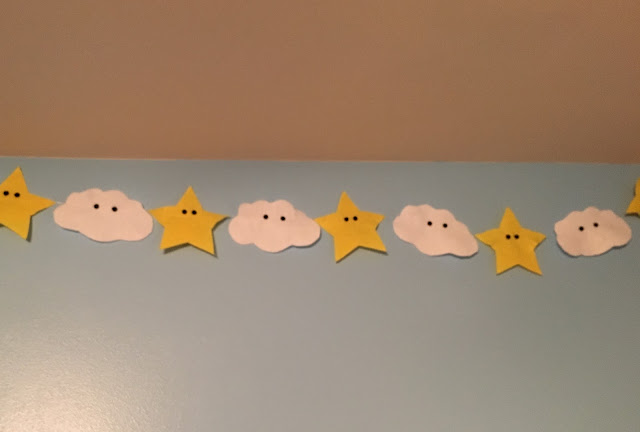 Oh! Oh! Oh! This next little project was super simple AND super cheap... my favorite! I purchased two of these Question Blocks candy tins from Amazon, had hubs drill holes in the sides of them, and put them onto the ends of Chase's existing curtain rod to create this fun {Question Block Curtain Rod}. Bonus? The kids loved the coin-shaped candies from inside the tins! 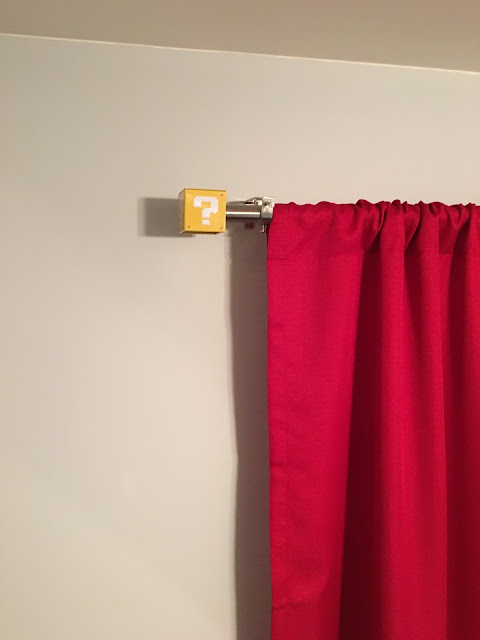 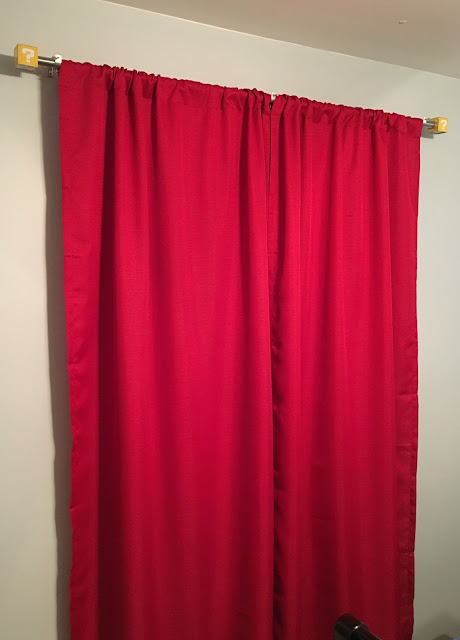 I picked up another set of vinyl Super Mario Wall Decals to put on one of the walls where Chase could easily reach them and rearrange them to create his very own Super Mario adventure. 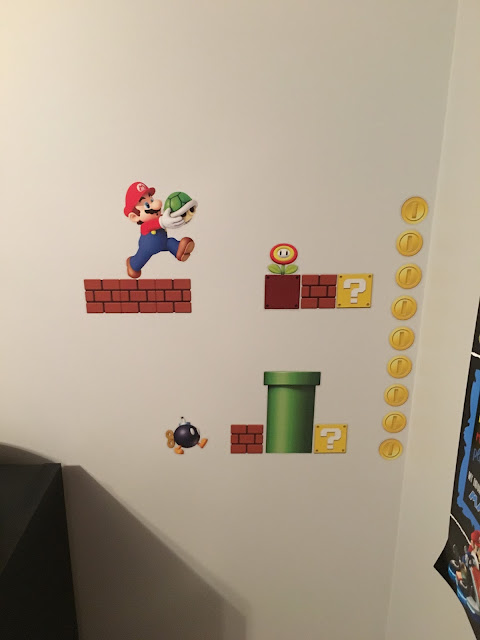 How adorable is this {Pipe Trash Can}?? Another super simple and inexpensive addition to the room. 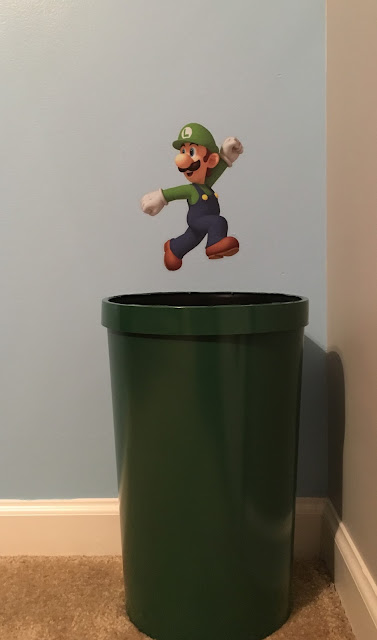 And finally, what little brother's new Super Mario room would be complete without a one-of-a-kind original artwork from big sis? Love. 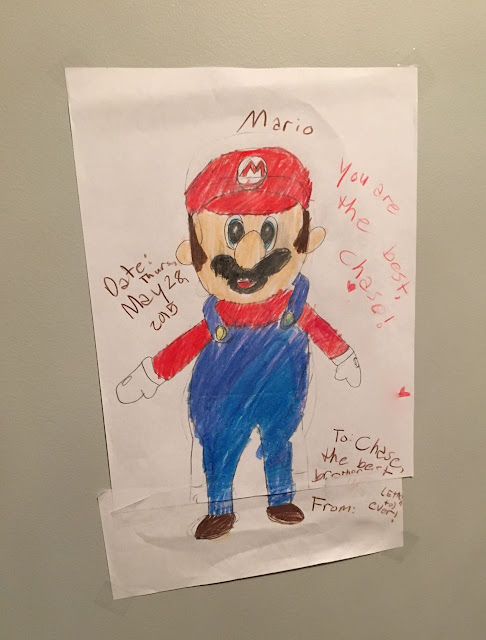 Whew! I think we have a very happy 6-year-old Super Mario super fan. Awwwwww... LOVE HIM. 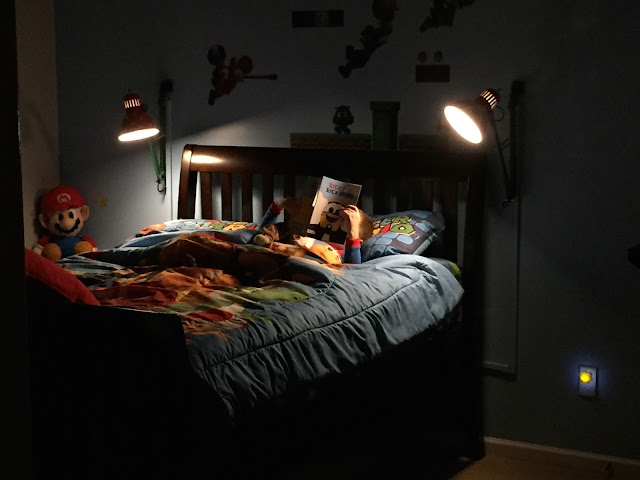 Hope you enjoyed this crazy lengthy recap of our big bedroom transformation project! And in case you observant folks are wondering where all of the adorable train decor ended up after we removed it to make room for Mario, you'll be happy to know it all found it's way down the hall to a brand new owner! More on that big reveal up next!
Posted by mom2lo at 10:26 PM