Just an FYI... ABC is running a medical documentary on Thursday nights at 10pm EST called Boston Med. It's an eight-part series inside three top hospitals -- Massachusetts General, Brigham and Women's & Children's Hospital Boston. On tonight's episode, they will be following a family that gives birth to a baby with HLHS. Here is a short synopsis from ABC's Boston Med website:

Renee Peerless has spent nearly nine months of her pregnancy alone while her husband serves with the military in Iraq. His absence is made more difficult by the knowledge that their baby in utero has a serious heart defect and will need surgery within days of being born. A story of courage and hope, viewers will recognize the universal themes of motherhood, duty and determination that summon the best from us in difficult situations. 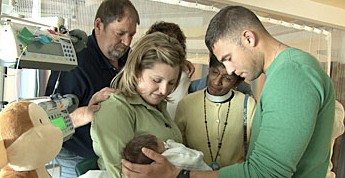 I obviously have no idea what's in store for this episode, so I can't say how much it might mirror our journey with Chase. However, I am certain it will give you at least a tiny glimpse into the world of a heart family. Do yourself a favor and tune in!
Posted by mom2lo at 6:00 AM