Praise the Lord! Chase had a cardiology appointment this morning and I'm beyond thankful to say we received a fantastic report! His o2 saturation was 92 (which is probably the highest I've seen it), with the comfort level being between 85 to low-90s. Basically we don't want to see it get much higher than that before he has his final surgery, the Fontan. His blood pressures were great, his pulses were great and his echo looked great, too! Dr. Horne did still see a trace leak with his tricuspid valve, which was basically the same as what he saw 2 months ago. He did say typically this kind of leak seems to improve after the Fontan, so that was encouraging. And I was surprised by his latest stats: 27 1/2 inches long and up to 18 lbs. 15 oz.! I was hoping he'd crossed the 18 lb. mark, but apparently he's almost to 19! Way to go, sweet boy!

If that's not a good enough indication of how well our little guy is doing, maybe this will help: our next cardiology appointment is in FOUR MONTHS!!! Yay!!!

And I couldn't get over how incredible Chase was during the entire exam. From the blood pressures to the echo, he was a total CHAMP! I will say that towards the end, he was getting a bit tired of all the hoopla and was ready to leave... 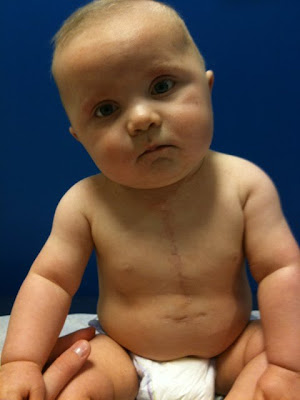 Dr. Horne did tell me something I wasn't aware of when I asked him about the prerequisites for the Fontan. Of course it's based mostly on weight, age, lung pressures and heart function, but I've always been told it would be between 2-3 years old. He said the majority of their patients are closer to 4 when they have their Fontans. Wow! I just assumed it could be between 18 months to 3 years, based on what I've heard and read on other blogs. And hubs pointed out maybe most of Dr. Horne's patients are closer to 4 because they have a hard time putting on weight. We haven't seen that to be an issue with Chase (as of yet), so perhaps he'll still fall in the 2-3 year range.

We also talked about the fact that we want to have Chase circumcised. We knew it couldn't be done at birth and it couldn't be done within a few months before or after each of his first two surgeries. Dr. Horne recommended early on that we wait until he's closer to 1 before we schedule it. Hubs and I have talked and we're leaning towards taking him back to MUSC to have the procedure completed there so we'll be close to the right people should anything unexpected happen. It seems like an easy enough thing to have done at the local children's hospital, but considering how Chase responds to anesthesia, we'd rather play it safe than sorry. So when we see his pediatrician in a few weeks, we'll ask for a referral to a pediatric urologist (I assume?) at MUSC. My poor boy!

So overall it was a wonderful appointment and was such a relief to hear that he's doing fantastic and no new issues or problems were found. Praise the Lord! We are so grateful for His hand of protection on Chase and for each new day he gives us to love on our beautiful son! Thanks to everyone for your thoughts and prayers for the appointment this morning and for your prayers for Chase's continued health.
Posted by mom2lo at 12:46 PM