Chase's 1st birthday party was so much fun! We partied and ate and celebrated and ate and opened gifts and ate some more! Can't go wrong with that, eh?

So I'm just posting a TON o' pictures on this post and providing a little commentary. The day was wonderful and emotional and I can't help but feel so very privileged to have been blessed with an entire year with my sweet boy. God is so good! 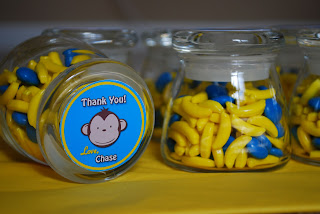 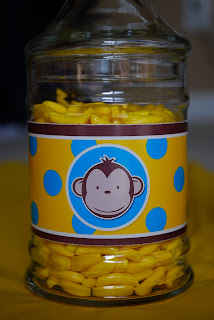 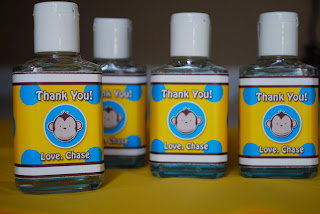 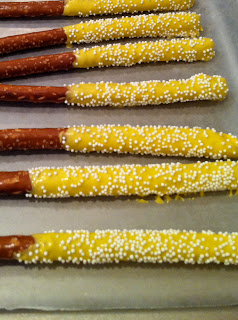 After the cake, Chase and I opened his gifts and boy did he make out awesome with all his new stuff! It's been quite a challenge to get LO to understand that these are Chase's new toys, not hers. I think she thought it was Christmas morning!

After the guests left, we put Chase and LO down for naps. Chase hardly slept for 30 minutes before he was up again, ready to party! I think he realized his only opportunity to play with all of his new toys was while LO was taking her nap... ;)

Later into the evening, we were getting ready to eat dinner so hubs grabbed Chase from the play area and brought him into the kitchen to eat. I happened to notice Chase's drool was quite pink -- very unusual and not at all expected! Upon further research, we found this: 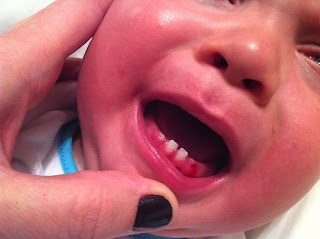 You may or may not be able to see it in the picture, but somehow the boy got a TINY little cut on his gums, well below the gum line where a new tooth was popping up. The only thing we can figure is that he somehow jabbed his gums with his fingernail, but it was so crazy because he never once cried or made any noise whatsoever that he had been hurt. It didn't seem to bother him at all, but I'll tell you the blood was POURING out of this teeny little cut and pooling between his gums and bottom lip. Of course he was swallowing all of this and I was desperate to figure out what to do. I tried using a paper towel to put pressure on it, but he got MAD! Then a washcloth with an ice cube in it... he didn't want anything to do with that, either. I decided to call our pediatrician's office to speak with the nurse on call, who suggested I mix up a slushy with lots of ice and some juice. He surprised me and ate it from a spoon for 10 minutes or so, but I still saw no decrease in the bleeding. I fed him some soft banana and a jar of baby food, got him dressed for bed and took another look. It finally started to look like the bleeding was slowing down. We went ahead and put him to bed, and checked on him about an hour or so later. He was sleeping peacefully with his paci in, and when we took it out, there was no sign of blood anywhere on his paci or in his mouth. WHEW! We were seriously worried we might have to take him to the ER on a Saturday night, which was ridiculous considering how TINY the cut was and that we knew they wouldn't really be able to do anything for him anyway. Luckily he woke up wonderfully (albeit quite late... not 'til after 10AM!) this morning and has been super-great all day, with no sign at all of his little boo-boo. What an awesome trooper!

We had a wonderful day celebrating all that Chase (and hubs and LO and I) have made it through over the past year, and look forward to celebrating many more birthdays and milestones in the years ahead! God has blessed us beyond measure with our son, and we couldn't be more grateful for His goodness and grace.

Thank you to all of our blog readers, heart families and friends who have followed our journey and prayed for us along the way. I know we would never be where we are today if it wasn't for the love and support of our friends and family, so THANK YOU!!!!!
Posted by mom2lo at 2:55 PM