Chase did super-awesome with his RSV shots on Monday. I so hate that he'll have to get one in each leg, once a month, for 6 months. But it's worth it to keep him safe and healthy!!

The poor fella also got his 2nd flu shot (booster) yesterday morning. He is such a trooper! As soon as the needle goes in, he wails (obviously). But by the time the band-aid is on and he's back in mommy's arms, he's just fine! That's my boy!

Yesterday was hubs' birthday. I cooked dinner and picked up his favorite cake: a Dairy Queen Blizzard cake. The kids and I gave him a few gifts and he opened his cards from friends/family. I really enjoyed celebrating his special day as a family in the comfort and quiet (ha!ha!) of our home. :)

Chase has his PT and OT sessions today. I love his weekly PT sessions because his therapist is simply amazing! He "performs" well for her, although he all but refuses to cooperate with me when I try the same exercises with him throughout the week. My goal since his PT/OT started was to get him mobile by his first birthday... He is mobile, with either the "army crawl" or the "butt scoot" so I guess that's progress, right? Honestly, I'm starting to regret my decision to get him mobile. I love loving on my little baby and am not at all anxious to have to chase after him rather than cuddle with him. I know with LO, hubs and I were both so excited for her to start crawling and take her first steps, but with Chase? I'm all about keeping him my "baby" for as long as possible! :)

Birthday plans are still moving right along! I've made a lot of progress on the personalized items I wanted to do, but am so irritated that I still haven't landed on a menu yet. Yes, I'm retarded. I put waaaaaaaaaaaaay too much thought into this kind of stuff. I'm pretty sure I'm driving hubs CRAZY with this aspect of Chase's party. I mean, really, I've already ordered his birthday present from us, I've already sketched out his cake design and found one of the two cake recipes I'm going to use, I've got almost all of the favor bag items ready to go, the invitations already went out, the Thank You notes were already designed, printed and shipped, his photo/video slideshow is almost complete, and yet... I still have no idea what I'll serve for food! I thought I was set with a "taco bar" type spread, but the more I thought about it, the more I decided I didn't love the idea for a first birthday. So then I've thought about the typical finger foods... sandwiches, veggie tray, meatballs, etc.... but I did that for LO's 1st and 3rd birthdays, so it feels like it's been SO overdone and since our party guests are pretty much the same each time, I figure they're sick of it. I don't want to do something heavy like lasagna since the party is during lunchtime. I don't want to do a "meal" (like baked ziti with salad, breadsticks) because I feel like a party should have a variety of food and some people may not like the meal I chose. ARGH!!! I totally realize this decision shouldn't be THIS hard, but I can't help it that I'm so crazy about little decisions like this! I also thought about getting pizza and serving it with a salad, breadsticks, a veggie tray, etc., but I can't help but feel like I'm supposed to be Betty Crocker, so who am I to "buy" food for one of my kids' parties and NOT make it all myself from scratch? This isn't supposed to be so difficult! I know I can't make everybody happy, but I want to at least strive to make the majority of them happy! There's nothing wrong with that... right? Right?? Ugh. I'll keep thinking and eventually I'll figure it all out... I hope. ;)

I couldn't post a miscellaneous update and not share pics/videos of the kiddos, so here's what Chase has been up to while I've been writing this post... 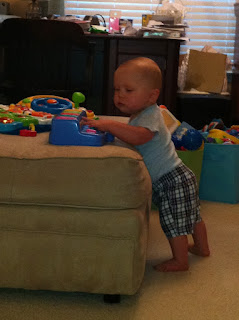 And here's what LO was up to during the "Choo Choo Soul" commercial on the Disney Channel a few minutes ago... ((I've learned that if I hold my iPhone horizontally, it takes bigger, better HD video instead of the tall, skinny video... but I keep forgetting to do that.))