I've been working on plans for Chase's first birthday party for at least 2 months now. For most of you who know me, that should come as no surprise! Since I mailed the invitations out last week, I'm so excited to share with you what I created! I wanted to do something different, but needed it to match his party theme, and wanted it to include his photo, too. No easy task, right? Well, after googling some ideas, I found one that I loved and created it for Chase's first birthday invitation. Without further ado...

His party theme is mod monkey: 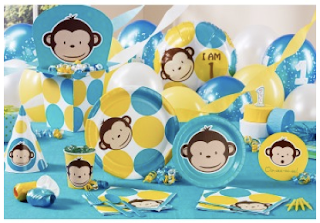 And here's the matching invite (click the photo to see a larger image!): 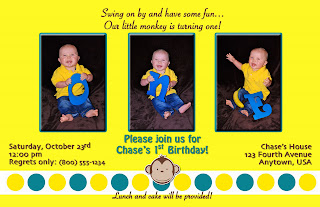 It was SO MUCH FUN shooting those pics of the little guy. He was in such a great mood and was all smiles for mommy! I had a ton of pictures to choose from and I think the final product was absolutely perfect! Yay!

While I'm on the subject of his birthday invitation, I have to share the redneck/MacGuyver solution my husband created for me so I could get perfect, even coats of spraypaint on those letters you see in the photos. It was hilarious! It involved two step-ladders, some string, a level and 5 screws... 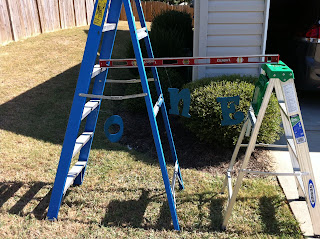 Wow, right? Seriously though... THANKS, HUBS!!!

Last week I was also finally able to order one of Chase's birthday presents: a bean bag! As you may recall, we bought LO a bean bag for her first birthday that matched her nursery decor and it has been the biggest hit over the years! She plops down in that thing several times a day and it has held up wonderfully. We thought we'd keep the tradition and find one for Chase, too! Well, it turns out the company I ordered LO's from just didn't have a pattern that I loved, so of course I had to make things difficult and order a custom one with fabric I found online. So his bedding is called Jungle Tales and is totally cute like this: 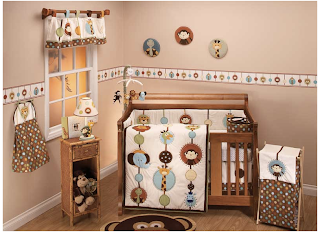 Lots of dots n' stuff. I was inspired by the dots and the chooclate-y color scheme, as well as the dots from the cribsheet. You can't see the sheet very well in this photo, so here's a close-up of: 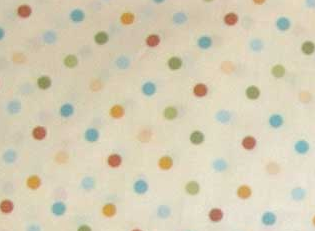 After some online fabric shopping, I decided on this fun pattern of--of course, dots!--which all happen to match the overall color scheme of his room quite well! 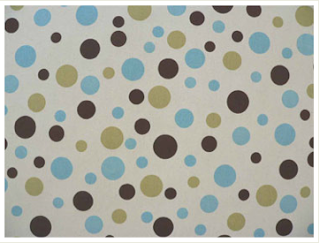 This fabric obviously doesn't incorporate all of the colors of his bedding, but the ones it does include definitely match nicely! Besides, I figure the bean bag will reside in the living room next to LO's, so it's not like I'll be comparing it side-by-side with his bedding set! Plus, I'm sure one day his bedroom will turn into the latest Disney craze (Cars, Toy Story, etc.) and it won't matter anymore, anyway! If he enjoys his bean bag even half as much as LO, it will be money well spent! So typical me, I ordered this fabric over a month ago and have been waiting anxiously to send it to the bean bag company (highly recommended, by the way--their bean bags come with a TEN YEAR warranty!!!) because they only take about TWO DAYS to turn around a custom bean bag. I finally shipped the fabric to them last week so I could cross this item off of my To Do List. Yay!

Over the weekend, I made some serious progress with some other party-related items on my list. I'm putting together what I hope will be the cutest little treat bags for our party guests, complete with some very relevant and personalized items from Chase! So cute!!! I've also got to fine-tune the details surrounding the party food and also sketch out the cake design in my head so I can put some serious effort into creating a masterpiece! Haha... I know it'll NEVER look as good as the one I have in my head, but I've been putting a LOT of work into finding the perfect cake recipes! I have a wonderful chocolate recipe, but am still completely without a white cake recipe that (A) doesn't come from a box and/or (B) doesn't taste like cornbread (yes, for some reason all of my "from scratch" white cake recipes come out tasting like cornbread--gag!). So, I'll figure that out soon. I also worked with some fondant last week and decided that, as cute as it looks on the cake, I absolutely hate it!!! It was super-easy to work with and definitely did give me the smooth finish I wanted for the cake, but it tasted awful (even though I made it myself from a very trusted recipe) and is all but impossible to eat! I'll stick with a super-duper vat o' buttercream for these cakes!

So, that's a little update on some of the birthday stuff I've been working on for the past few weeks. There is much left to be done, so I'd better get my little guy out of bed and get this day moving! My poor fella has his first RSV shotS this morning at 10:30 AM, so hopefully he'll get through them okay. Last year he only had to have ONE shot per month, but since he's bigger (weigh-wise) this year, he'll get one shot in EACH leg, once per month, from October through March. My poor guy!!! But I sincerely believe it's worth it when you consider the alternative (a respiratory virus like RSV would be devastating to someone with a special heart like Chase!).
Posted by mom2lo at 8:43 AM