The other night I was helping LO get ready for bed (we have a standard nightly routine with BOTH kids, which I highly recommend), and it was time to choose which story she wanted me to read to her. To my surprise, she chose The Lion King. 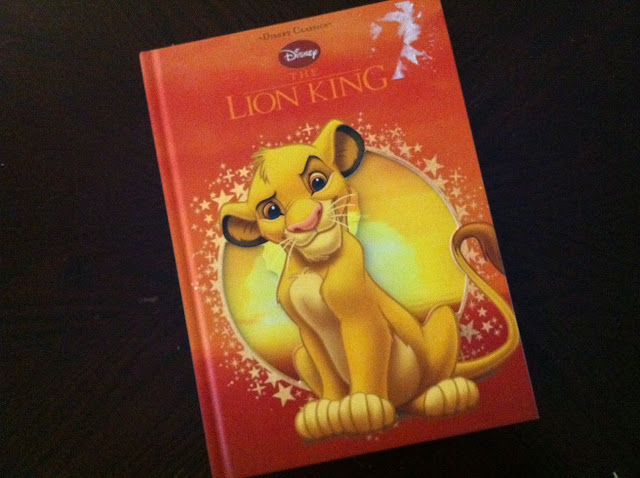 I was surprised since she hadn't been interested in reading this story yet (she got it last month for Christmas) and wasn't sure what exactly about it had piqued her interest. On a side note, she hasn't seen the movie yet, either... I'm concerned that it'd be too dark or scary for her.

So I tucked her into her bed and snuggled up next to her and began reading. She followed along nicely and was very engaged in the story. She would occasionally interrupt me to ask, "Who's that?" since there were so many characters in the story, most with unusual names.

Fast-forward to when Simba returns to fight his evil Uncle Scar and take back his rightful place as King of Pride Rock. There is an illustration where Simba is fighting one of the hyenas. LO interrupts me to point something out that I didn't even notice. I do believe the child found a "typo" in the illustration -- obviously not in words but in the picture -- I'm not sure what you'd call it. A misillustration? Anywho, she kept asking me about it and I kept looking, trying to figure out what she was referring to.

Here, I'll let you take a look. Do you see what my 3-1/2 year old saw? Something is wrong with the picture below: 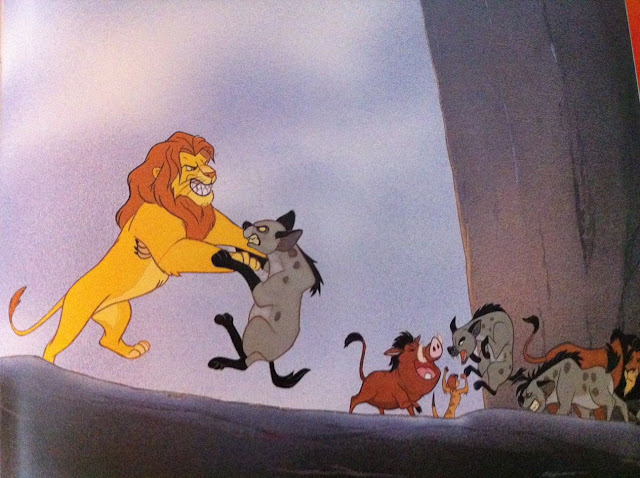 I'll give you a hint... It's a little somethin' extra on ol' Simba over there.

Go look again. You know you see it!

Okay, I'll give show you where it is:

What IS that? Honestly, it looks to be a lion's paw, complete with claws and everything. But it can't be one of Simba's paws, since they are both on the hyena. I thought maybe it was just some fur or something? But I see claws.

So help me, is this a drawing typo or what? I still can't get over the fact that my little daughter was observant enough to notice such a little thing.
Posted by mom2lo at 6:00 AM