Day 3 is almost complete, and it was another success! Yay!

I tried to get the kids to jump outside of their comfort zone this morning. I made them oatmeal, which they've never had before ((shame)). I eat oatmeal often, but more times than not it's the little flavored oatmeal packet you just add water (or milk) to. I decided we'd all try a new healthy breakfast option.

It didn't help that as I headed to the kitchen to start breakfast, Chase was shouting, "Pancakes!" while LO chimed in with, "Pop-Tarts!" Grrrr.

So I made some oatmeal using this recipe from 100 Days of Real Food. I've always used water with my oatmeal, but her recipe called for milk instead. The oatmeal was flavored with a dash of honey, a sprinkle of cinnamon and a splash of vanilla. ((Note: When I made myself real oatmeal a week or so ago, I used water but topped it with about 1/4 cup of brown sugar! And lots of raisins! It was amazing to eliminate the sugar and find out how sweet it still tasted with just a little honey, cinnamon and vanilla.))

Anywho, I served the kids (and I) oatmeal with a side of toppings for them to choose from: raisins, bananas and strawberries. I chose raisins and bananas: 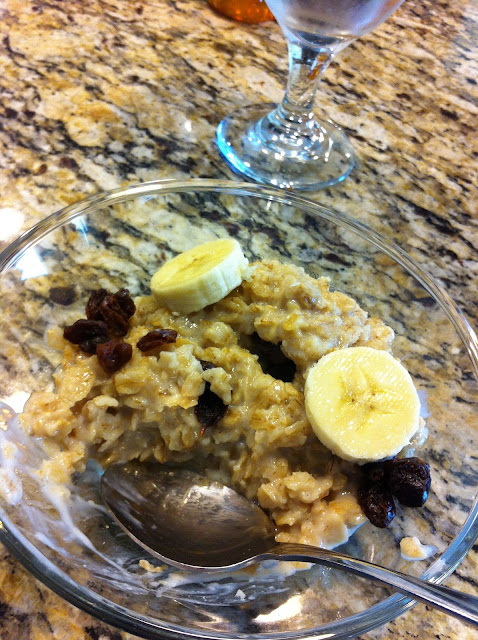 And the toppings! I thought (hoped, prayed) that by letting them choose their own toppings and "helping" make their breakfast that they'd have more interest in this oatmeal stuff. 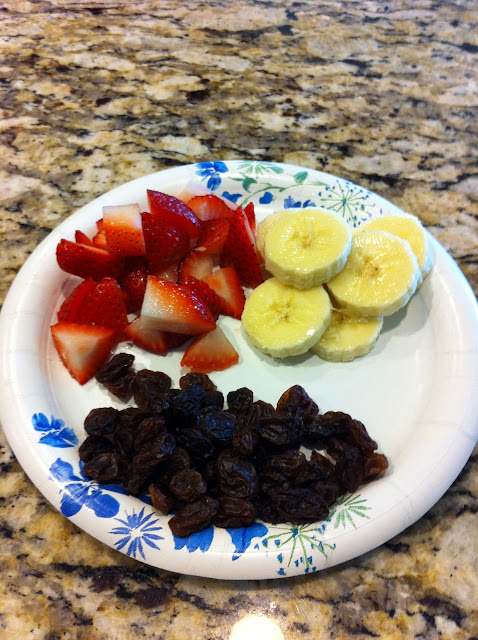 LO decided on raisins. I think we got off to a great start! She didn't do her typical complaining about how she "doesn't like it" before even trying it. I was keeping my fingers crossed... 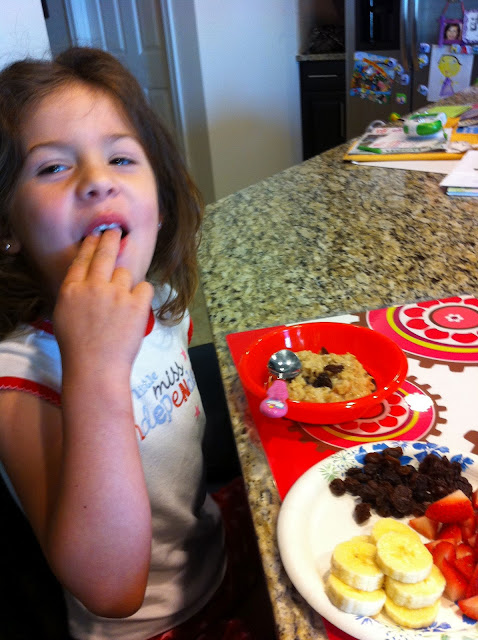 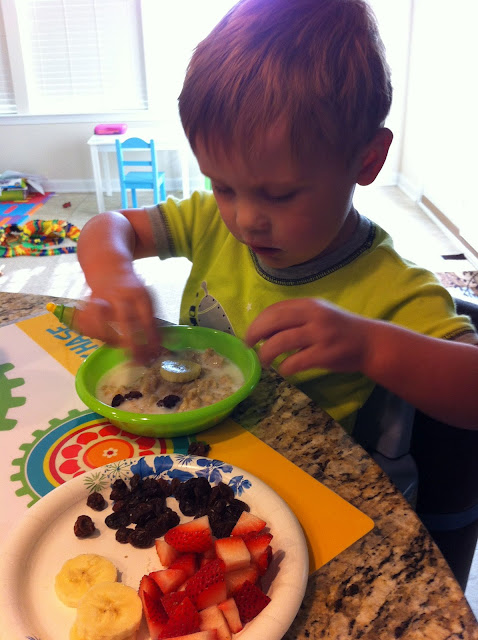 Chase took his usual cereal approach and dumped a bunch of milk into his bowl and then tried to drink it... only he wasn't a fan. "No like it," said Chase, over and over again. LO wasn't a big fan, either. Long story short, they ate some of the banana, strawberries and raisins, but left the oatmeal.

But it's okay! I was super proud of both of them for trying it without any complaining. I'll definitely try oatmeal with them again, and hope for a different response. ;)

Lunch was pretty similar to yesterday, and no pics because we enjoyed our lunch at the pool today! PB&J's, cheese cubes, grapes and apples, along with a fruit strip and some whole wheat pretzels from Trader Joe's. No surprise but I ate leftovers from Tuesday for lunch... again. ;)

Dinner was super simple and quite tasty! I did break my "no processed foods" rule by serving whole wheat pasta, but at least it was whole wheat, right?

So I took one chicken breast (it was all I had defrosted and ready to go -- I would typically use two for a meal like this), cut it into bite-sized pieces, sautéed it in olive oil with some garlic, then added some fresh sliced mushrooms. Then I deglazed the pan with some white wine, reduced it slightly, then added a can of diced tomatoes and a few fresh cherry tomatoes, cut in half. Then I let it it simmer, covered, for about 10 minutes while I waited on the pasta to finish. The kids also had applesauce with their dinner. 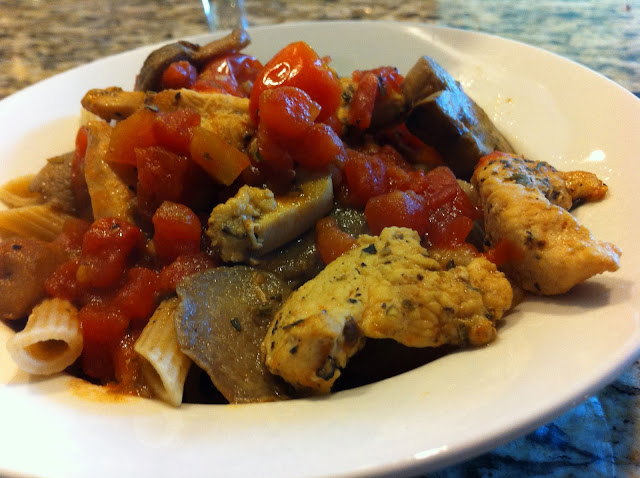 I was sorry to see the kids weren't big fans of my dinner. LO ate up her chicken without any problem, but needed some serious convincing to eat her pasta (she's not a big fan of the regular stuff in general, much less whole wheat).

Today's snacks were a bit of a win-lose. I totally won when LO woke up from her nap, asked for a snack, and proceeded to suggest we share a banana and some strawberries. LOVE! The loss came when I sort of caved to Chase and let him have some cheese-filled Ritz Bits crackers. After dinner we enjoyed some popcorn while playing outside, uh, apparently... um, in our pajamas. Don't be a hater! Super Mom over here!! 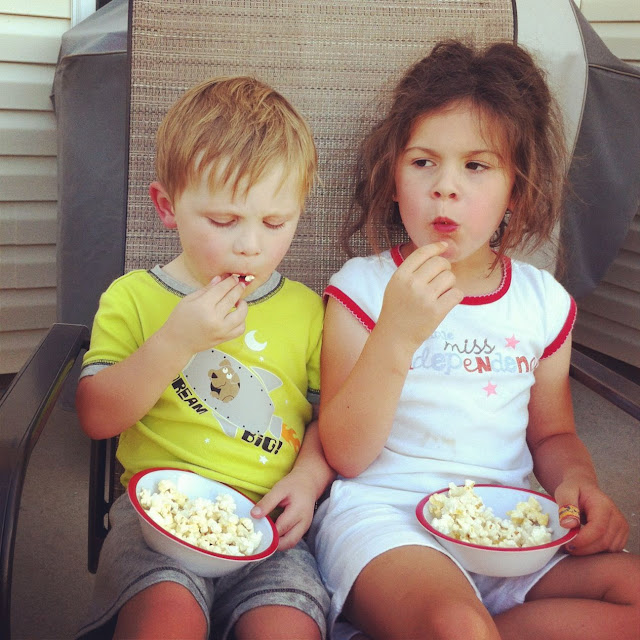 This day was truly another huge success in my book. I measure success in the fact that I avoided processed foods for myself and my family, and that I'm already feeling So. Much. Better. than I was feeling when eating mostly sweets and highly-processed foods. :)
Posted by mom2lo at 10:20 PM