I had the hardest time figuring out what to do with the kids today! It's supposed to be crazy hot, so we ended up spending the whole day indoors. Boo. But we did break out of this house this afternoon to hit the grocery store, and that was fun something. I had a proud mommy moment when we were in the baking aisle (selecting a white whole wheat flour -- not ingredients for "those" kind of baked goods... sorry to my local readers). LO was reading the episode descriptions from the back of a Dora DVD to Chase, and a random older lady (maybe 60ish?) stopped in awe and asked if she was really reading that?! I said yes, and she was absolutely amazed. She didn't even ask how old she was or if she was in school yet, but walked away chatting to her adult son/friend how she couldn't believe that little girl was actually reading that! I'm so proud of my little avid reader 4-year-old.

Anywho, here's where I'm keeping it real for myself (and those of you who care to follow along):


We had the classic (turkey) bacon and eggs this morning, with a side of fruit. I was sort of lenient with the kids and once they finished their healthy breakfast, I let them enjoy a small leftover pancake (Chase) and a Pop-Tart (LO & Chase). Seriously, it was hard not to allow it considering when I woke up this morning, Chase was standing next to my bed quietly whispering, "Pancake!" as his eyes lit up in excitement. I figure the goal right now is to incorporate more whole foods into our diets, and while I'm trying to stick to 100% whole foods for myself, I think it's okay for the kids to have an occasional splurge on something they were used to eating almost daily up until this week! 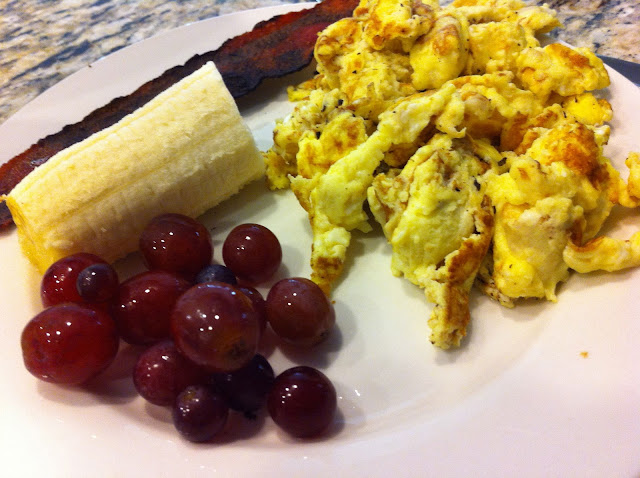 
Our morning snack was a huge success. The kids had been asking for fruit snacks but I was able to redirect them with a healthier alternative. They had cheese & cracker stackers and grapes with -- get this -- WATER. My kids don't do water ((shame)), so this was a Big Deal for us! 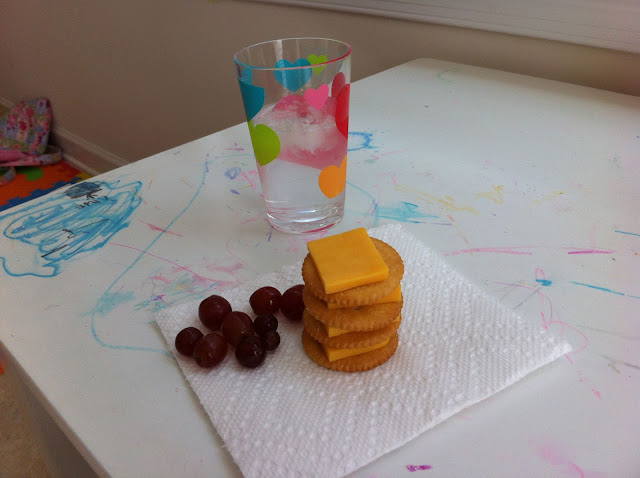 I asked the kids what they thought of their snack. They were both all smiles!!! 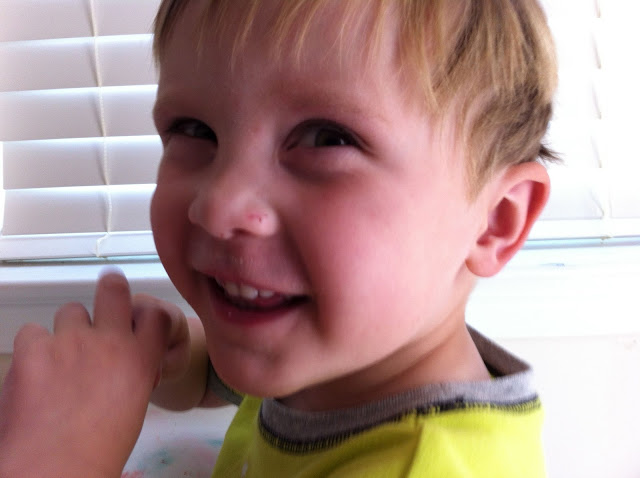 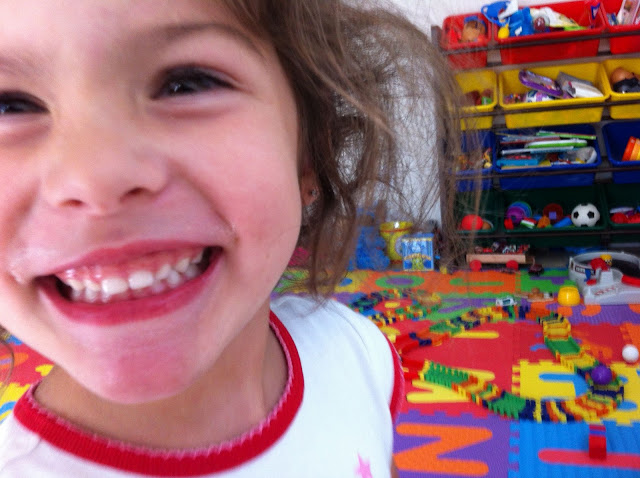 My kids drinking water... on purpose... and enjoying it! I can't help but notice that when it comes down to it, honestly, kids will eat/drink what YOU as the parent set in front of them. They may have preferred milk or juice, but today, I only offered water and they went for it! Score!! 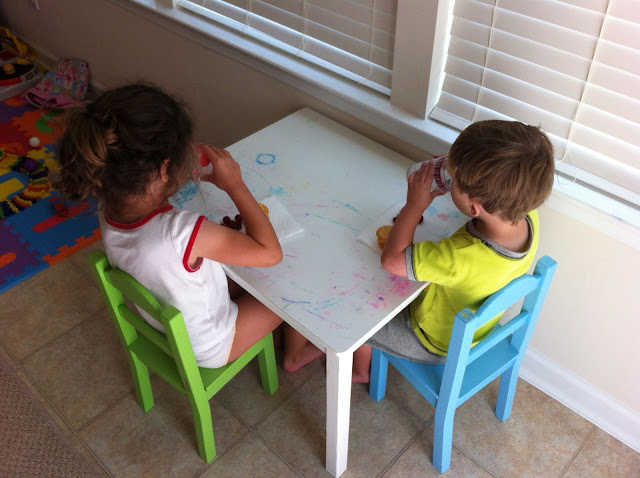 
Lunch was pretty low-key. A grilled cheese, apple slices, raisins, carrots, whole wheat pretzels and a yogurt for the kids. 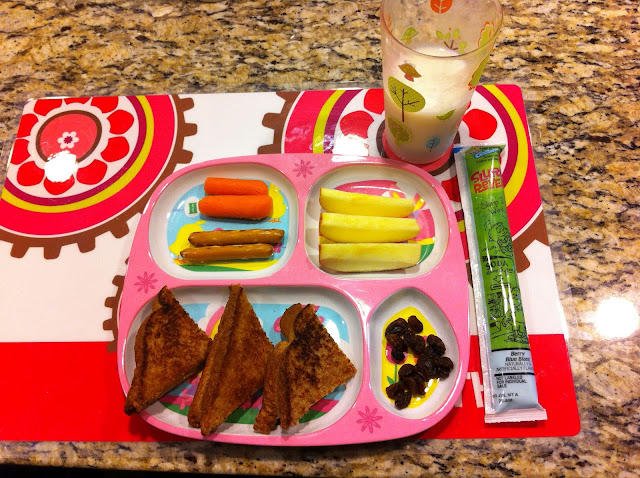 I didn't really eat a lunch today per se. I snacked on some of the kids' apple and had a 1/2 cup of applesauce with a flavored water to drink. It's amazing how much less (much less? weird.) I'm eating now that I've eliminated processed foods and am only eating whole foods. I'm hopeful the kids are feeling the same way because they are eating a good bit less than I'm used to. I think we're on the right track!


Mmmmmm. Dinner. As I mentioned, the kids and I hit the grocery store today and stocked up on fruits and veggies like you wouldn't believe! So tonight's dinner was a real treat, IMHO.

I made a pan-seared steak (put some olive oil in the pan 'til hot, sear steaks on both sides, add a pat of butter once seared) then transferred it to a 300° oven to complete cooking, basting it with the butter/oil mixture once.

I also placed chopped zucchini, squash and halved cherry tomatoes on a baking sheet lined with parchment paper, then drizzled olive oil over the mix as well as some Mrs. Dash and fresh ground pepper. I placed the vegetables in the oven on a low broil setting for about 10 minutes. ((I had removed the steaks prior to this and allowed them to rest in the pan, covered loosely with foil.))

Finally, I had LO shuck me some sweet corn (YUM!) that we tossed into a pot of boiling water. 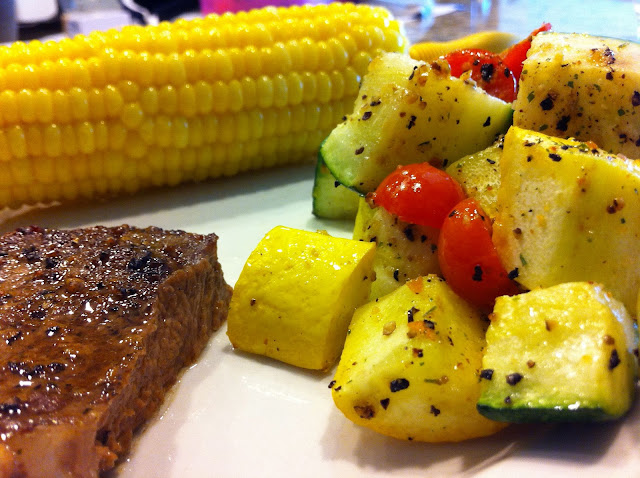 This meal was delicious! So light yet filling and full of flavor. I was VERY impressed to see LO eat all of her (two bites) of steak and Chase even ate one of his (tiny) bites! Hubs and I had to coerce LO to try the squash and zucchini, but after she did, she said she liked it! WIN!

I just want to mention that my family has gone WITHOUT any form of bread at dinner for the week and actually survived! I used to serve canned crescent rolls, biscuits, or frozen Texas toast with dinner almost nightly, so this is another big win for us. I'm so proud of me and my family! :))

The weekend is approaching, and I plan to keep my word to the little ones. I shocked n' awed them earlier this week when I said there would no longer be daily desserts after lunch and dinner, but that we would save such indulgences for the weekend from now on. Lo and behold, we all survived! ((To keep it real, hubs isn't 110% on board just yet... he still has his nightly ice cream... but I'm working on that next!))

Thanks for following along on our first week of healthy, whole food eating. I haven't decided if I'll keep going with daily food blogging or just hit y'all with random updates every once in a while... I'll leave it up to whomever chooses to comment in favor or against! ;)
Posted by mom2lo at 7:50 PM