I have to reprise this photo of Chase because it fully expresses my current feelings regarding the world as I know it: 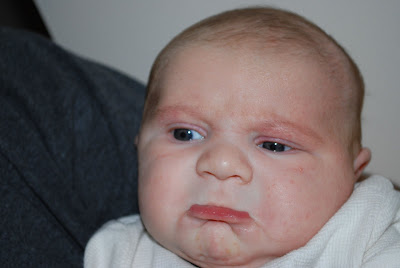 As I mentioned earlier today, I got some frustrating news at Chase's pediatrician appointment earlier today. I know I've mentioned out here that he's occasionally had some blood in his stools, but we determined he had a small fissure (ouch!) that was probably the cause of it. We've been testing his stools weekly just to be sure. Today I took him in for some vaccines (3 shots and 1 oral, a total of SIX vaccines -- sheesh!) and also spoke with his doctor. Apparently since his stool is still testing positive for blood, it's time to try something else. The doctor is taking him off breastmilk and putting him on a special formula, Similac Alimentum Hypoallergenic formula. He's thinking Chase has an allergy to milk protein.

This is so not cool.

If you've been keeping up with us, you'll know we're heading back to MUSC next Tuesday for another swallow study to determine if Chase is able to handle regular consistency milk (we've been having to thicken his breastmilk to keep him from aspirating on it). My hope and prayer for the past 4 weeks has been that we'll get down there and they'll say YIPPEE! he can have regular consistency milk, meaning... I can FINALLY start breastfeeding my baby!!!

Now that we've had this milk allergy thrown at us, the only way I can breastfeed, assuming we get the go-ahead next week, is if I eliminate ALL milk protein, whey, caesin, etc. from my diet. It's insane the amount of foods that contain these ingredients and the huge lifestyle adjustment this would require. Of course I'm willing to do this and more if it means giving my son the very best. I just can't truly wrap my head around all of this right now. I guess we'll know in two weeks if it truly is a milk allergy, and we'll address how we'll handle the situation then. It's one of two options: I change to a milk-protein-free diet, or I give up on my dream of breastfeeding my precious son and give him formula instead.

Although I can't stand the idea of Chase having a milk allergy, I'm more worried that it's not a milk allergy. If it's not, we'll be referred to a GI doctor who will run a bunch of tests to determine what, if anything, is wrong with his digestive system, intestines, etc. I guess the milk allergy would be the lesser of two evils. I just know we've been through so much already and we still have another major surgery in just a few short months... I was hoping for some taste of "normalcy" at least for a little while. I know things could be much worse for us (he IS a hypoplastic heart baby after all), and I feel so horrible for getting so heartbroken and disappointed over all of this. I just want my baby to be healthy, no matter what it means I have to do to make it happen!

Please pray for me as I deal with my worries and disappointments and for Chase as he deals with a potential milk allergy and/or GI problem.
Posted by mom2lo at 9:55 PM