When LO was very young and just starting out on table food, we immediately realized that she had some serious "texture" issues. The child wouldn't touch anything that had a weird texture: the "stringiness" of chicken, the "gooeyness" of cranberry sauce or jell-o, the "sliminess" of pasta. We knew we would have our hands full keeping this kid fed and satisfied.

Fast-forward a couple of years... she's still as picky as ever. Still almost impossible to get her to try new food. Still feeding the child at least one pb&j per day--every day. So I guess I was imagining Chase would be just as picky. But you know, he'd probably enjoy all the opposites of what LO likes, thus making dinnertime in our house a MAJOR source of stress.

Well, wouldn't you know it's as they say... every child is different, and a lot of times, you end up with kids that are exact opposites. In this case, it means Chase will pretty much put anything in his mouth that isn't nailed down to the floor. He's not picky. At all. It's awesome. And now that's he's pretty much shunned all forms of "baby" foods, I have no choice but to figure out ways to feed him table food -- enough to keep him full and happy.

Imagine my surprise when I was preparing dinner Monday night, and had a great epiphany: my kids can both eat the SAME THING for dinner!!! What an amazing realization! So I went to work making ONE meal (for the kids--hubs and I flaked out with some Joy of Tokyo take-out) for both of my kids, just slightly modified! 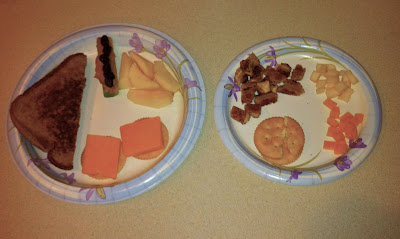 What a relief it was to not have to make THREE different meals for dinner. Usually it's one for hubs & I, another one for LO (Little Miss Picky) and one for Chase (baby food, etc.). I can definitely get used to this two-meal situation! And of course, the nights when I cook dinner (and don't go for take-out), I typically give both kids some of what we're having, which takes us to -- you guessed it!! -- only ONE meal for dinner! Yay!
Posted by mom2lo at 6:00 AM