Today's post is from Lindy, mom to fellow HLHS baby and MUSCer, Brandt. I had the opportunity to meet Lindy while she was pregnant with Brandt and show her my sweet Chase in person. Brandt turned out to be quite the Poster Boy for HLHS, sailing through his Norwood and Glenn recoveries, but hit a bump in the road post-Glenn.


On May 25, 2010, our sweet little Brandt Ethan Markevich arrived... perfect in every visible way. Four months earlier we were shocked to hear at my 20-week ultrasound, “There’s something wrong with his heart.” Those six little words introduced us to the terrifying unknown world of congenital heart defects. With two older heart healthy boys, my husband and I had never heard most of the medical terms that were suddenly being thrown around, and certainly not hypoplastic left heart syndrome. 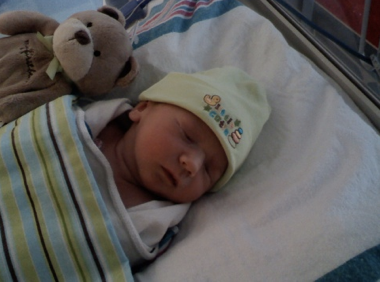 In short—we quickly learned—only half of our little baby’s heart had formed correctly. The left side was severely undersized. Surgeons would need to operate soon after birth, followed by a second and third open heart surgery as he grew for him to be able to survive. Almost immediately we realized our hope for this precious gift of life rested in the hands of our Great God, Who loved Him more than we could begin to. And we were so thankful to learn of the fantastic pediatric cardiology team at MUSC in Charleston. Our local pediatric cardiologist team has a close-knit partnership with MUSC, and strong success rates due to amazing follow-up between the surgeries.

So we chose the name Brandt, meaning beacon, with confidence that his story could lend hope to others. We did our best to prepare for his arrival, including an extended stay 4 hours from home. Just one month before his due date, a mutual friend at my dentist’s office of all places introduced me to Chase's mom. As soon as she heard our baby had HLHS, she whipped out these gorgeous pictures of Chase at 6 months, and told me how he was thriving after his first two surgeries. I got to meet her and Chase before we headed off to Charleston, and what an inspiration they have been. She put us in touch with CrossBridge Ministries in Charleston. They became our family away from home, even providing housing where we could keep the boys with us during Brandt’s time in the hospital.

At birth, he was quickly whisked away and stabilized. I had hoped to get to hold him briefly, but due to fragile catheters placed in his umbilical cord, we had to wait until the day before his first surgery. Pure love! 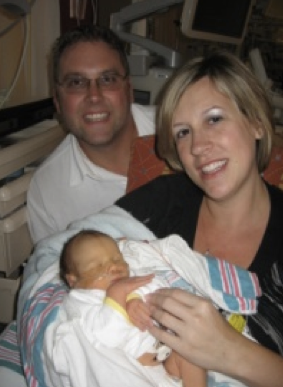 He came through his Norwood with flying colors, despite an extremely small aorta, even by HLHS standards. The next two weeks he amazed all of us with strong steady recovery to be discharged 3 weeks after birth! He went from this: 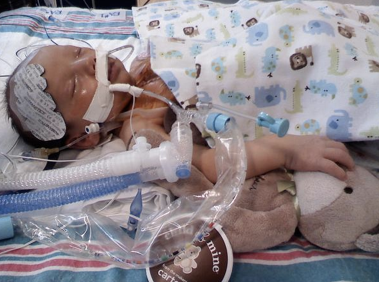 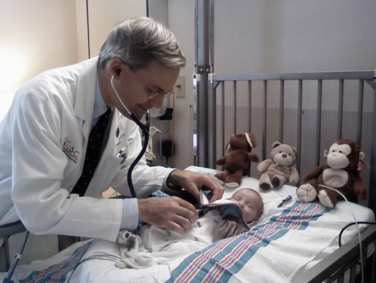 ...one tiny step at a time. Dr. Bradley, the head surgeon, continues his follow-up with each of these special little babies even to the recovery floor. Due to severe reflux that is also common to heart babies, Brandt struggled the first few weeks to gain weight. But once we got him home he took off, thriving with his family. 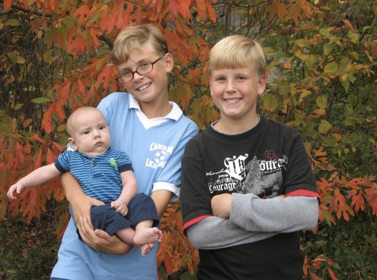 In some ways those months were very long, filled with many doctor visits, but in many ways they flew by. We treasured our time with him as all too soon it was time to head back for a heart cath and indicators that he was ready for surgery #2, the bi-directional Glenn. As his oxygen saturations had started to drop, we were ready for his heart repair to move to stage #2, but I think parents are never ready to see their little ones in pain again.

December 8th, he once again came through his surgery quickly and with great recovery—we headed home December 12th! But our normally happy baby was a screaming mess for 3 days straight following that trip home. Chest x-rays and an echocardiogram showed the actual surgical repair to be a huge success, but a lump had developed in his chest incision, indicating an infection. His local cardiologist sent us back to MUSC on emergency basis, where Dr. Bradley had to reopen his chest and trim bone and tissue to get rid of a nasty staph infection, official diagnosis mediastinitis—yet another life-threatening condition, but God spared him with the quick treatment. 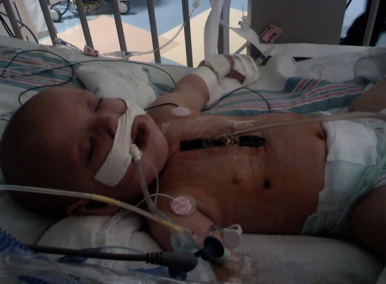 They used a wound vacuum to suck out the fluids until they were able to reclose the incision. This time was agony for me as he had a terrible reaction to some of the sedation meds they gave him and had to be restrained to keep him from pulling out tubes and wires. He also had 3 weeks of strong antibiotics. His recovery was quite drawn out. We spent his first Christmas at MUSC—one we will never forget. He was exhausted and had lost weight again—but we were thrilled to find the infection had cleared at the end of his antibiotic regimen. 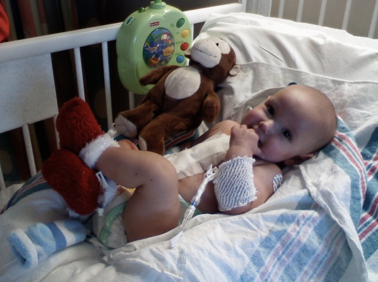 Once he got over the pain of all the extra surgical procedures, our happy little Brandt was back. And he has more energy than ever, and is packing on the pounds. We look forward to getting to spend time with some of his heart friends once his semi-quarantine is over following the flu season. He’s not scheduled for any more surgery until around the age of 3, the Fontan surgery. We continue to pray for healing for him as well as so many of the heart babies we’ve had the privilege to meet.
Posted by mom2lo at 6:00 AM