My sweet little innocent Chase has a problem. A BIG problem. He has a temper like you wouldn't believe! I know it's hard to believe, right? Ya, I figured you'd think that. So I thought I'd provide proof.

The other night, he was fussy and crying because he was hungry and mommy just wasn't getting dinner put together fast enough. So I offered him a snack. It wasn't a cookie. It wasn't a cereal bar. It wasn't yogurt or applesauce. It was a wagon wheel (you Gerber fans with little ones will know what I'm talking about).

Apparently, Chase wasn't in the mood for a wagon wheel. I'm pretty sure he would've been happy with a cookie. But NOT a wagon wheel. I attempted to give it to him and he swatted it away, flinging it across the play area. I went back to the kitchen, figuring I'd attempt a "tough love" approach and let him cry for a few. I was working on dinner when I heard, Thud!

I wondered to myself, "What the heck was that?"

Then I heard it again.

Curious as to the source of the noise, knowing I had a pretty good idea of what it was (but was hoping I was wrong), I wondered into the play area to see what was going on. I decided to turn on my iPhone video camera to obtain physical evidence. By the time I went in there, he had moved away from the flat part of the wall. The wall where he had been -- yes -- banging his head against it. He was so hungry yet so displeased with his snack option that he'd taken to banging his head against the wall.

As I mentioned, he had scooted away from the flat part of the wall when I came in and turned my camera on. This is what then transpired:

Yes, you saw that right. He didn't want the juice I offered, so he attempted to fling it as far away from him as he could. If you watch closely, you'll see at one point he catches a glimpse of the corner of the wall. Then he continues to cry for another moment before BAM! He made the decision to bang his head into the corner of the wall with a great, big "Umph!" Then of course he immediately breaks out in tears again.

I was in total disbelief. I had the camera running and my jaw on the floor. I couldn't believe I had just witnessed that. If it weren't for the video above, I'd swear I saw it wrong. But no. He was mad. VERY mad.

And now he has the bruise and a lovely indentation on his forehead to prove it: 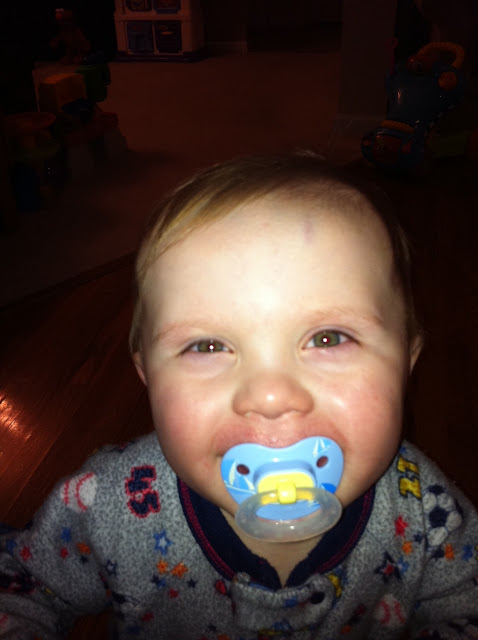 See what I mean? He's got a BAD temper. Thankfully he's usually in his typical sweet, happy mode. It's just when he's hungry or mad or tired that he starts these kinds of antics.

Side note: When I showed hubs the video, he laughed his face off. Seriously. Over and over again. He had to grab an inhaler he was laughing so much. At his own son, hurting himself. Funny stuff, apparently... ;)
Posted by mom2lo at 6:00 AM