Chase is undergoing a heart catheterization right now (they took him back around 8:10 AM). It's what they're considering a "pre-Fontan" cath, although I don't like to think of it that way. Their way makes it sound like the Fontan is just around the corner, and this momma ain't no fan of that idea. And really, it's their fault because they told me it wouldn't be Fontan time until Chase was 3 or 4 years old. So I'm choosing not to call this a pre-Fontan cath. I'm going to choose to call it a diagnostic/interventional cath procedure.

My boy had Versed for the first time before they took him back for the procedure. I was curious to see how that would work out. Would he be a funny drunk? Or an angry drunk? Would it have no impact on him whatsoever? Or would it cause an unexpected complication?

I'm happy to say it seemed to do what it was intended to do. He was already very sleepy (following a very L-O-N-G night where there was maybe 3 hours of total sleep for Chase, hubs and I), and after the Versed kicked in, he started to act a little bit silly.

See what I mean?

It obviously worked because he let the anesthesiologist (dressed in scrubs, of course!) take him from mommy and carry him out of the room. Yay?

He's going under general anesthesia for (I believe) the sixth time. And intubated for the sixth time. They're going to insert a catheter into his femoral artery as well as an artery in his neck and fish them all up and around his heart, arteries n' stuff (obviously I don't know the technical terminology) to do a bunch of things.

What sort of things?

Lots of things. As I mentioned, they're considering this his pre-Fontan cath. Some of the highlights include:
Hubs and I are sitting in the PCICU waiting room, where we spent countless hours during Chase's birth, Norwood surgery, two bronchoscopy procedures and Glenn surgery. Being here brings back a flood of memories. The familiar surroundings, smells, people... I told hubs I felt an overwhelming urge to go to the pumping room that's right next door to the PCICU waiting room. I spent countless hours in there, too. I'm so glad we're past the hurdle of surgeries (at least until the Fontan), but I'm not loving being here for Chase to endure an invasive cath procedure. My sweet, sweet boy... 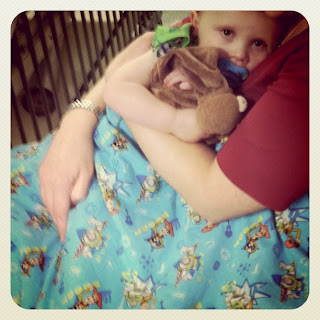 It is now 11:07 AM. We've received three pages/updates so far. Basically (1) they have completed an echocardiogram (after he was under anesthesia, so they should get great images with him being still), and (2) the interventional pediatric cardiologist (a.k.a. Dr. Baker, the one performing the cath) obtained access (meaning the IVs and catheters are in place) and he is taking measurements and checking Chase's oxygen saturations at various points throughout his circulatory system, and (3) Dr. Baker is still taking measurements before he balloons the LPA. It'll probably be about an hour before we receive our next update.

Thanks in advance for your thoughts and prayers. We are hopeful by ballooning his LPA, it will give him more time before he needs his Fontan. But more than anything we are hopeful the procedure goes as expected without any complications and that Chase recovers well. Please continue to keep him in your prayers.

I'll post updates as we receive them. Thank you for your prayers and patience.