I'm so glad to have Chase's cath behind us. And for all intents and purposes, we shouldn't have to head back in for any procedures or surgeries for a YEAR! Yay! I don't even want to think about going in for the Fontan, so I'm totally gonna block that out of my mind for the next 12 months (or until whatever point in which I'm forced to deal with it). I'm so proud of my little man! He did so great!

I knew this one would (hopefully) be easier than the last one, our pre-Glenn cath in February 2010. For that procedure, we knew he would stay intubated afterward and recover in an ICU, which is not the standard practice, but was a safety measure we went with based on his previous history with anesthesia. It was so hard to see him after that cath. He looked like he had just come out of surgery!

This time around he looked MUCH better! See?

Couldn't help but take a pic of the monitor... See that 96? That's his o2! Wow, right?! He was on oxygen though, so it doesn't count. I just thought it was cool to see it so high for a change! :)
After being awake for a bit, drinking 12 sippy cups of apple juice and eating most of a banana, our little guy started to perk up!

After four hours of hourly vitals in the same day area, we were allowed to transfer to the floor, 8D. It used to be 7C, but they recently moved to a new floor and I must say the rooms are much nicer! We settled in for the night and were so happy to see some of our nurses from previous stays. Everyone commented on how BIG Chase has gotten!

Chase and I had a pretty good night. He slept for about 2 hours, was up for another 2, then slept for 3. It was nice to get some sleep on the floor! That was a rare "treat" during our previous two stays. Tuesday morning we needed to go for a chest x-ray and an echo before we could be approved for discharge.

We returned home Tuesday afternoon and it was obvious our boy was glad to be back home. A short nap, a quick shower and little dinner later, he was very much back to himself. Yay! He's been improving even more each day and honestly, you wouldn't know he'd been through a heart cath on Monday if you saw him for yourself.

Case in point. After lunch yesterday: 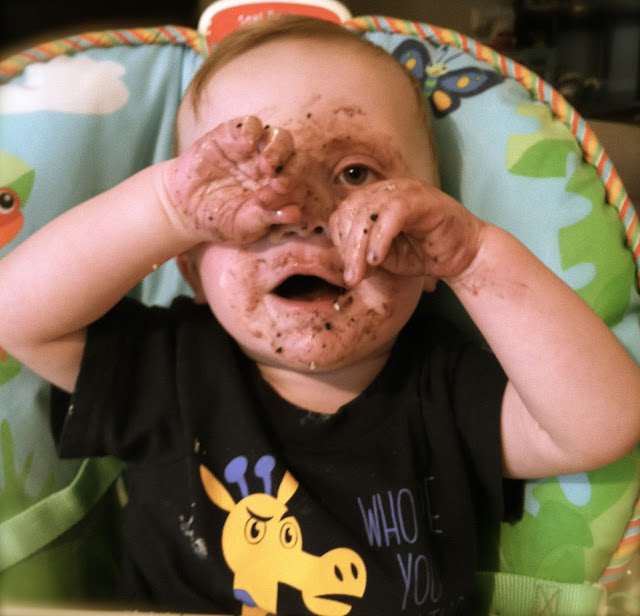 We were playing "Where's Chase?" while he was covered in Oreo goo. Good times!

I'm SO COMPLETELY AND TOTALLY looking forward to releasing all of us from our cold/flu/RSV season and pre-cath bubble!!! That day will be here before I know it (I hope) and we can finally get out there and enjoy doing fun stuff again! Yay!

Thanks again to our friends and family for the prayer support during this week! God clearly had His hands on our boy and brought him through this procedure successfully. Thank you, Lord!

P.S. Have you participated in my very first ever blog giveaway ever? If not, click here to leave your comment and win a messenger tote, handcrafted by yours truly! :)