Well, we met with our PM, a second Ryan PM, two reps from the flooring company and an Armstrong flooring rep at the house Friday afternoon to take a look at the kitchen floor. Whew!

I'll be honest -- it was a tough meeting.

Basically imagine 5 professional construction/management men telling you you're crazy and that your floor is, in fact, exact production quality and that there is nothing wrong with it and that it matches the sample you were provided with perfectly. Then imagine you try to stand firm and explain that the sample you were provided showed NONE of the orange/peach undertones and certainly didn't contain entire sections of orangey squares, only to be told that it "depends on the light" in the room, or whether there are "shadows," or that once you "install your window treatments and put a table in your morning room" (which we are NOT planning to do as the morning room will be a sort of downstairs play area for a bit, thankyouverymuch), then you'll see a true reflection of the floor and the "tones you have a problem with" will be reduced.

I don't see almost completely orange squares here. Do you? 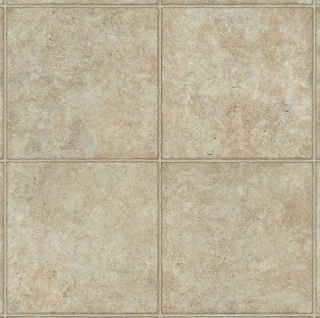 Our PM asked me what solution we were after, so I mentioned what was the first of two options: credit us back the additional $1,200 we paid to upgrade to a floor we are not happy with (which he immediately interjected that apparently the floor must not bother us that much if we're willing to live with it and we were just after a financial adjustment -- wha??!), THEN I proceeded to mention the other option (that I only mentioned second because I thought the first option would be the easiest on THEM) would be to replace the floor. The team of guys, one of which at one point mentioned how they all met together BEFORE the meeting with us to ensure they were all on the same page (gee. thanks.), begrudgingly mentioned that, although it is NOT standard protocol and would be a  ONE-TIME thing, then something or other mumbled about a first-born child, agreed to let us select a new vinyl flooring in the same pricing level. Our PM was sure to speak up that, although our closing isn't scheduled until March 19th, he has several additional deadlines prior to that day that we're not aware of, basically confirming that yes, this is a HUGE inconvenience to ALL of those involved.

After the meeting was over, hubs and I headed over to the flooring company to scope out the available options. I was already pretty sure that there wasn't going to be anything that would jump out at me as "The One." When we went through this process back in December, I distinctly remember complete dissatisfaction at the poor choices and lack of variety we had to choose from. So, after dragging two kids out in the pouring rain and fumbling through the samples, I decided it was NOT worth it to me to change the flooring simply because the only options we could change to were completely hideous. Seriously. They were all dark, or really small 8x8 squares, or PINK (yes, pink), or otherwise just not even close to what we want. For the record, it really SUCKS having your hands tied and only being able to choose from samples that NVR allows the flooring company to show us, rather than the BILLIONS of actual flooring options available in the world today. Totally sucks.

I guess the team of guys should be pretty happy that we're not making more work for them or causing delays. I still hate the fact that my kitchen floor has OBVIOUS sections of mostly-orange squares that we paid additional money for, but we did all we could do, and honestly, we plan to rip the floor up in a year or two to put in actual tile anyway (we had originally planned to keep the vinyl for about 5 or so years since we ended up paying for the upgrade).

Oh, well. Honestly this is a pretty minor thing. At the end of the day, the Ryan team did the right thing by allowing us to select a new floor, but I still do NOT care for how it was handled or how we were treated during that meeting.

On a happier note, check out the latest pic of the house now that the landscaping and sod is complete. So pretty! 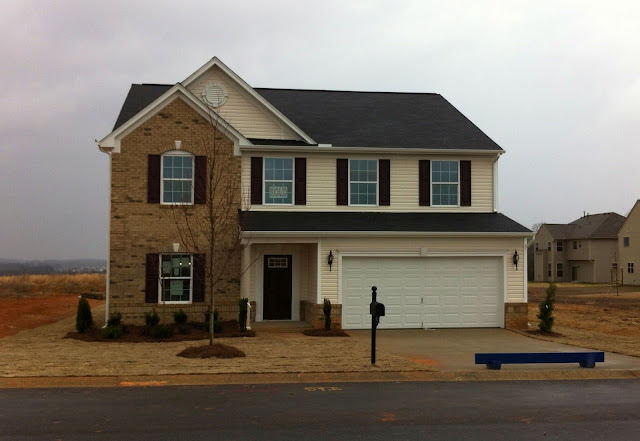