I had to work last Saturday from 9A-6P, which meant hubs was flying solo with the kids for the day. It was a busy day for me at work, so I didn't have the opportunity to check in as often as I usually would via text or phone call. Imagine my surprise when I came home that even to a fabulous meal from Outback Steakhouse waiting on the table -- via candlelight -- from my sweet family. Apparently it was LO's idea to light the candles (that's my girl!). Hubs had taken them up to the restaurant to pick up all my faves: a bloomin' onion, salad w/ ranch dressing, ribs, bbq chicken, steamed veggies and bread. It was DIVINE! And so completely unexpected (that's the best part!)! We enjoyed a nice family dinner together, during which LO explained what was on the docket for the rest of our evening.

Apparently my girl put together a "To Do List" (now that's my girl!) of the things we were going to do together that evening. Earlier that day, she sat down, grabbed a crayon and a piece of paper, and got to work writing out the activities of the evening. I was shocked and amazed to hear from hubs that she did this completely on her own, writing out each task herself. Obviously the spelling isn't quite there yet, but I find it incredible that my 4 1/2-year-old was able to write this list out herself. Check it out! 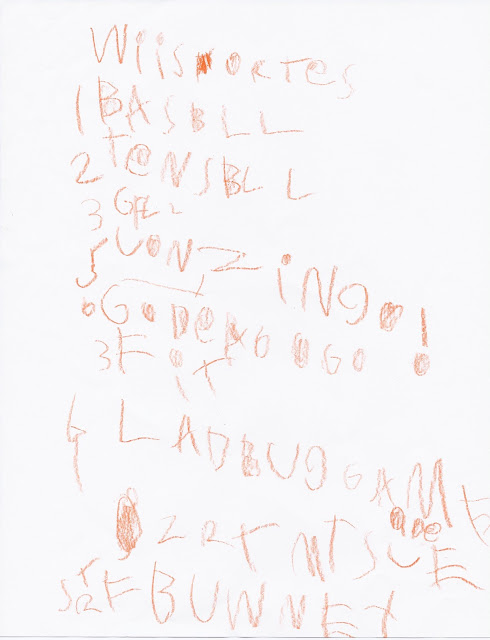 And now, here's her list again... along with some translations from mommy: 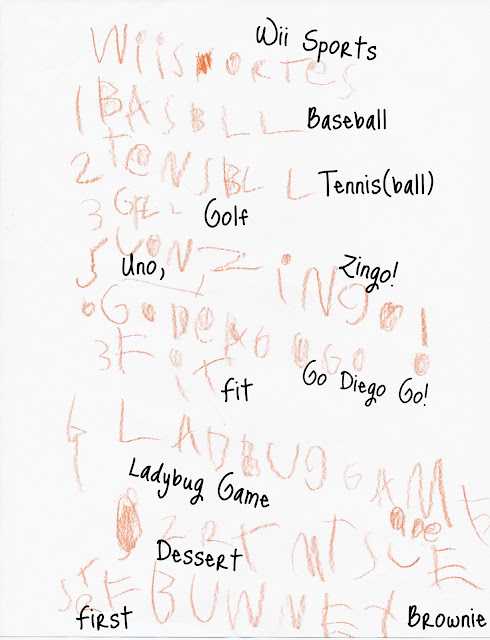 At the end there, she wrote "Dessert First" then "Brownie" -- I found this quite comical! She is her mama's girl!

What a great night of family fun we had! The only games from the list we didn't get to were Uno and Zingo, but we'll be playing those ones once the kids are feeling better.

Speaking of which, I guess I haven't mentioned here that LO currently has pink eye and a sinus infection, and Chase has had a chronic cough for the past 2 weeks. It's been awful! Chase had pink eye 3 weeks ago, it was finally cleared up for over a week, then LO picked it up. And both of them have had a horrible cough for 2 weeks -- Chase especially would cough All. Night. Long. and sounded completely awful. I called the pediatrician last Tuesday; they said give Benadryl & Delsym. Three days later, on Friday, I took him in to see the doc; he said Benadryl & a humidifier (duh). Two more days later, on Sunday, I called and inquired about it possibly being allergies (hubs has 'em and they've been acting up with this "early spring" we're seeing here); doc said Zyrtec. After another horrible night of no sleep for Chase (as well as hubs and I, of course), along with LO's now worsening nose gunk, I took them both in on Monday. Doc confirmed pink eye for LO as well as a sinus infection, and put both kids on amoxicillin. Chase didn't have a diagnosis per se, but I was adamant that a persistent cough for two weeks was unacceptable and no OTC meds were helping. So they both started the antibiotics yesterday and Chase seems to be acting much better, although his cough is nowhere near gone yet. LO is still pretty miserable but I'm hoping she perks back up soon!