Hubs, LO and I returned from our very first ever family vacation, which we spent in Hilton Head, SC! We had a wonderful time on the beach, at the pool and seeing the sights of Hilton Head. Here's a photo recap of our trip! Enjoy!

We stayed at The Westin Hilton Head Resort & Spa. If you recall, we got a great deal on Priceline at only $64/night, which was absolutely fabulous because we really didn't feel this resort was worth the average $189/night price tag. I'll share more on that later... 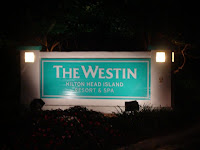 We arrived Sunday afternoon and headed right over to the beach. LO actually seemed to enjoy splashing in the water with daddy on day 1. Not-so-much on day 2 (as you'll see shortly). 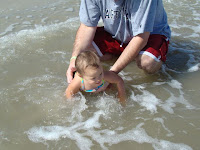 For dinner Sunday night, we headed to One Hot Mama's. We actually intended to eat at the Hilton Head Brewery, but upon finding said establishment, we decided against risking whatever disease appeared to be running rampant in that location. Luckily, right next door, we found One Hot Mama's and had quite the delish dinner! It was hands down the best BBQ pork sandwich I've ever tasted! Yum! 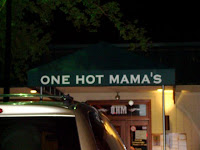 After dinner, we made an impromptu trip to the local Harris Teeter grocery store to pick up some bananas (for LO's breakfast) and soda (for mommy & daddy's breakfast). 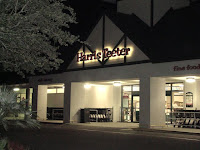 Then it was a quick stop at Marley's Ice Cream for--you guessed it!--ice cream! Yummy! LO wasn't too into it, but it was getting late and past her bedtime. 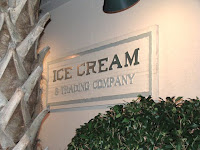 Monday morning, we headed back to the beach. This picture cracks me up because it looks like it was super-foggy on the beach! Actually, it was the condensation misty stuff all over my camera, proving just how humid and sticky it was out there! 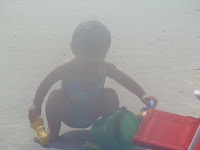 Love this shot of LO hanging by herself. 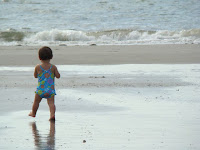 As you can see, she didn't enjoy the beach the whole time we were there on Monday. 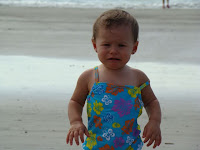 Here's our little social butterfly making yet another friend. She kept finding little tots her size to chat with and share her toys with the entire time we were in Hilton Head. 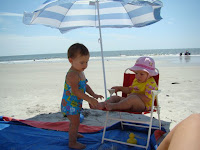 As you can tell, LO had her own plans for our family vacation. She had things to do, people to meet, wandering to do... 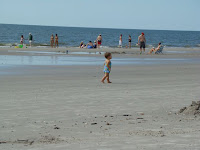 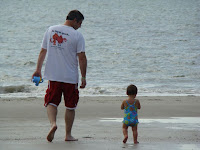 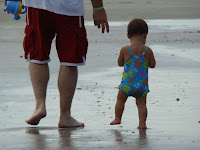 Exhausted after a long day of beaching and pooling. 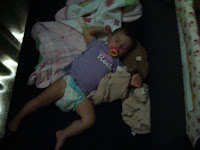 We did a little sight-seeing while we were there, too. This is the lighthouse thingy near some golf place on some part of the island (plenty of information, huh?). 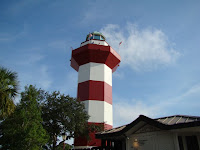 Ah, The Salty Dog Cafe. We opted not to eat here just because it wasn't quite dinner time while we were on this part of the island, but I thought it would be nice to take a pic anyway. 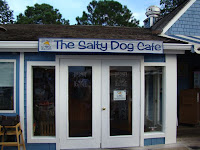 Outside of The Salty Dog Cafe, there was a lovely little patio with live music playing. Not being one to pass up an opportunity to entertain strangers, LO busted a move. I think there was a Beyoncé move or two in her routine:

Later that night, we headed back towards our hotel and stopped for dinner at Guiseppi's Pizza. It was To. Die. For. I had a delish slice of pineapple pizza and helped LO with her spaghetti and meatballs. Hubs had some kind of a meat explosion wrapped up in a calzone of sorts. It would've been an awesome experience if it weren't for LO's bum. That's right. The poor little thing developed one of the worst diaper rashes ever, and being the horrible mommy that I am, I totally forgot to pack diaper rash cream. 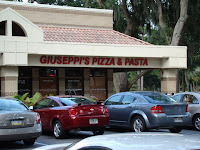 So, after dinner we walked down to the Piggly Wiggly and picked up some diaper cream. 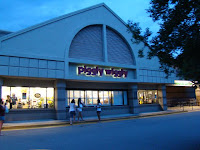 Well isn't that a wonderful note to end this post on? Diaper rash and diaper cream? Fun times. Actually, after the Piggly Wiggly run, we headed back to the hotel, put LO down for the night and started packing up to leave the next morning. I'll share more in another post about our hotel issues... We can't go on vacation and not have problems, right?
Posted by mom2lo at 11:35 AM