Okay, folks! Here it is! The long-awaited, much-anticipated post all about LO's first birthday party! :) Sorry it took so long to put this together! I just wanted to be sure to capture all of the highlights of the planning, party, etc.

So let's start with the invitation. I chose the "Hugs & Stitches" theme, but didn't want to send a generic invite where I fill out all of the lines inside for Who/What/Date/Time, etc. I wanted something a bit more personal. So here's the standard invite that can be purchased in the theme: 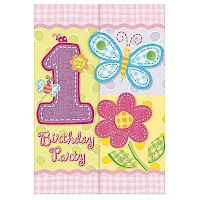 I enlisted the fabulous design services of my incredible sister-in-law (she's getting married in September--check out her blog!), and this is what she came up with. It was absolutely fantastic and perfect! This is the outside of the invite... 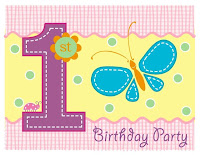 Sooooo cute, right? Well, check out the inside (some info has been removed for obvious reasons): 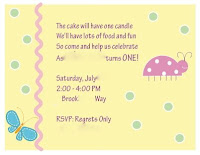 The invitation couldn't have been more perfect for this party! Now let's move on to the BIG DAY! LO was absolutely hilarious when I came home with a bunch of balloons--I think 13 in all! She was in heaven! We could've just called it a day after letting her play with those balloons (and tangle them up like crazy--thanks to Gramma and Grandpa for untangling them!). 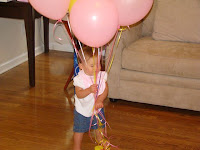 It wouldn't be a party if we didn't grab a pic of the food. Yes, the food. 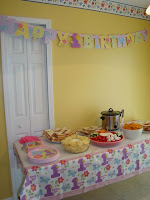 Here's a pic of the cake. A good friend of mine manages the bakery at our local Bi-Lo and she let me get all crazy about how I wanted the cake. As with all things, everything wasn't perfect with this party. The cake was one of those things. I had an image in mind of what I wanted, and I described it (and even drew it out) quite well! Unfortunately, they decided to make the cake look exactly like the napkin... who wants a gigantic napkin-cake!? Whatever. It wasn't as pretty as I was expecting, but it sure was delicious. It was a white cake with raspberry filling and yummy buttercream frosting. YUM-LISH! 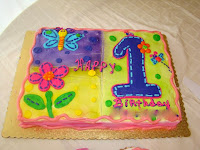 Here's a picture of LO's smash cake. Isn't it cute? This one was a yellow cake with buttercream frosting. 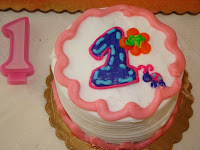 Here's LO and me (yes, that's my hand!) as everyone is singing "Happy Birthday!" to her. I was worried she'd get embarrassed or super-shy with everyone staring at her and singing. But, no! This little girl is quite the entertainer! She was just eating it up! 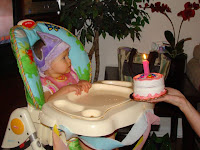 Hmmm... Her first thoughts of cake were a bit perplexing. She wasn't quite sure about it at first, but definitely got the hang of eating such yummy cake! 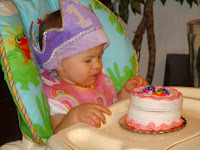 Here she is enjoying the cake. Notice that adorable pic on the TV in the background? Oh, yes. That was the dreaded video presentation that was the thorn in my side the day before (and day of!) her birthday! 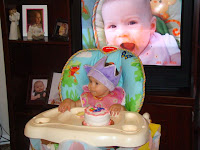 When LO was done with her cake, she made sure to let everyone know it! She has this adorable(?) way of clinching her jaw, making fists and squealing when she's frustrated or angry or upset or doesn't get her way. Am pretty sure it's adorable right now, but it will probably get old at some point. Unfortunately I'm pretty sure she gets this trait from her mommy's side... 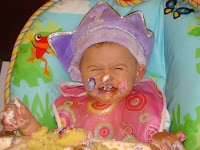 LO really wasn't that interested in the opening of presents. I was surprised! 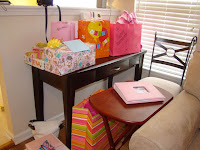 Of course, I made a novice mommy error in opening the biggest (and what ended up the most engaging) toy FIRST. It was electronic, had lights and sounds and everything. She was engulfed in this toy the entire time so mommy ended up opening all of her gifts. Fun. 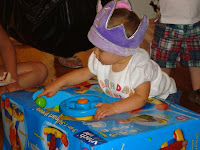 Here she is playing with a stuffed piggy she got from a dear friend of mine. She loves her piggy! 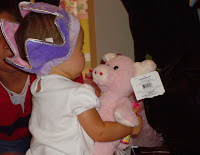 Later after all the gifts were opened, she got to play on the ride-on toy we had opened first. Here's hubs pushing her around the living room (isn't he handsome?!).

Big surprise... LO loved her new bean bag! And one of those durn popcorn popper things? Ya, she would literally pick it up and carry it everywhere instead of roll it on the ground so it makes noise. Not sure I mind this technique...

Here she is chillin' with her popcorn popper on her new bean bag. 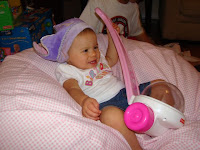 At the end of the day, it was time to put in one of her new "Elmo's World" DVDs and break in the new bean bag. Can you tell she had a long day? 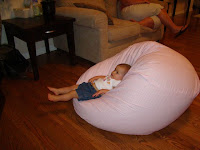 Now, for those of you who may have children, this part may be hard to believe. See, LO had a short morning nap before the party (like 9:00 AM), and had a short afternoon nap after the party (around 5:00 PM). She hung out and played with us all afternoon. Keep in mind she typically goes to bed around 8:00 PM. Well, my dear friends from Atlanta drove up for the party, but were leaving that evening. We got to talking and decided to go out for dinner with my sister, brother-in-law and nephew. It was 8:30 PM, people, when this decision was made. So we were heading out to dinner a good 45 minutes past her bedtime. We had no idea how she'd behave.

Oh. My. Goodness. I don't know if she was on a cake high or what, but this child was a pleasure the entire time we were at dinner! I couldn't believe it! I brought all kinds of entertainment, snacks, drinks, a paci, her teddy that she sleeps with--even had a back-up plan for hubs or I to take her out to the Jeep to watch a DVD if she got super restless. We didn't need any of that stuff! Okay, maybe some snacks, but that was it. She was A-M-A-Z-I-N-G!!! We didn't put her to bed until almost 11:00 PM and--as you can imagine--she slept like a baby, even though she's officially a toddler now!

Anyway, that's the rundown of LO's first birthday party! It was amazing, fun, exciting and all-around wonderful! Hubs and I celebrated the fact that we made it through our first year of parenthood, and LO celebrated the greatness of her one year of life! We are looking forward to all of the milestones and accomplishments that await our LO during year #2!