My little baby girl will be 13 months old in just a few days. It's so hard to believe how quickly she's growing up! I have to say one of my most favorite things about her growing up is the increased number of activities she can participate in--just like mommy and daddy. Walking, of course, was the biggest first milestone she reached. Now, if only I could get her to keep her shoes on, she'd actually get to walk around when we're outside! Silly thing! Another big milestone was the transition to "grown-up" food. This has been awesome in one sense, but extremely frustrating in another.

If you know anything about me yet, it's that I love to cook (and bake, of course!). But I'm having a hard time finding things to cook that hubs and I will enjoy but also that LO will eat, too! She is sooooooooo picky! First of all, the girl straight up refuses to eat meat. Any kind of meat. All kinds of meat. If meat somehow manages to sneak into her mouth, those little fingers will go in after it and get it out--pronto! Ugh. She also isn't a big fan of pasta, which both hubs and I could eat our weight in on any given day. So what will the little one eat? Corn. LOTS of corn. Green beans. Mashed potatoes. Sweet potatoes (like they're goin' out of style!). Bread--but only sometimes if she's in the "mood" for it. One thing she could eat her massive 20 lbs. worth of weight in? 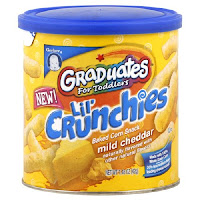 Anyway, finding things that LO will eat is only half of the battle. The other question is whether or not it's healthy for her! See, I don't want to start her out this young with the bad habits I've got (cake, anyone?). I want to feed her healthy food and snacks. But it's so hard sometimes to know what the "right" things are that I should be choosing. Like, just because it has a Gerber label on it, does that mean it's the right choice for LO? I dunno.

I was surfing for info on this earlier this week and I found what looks like a great little book: 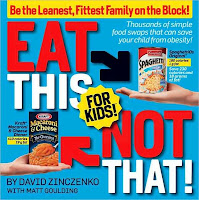 I haven't purchased it (yet), but it looks like this will be a great addition to my library! I mean, who would've known that Spaghetti O's are healthier than the ol' blue box of mac & cheese? Certainly not me! Would you believe I've been feeding LO Kraft mac & cheese since she started eating "grownup" food?! Ugh. I mean, really, it shouldn't be that hard. But this book looks like it'll be really helpful in choosing the right things to feed LO for snacks, when we're eating out, or even what to cook at home.

The best part? There's also a version of this book for adults. Guess I'll be adding two books to my library!
Posted by mom2lo at 4:25 PM