My poor child. We spent Sunday afternoon at the Emergency Room after LO had a bit of an accident that morning. Hubs and I were "volunteering" in the Toddler Nursery at our church during the morning worship service. There was one particular child that was all up in LO's business the entire morning--wanting every toy she was playing with, all but sitting on her lap during snack time, wandering into the way while LO was on the swings, etc. She eventually "gently urged" (read: pushed) LO into a table because she wanted the mat LO was standing on. LO hit the table -- head first -- and ricocheted onto the floor, bumping her head a second time. I picked up the offender and moved her out of the way while hubs rushed to LO's rescue. Immediately he noticed the bleeding gash over her right eye. We put a cold wet paper towel on it, grabbed a baggy of ice and headed out.

I called my mom, who happens to be a NICU nurse at a nearby hospital. She said to keep the ice on it to help prevent swelling and that it probably wouldn't need stitches. We stopped by the hospital where she works so she could see it for herself, and because LO was asking to see her Mona.

My mom looked at it and decided it might actually need a stitch or two, and recommended we take LO downtown to another hospital that is equipped with a pediatric emergency unit. We loaded LO up and were on our way. I kept trying to apply the ice for a minute or two at a time even though LO had a fit each time. I hated doing it but I knew it was in her best interest.

We arrived at the ER, checked in, and waited about 10 minutes before we were moved to the Pediatric ER waiting area. We were the only ones in there. Whew! I figured it couldn't be that busy on Sunday morning! A few minutes later, we were taken back to a small room with a crib, were given a tiny little gown for LO, and were seen by a nurse. It was a good 30 minutes before the doctor made his appearance.

He looked it over, we discussed the options, and we decided to let them put some numbing stuff on her eye for 20 minutes so the doctor could get a better look at the laceration, and possibly, if needed, put a few stitches in. After 20 minutes, hubs went looking for the nurse. She said the stuff needed to stay on 30 minutes.

We waited another 30 minutes (keep in mind LO had 2 band-aids over her eye holding this numbing stuff in place, and had to do our best to keep it from oozing into her eye, causing who-knows-what kind of damage if it were to get into her eye) before the doctor and his team of 3 or 4 nurses came in to help hold my precious baby girl down while the doctor took a look at her injury. I was there to hold her hand and whisper in her ear (over her ear-piercing cries) that everything was gonna be okay.

The doctor ultimately decided the laceration was relatively superficial and wouldn't require any stitches. His diagnosis required us to simply put some Neosporin on the gash twice a day for the next 3-4 days.

We will end up paying in the neighborhood of $1,000 for a 3-hour trip to the Emergency Room so a doctor could prescribe Neosporin for our daughter's laceration.

Ultimately, our peace of mind is well worth it. I would've hated myself if we had just taken her home only to find out 2 days later that the wound was infected, needed stitches, and she'd need a round of antibiotics to clear it up.

Here's a pic of our precious girl at the hospital: 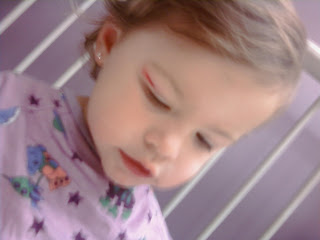