Okay, honestly, it just doesn't seem like there are big enough changes from week to week to justify posting a weekly pregnancy update. So, I think I'm gonna just stick to the even weeks and provide these updates every other week instead!

Belly Button in or out: Totally still IN. I don't expect it to pop out--ever.

Wedding rings on or off: SO on. Starting to get a little bit tight first thing in the morning but then not so bad the rest of the day. I have noticed a little rash on my finger under the rings so I'm guessing they're rubbing a lot more during the day. I really don't look forward to having to take them off because LO was close to 4 months old before I was able to put them back on!!

Food cravings: Still craving chicken--especially BBQ and Buffalo-style--but now I've added a bit of a sweet tooth. Hubs, LO and I went out for dinner with some great friends and their little 2-1/2 year old son Saturday night, and we stopped at Marble Slab Creamery afterward. Hubs, LO and I split a Swiss Chocolate ice cream with mini chocolate chips mixed in. It was DIVINE! We're planning to run by there again tonight for more, and will probably end up with a quart or two to bring home! Yum!

Food aversions: None, really. I haven't had big issues with foods, smells or anything specific with this pregnancy, which has been really nice!

Nausea: Pretty much over it completely (knock on wood!). I did have a nasty stomach bug or food poisoning last Thursday and was MISERABLE the entire day. I was puking and stuff and it was awful! So glad it was temporary!

Energy level: Haven't been able to find it since I was 14 years old!

Weight gain: At last check, I've gained a total of 6 pounds so far. I'm sure this will start increasing all too soon!

Maternity clothes: I'm desperate. I've been wearing some of the maternity clothes I bought when I was pregnant with LO, but now I'm either sick of some of them or they don't fit. I'm planning to hit up Gap and Old Navy tomorrow when I can save an extra 10% with my Gap Silver card! Thank goodness for the 1st Tuesday of every month! :)

Baby's changes: He's busy flexing his arms and legs — movements that I've already begun feeling! I can't wait for hubs and LO to be able to feel this little guy moving around!

Next appointment: June 15th - the big 20 week ultrasound appointment! Should have some more pics of our little guy to share after this appointment!

Other: We DID purchase the Bonavita Metro crib and tall dresser in the Licorice (black) finish last weekend. The baby's room is painting and ALMOST all of the junk in his room has found a new place to stay or has been donated. Hubs is pushing along on the deck -- he plans to be done by the end of the month. Also, we're really looking forward to a beach trip next week with some of our dear friends! Life is good and we are so thankful to be so blessed!

Okay, so here's the 18 week photo... Sorry to be so lame by taking the pic with my cell phone instead of my awesome Nikon D60. 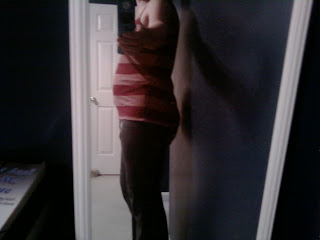