Then Comes Marriage... (PART I)

Yes, it's true. Hubs and I dated for all of 11 months before he popped the question. Here's how it went down:

It was Monday night, October 10, 2005. Hubs and I were leaving the next morning for a week-long vacation. We were flying to Illinois to meet his sister, then a 2-hour drive to meet his parents. The trip also included a stop at one of his college buddies' house and a golf tournament in the little town he grew up in. I was really looking forward to the trip mostly because it meant "serious business" that I was getting to meet his family and some college friends. We were definitely going somewhere with our relationship.

So back to Monday night. We went downtown for dinner. Hubs was wanting to go to the quaint little Italian place we went to on our first date, but it was closed on Mondays. So we ended up at another nice restaurant and had a wonderful dinner. There was so much I needed to do after dinner (finish laundry, pack, etc.), so I was a bit anxious to get through dinner so I could tackle my "To Do" list.

After dinner, hubs suggested we walk downtown near the cute little bridge and waterfalls. It really is quite a lovely place:

So I agree and we go walking, hand in hand, down the street towards the falls. As we were walking, hubs directed me across the street towards our car. It was weird, but he had all of his luggage packed up in the car for our trip, so I figured he just wanted to make sure it was locked, etc.

He opened up the trunk and took out a white, unwrapped gift box. He made some little comment of sorts and we continued on our way.

I was thinking to myself, "Ugh. I've got that laundry waiting on me, I haven't even begun to pack yet, and the flight leaves early in the morning. A walk seems nice and all, but I've got things to do!"

We hold hands and finish walking to the park and waterfalls area. Hubs leads me to a bench where we can sit down together. He places the white box on the seat next to him, out of my view.

This is where he shared the most romantic, sweet, tender, amazing words with me. I can't share it all--mostly because my memory isn't that good, but I can share the gist of it...

Out of the gift box, he removed a single red rose and handed it to me. Tied to the stem was a little silver heart charm. He made a comment about how he loves my heart.

He then removed another single red rose, this one with a silver charm with the silhouette of a woman's head attached. He then told me that he loves my mind.

The next rose had an infinity symbol charm attached to it. Hubs said it meant that he will love me for infinity--for forever.

He handed me another rose, this one with a little silver bride charm attached to it. At this point I got even MORE excited! He told me that it symbolized his love for my body.

(NOTE: We had talked several times during our courtship about the different aspects of love, specifically, heart, mind and body. So this just brought it all together in a way we both could totally understand and appreciate.)

After handing me the four red roses, he got down on one knee in front of me, opened up a little black box and asked me to spend the rest of my life with him. I WAS SO EXCITED!!!!! I jumped up, pulling him to his feet and threw my arms around him. My eyes were tearing up and I was so ecstatic that I had to ask him if I remembered to actually say "YES!" I said it a zillion times over and over again as he placed the ring on my finger.

(I don't have any great pics of the ring on my finger, but I did want to share a pic of the gorgeous hardware my hubs gave me that night. It looks like this, but with a six-prong setting on the solitaire instead of four. Also, this pic includes the wedding band.) 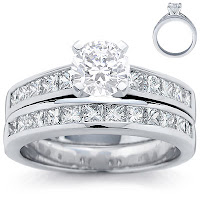 So it really was the most romantic night of my life! It was such a dream come true to become engaged to the most incredible man in the world!

It was so funny to me that after we celebrated our big moment, he said, "You've GOT to call your mom. I asked her for her permission last Thursday and she's been sitting on this since then. I had to promise her I'd have you tell her the second it happens so she can start telling people." My mom is horrible at keeping secrets, so I was quite impressed with her for staying quiet! Of course when we left the park, we stopped by her house (it was on the way!) to share our good news in person. We then stopped by my sister's place (in the same neighborhood as me) to tell her and my brother-in-law in person. They were all so excited about our engagement! The hardest part was that I'd be out of town for the next week so I wouldn't be able to tell any other family or friends in person--I had to do it over the phone!

I still had a LOT of packing to do to prepare for our week-long vacation. And now I was more nervous than ever meeting his family as his fiancee'! And on top of that, I had a wedding to plan!

I decided to make this a two-parter so I can share more info about the wedding itself and also some pictures. I'm so jealous of all of the brides-to-be whose blogs I read daily that they are in the midst of such fun planning. Oh, and the pictures I've seen! I can't wait to share some of those with you, too!