Quick Update (5/15/14 10:20 AM): They just finished rounds and looks like we're keeping all 3 chest tubes for another day. There's a chance he may lose the 2 pleural tubes tomorrow but the center one will be sticking around for a while. Exactly what we've been afraid of. They did say he can lose the oxygen and see how he does.

I didn't get around to posting a Day 6 recap yesterday following our morning rounds update, but it was a pretty great day overall!

This was Chase on Tuesday. Obviously very thrilled with his current situation. 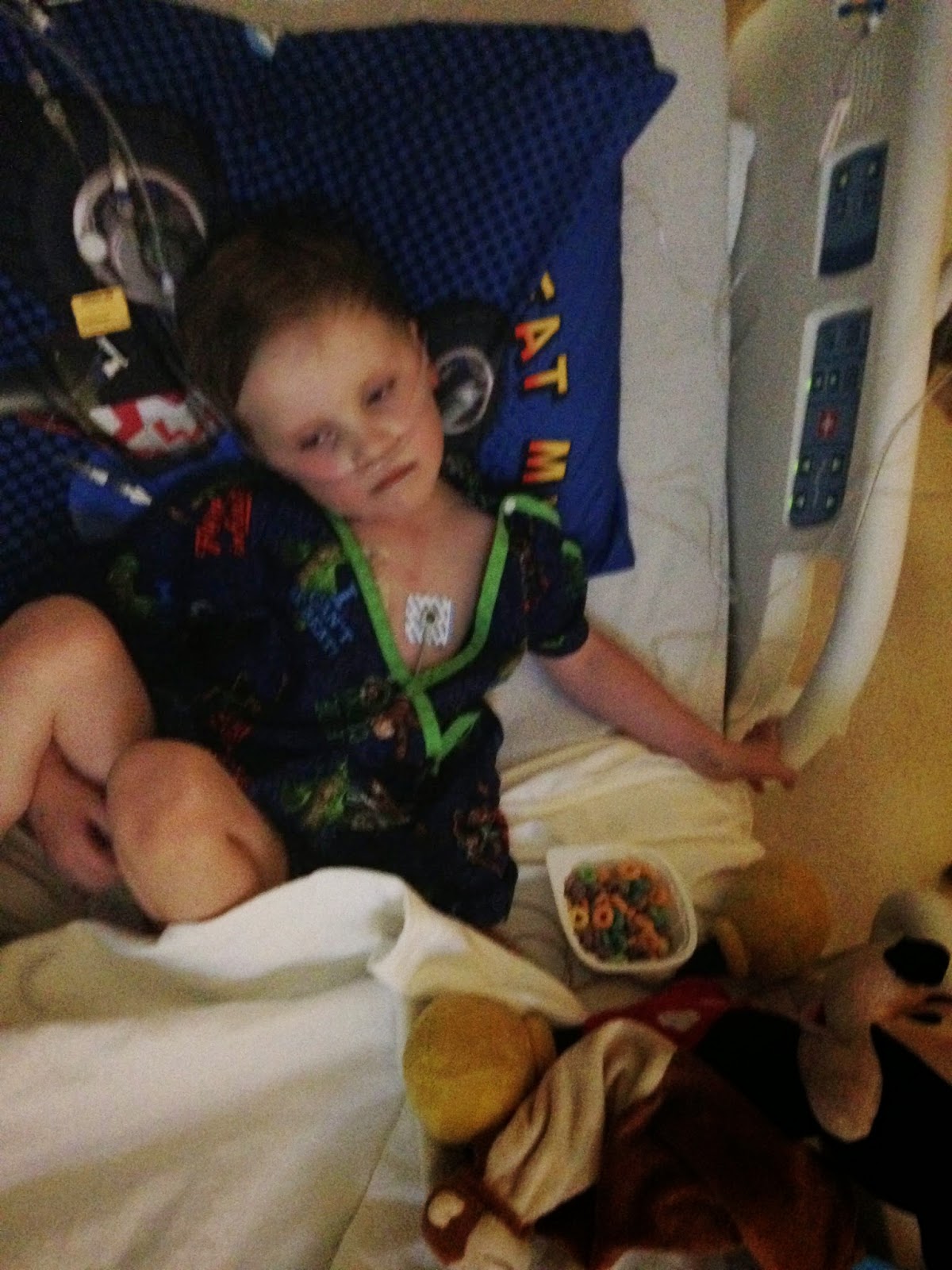 And here he is on Wednesday morning, slowly starting to perk up after getting into the treasure box of toys and goodies mommy brought for him! 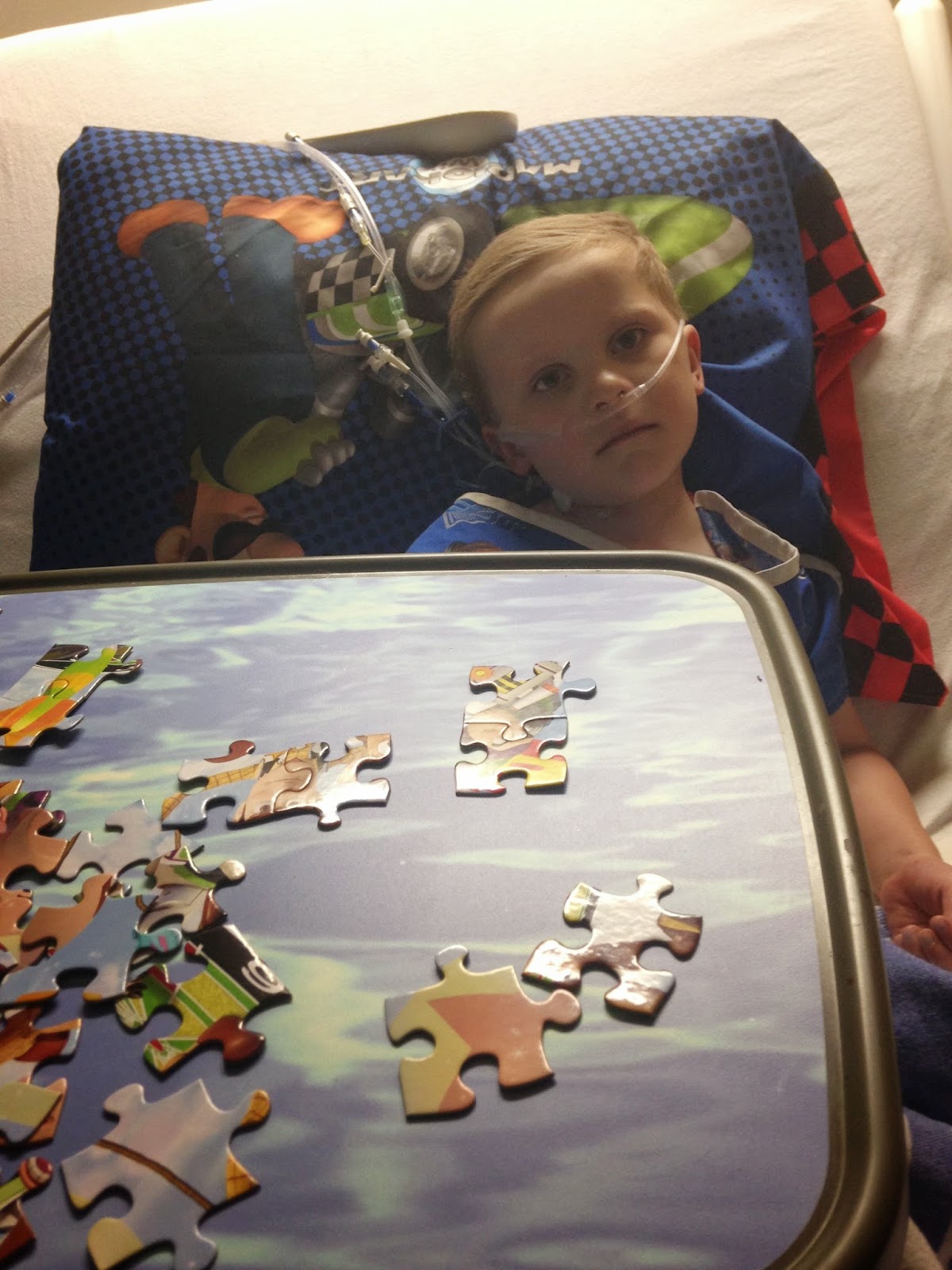 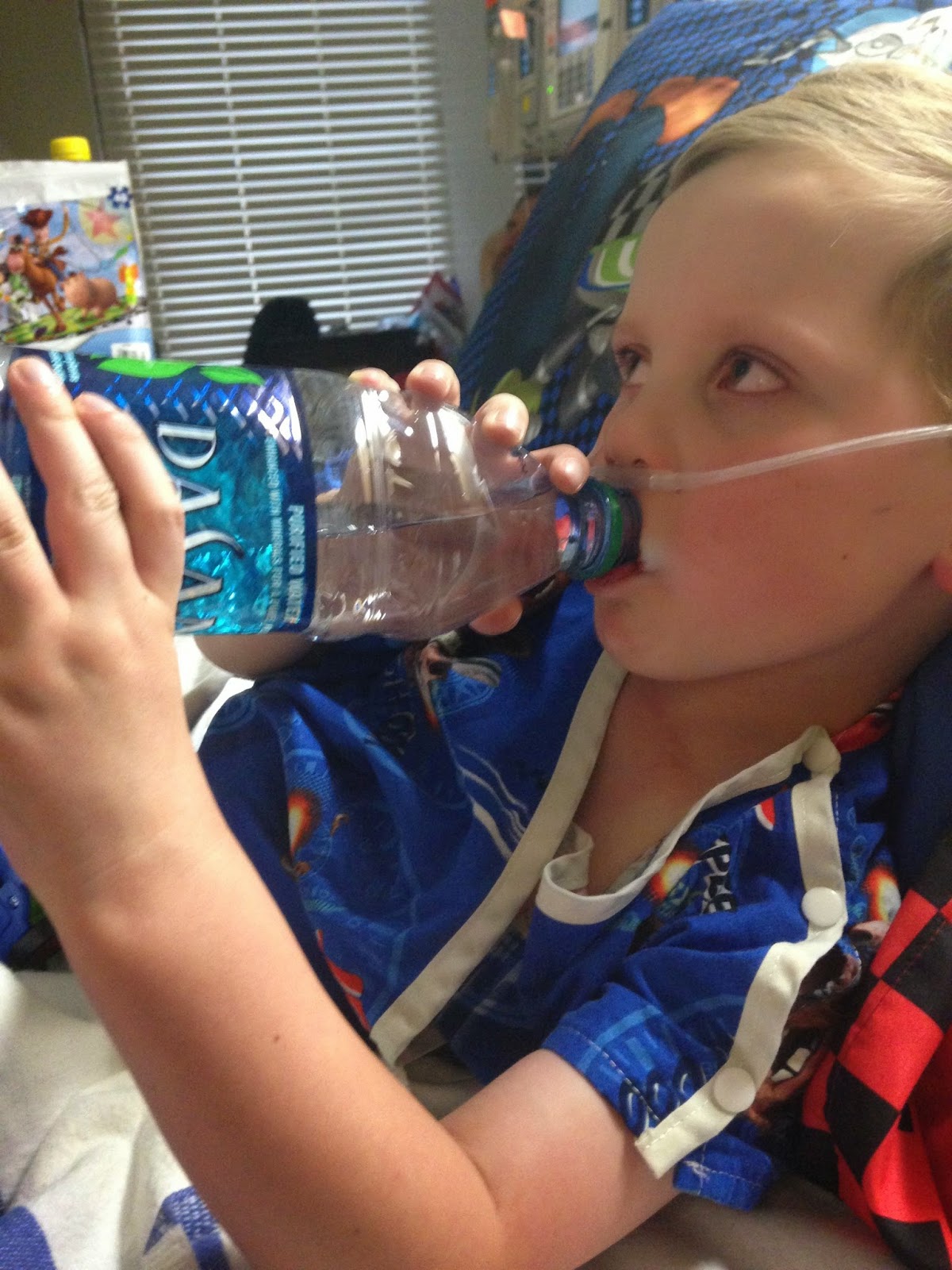 As I mentioned yesterday, the pain management regimen of Tylenol and Oxycodone was very successful in getting our boy back to feeling and acting like himself! We played in his room a good bit and even made it downstairs to the Atrium! It was definitely a ginormous effort to get him out of his bed along with his three chest tubes and two pleur-evacs and an oxygen tank. Luckily we were able to disconnect his Milrinone IV drip so we didn't have to bring the IV pole with us. But we managed to get him loaded up into a wagon and make our way to the elevator to go down one floor to the Atrium. He was quite thrilled, as you can clearly see here. 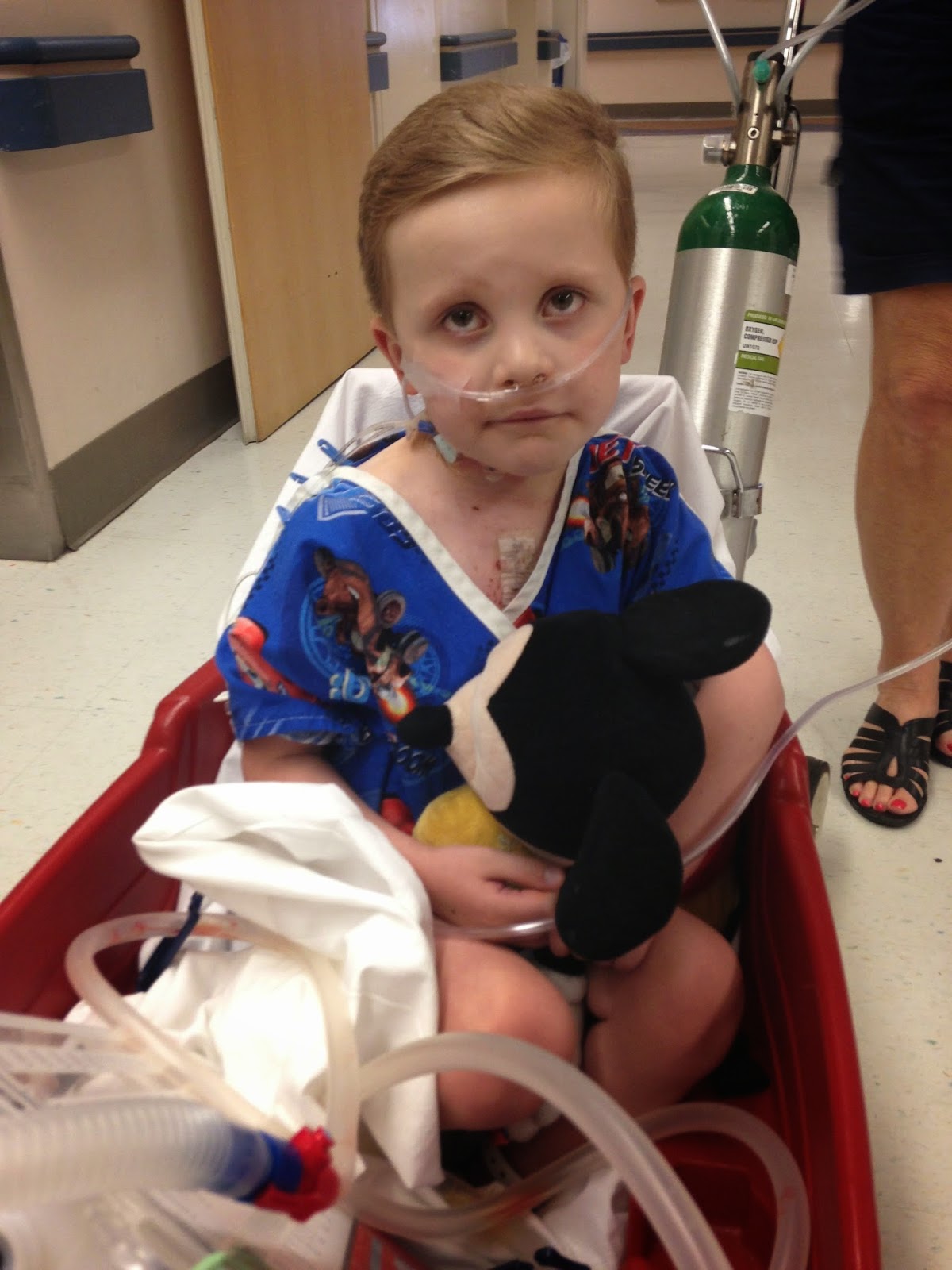 But he absolutely LOVED it! It was so great to see his eyes light up and even finally see a smile on that sweet face of his. 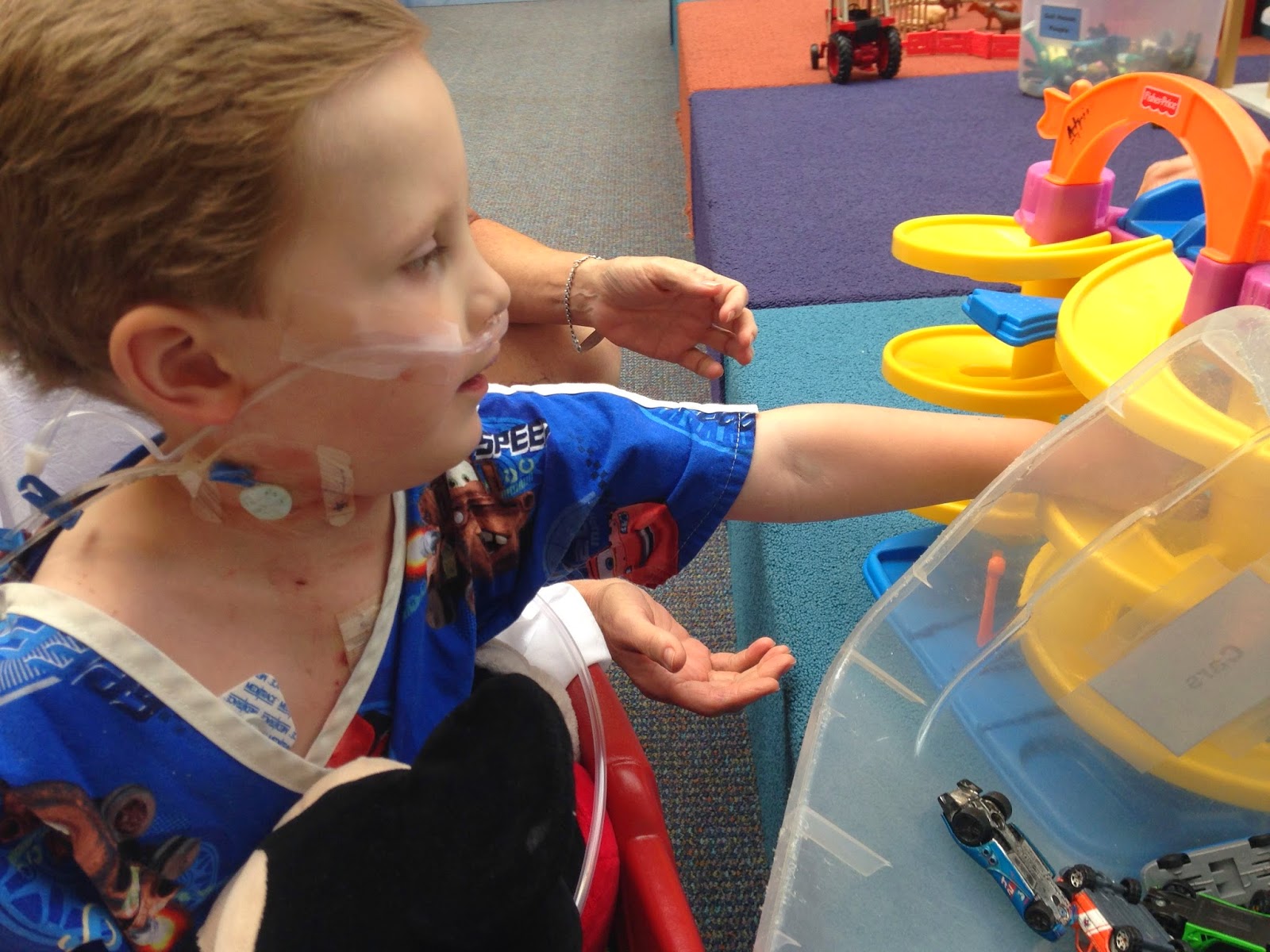 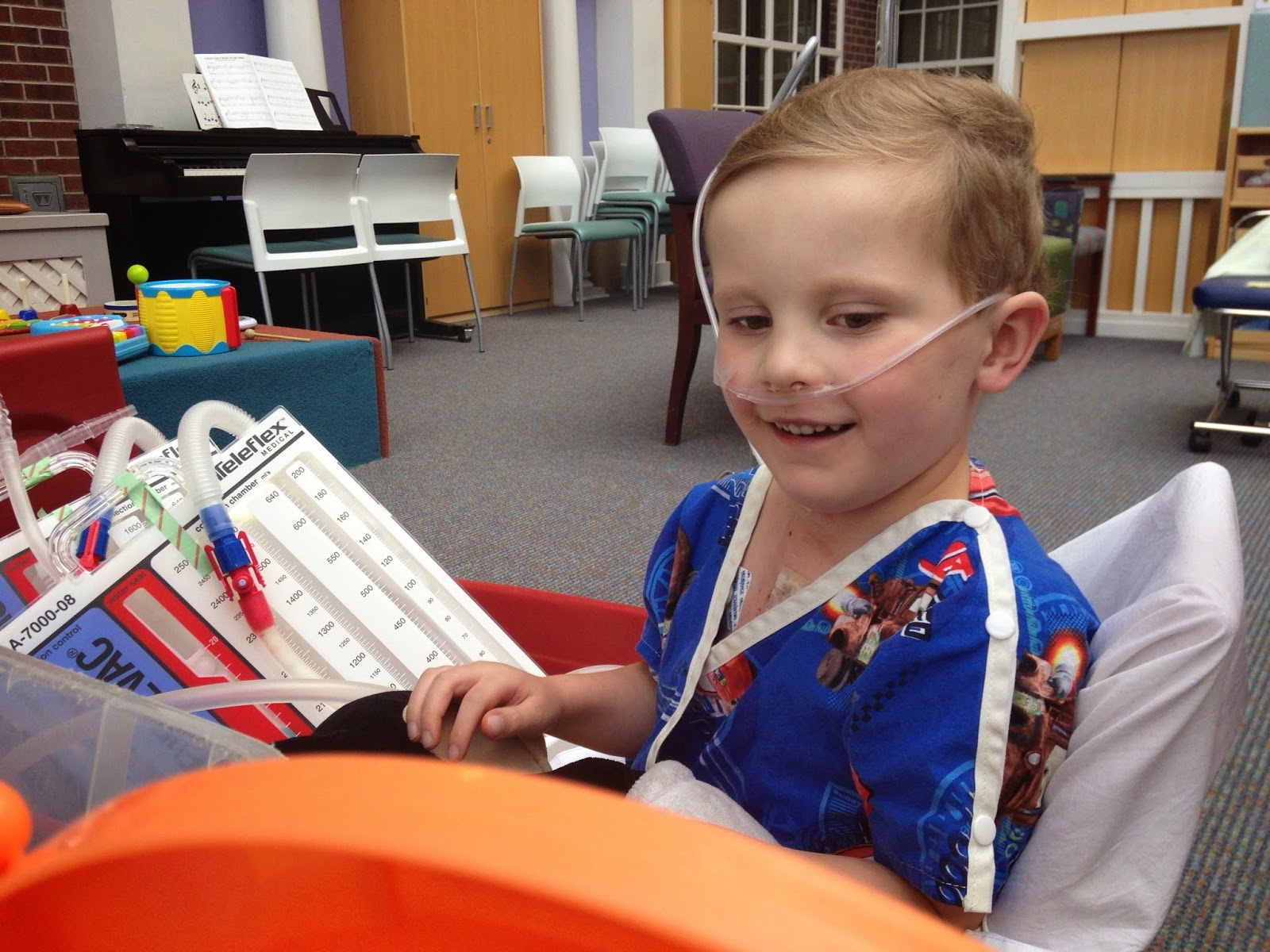 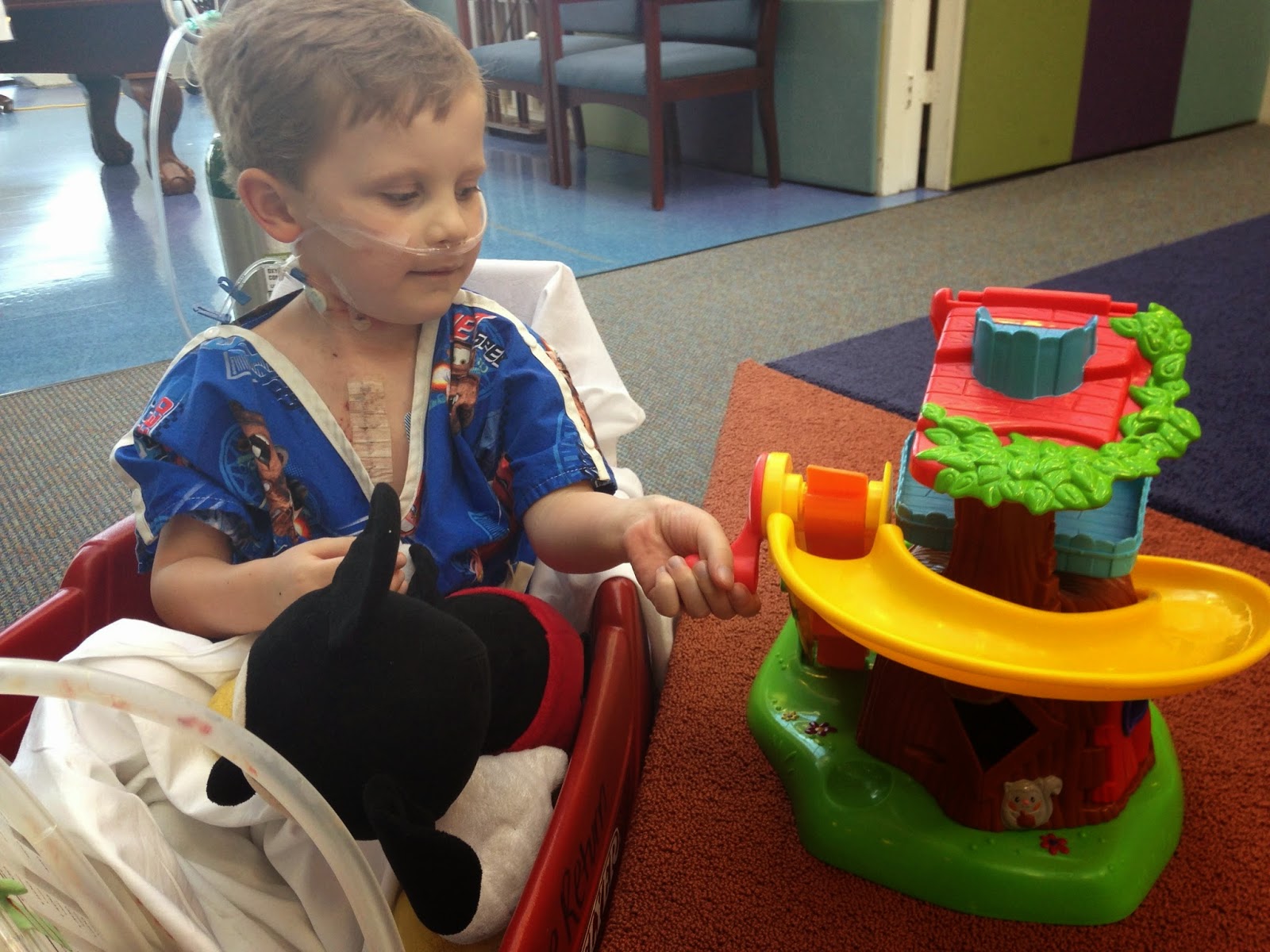 We were there for all of about 5 minutes before he announced he needed to go potty. This of course meant we needed to scurry ourselves back upstairs to his room, which we did! He went potty and was more than happy to go back downstairs again. Whew! That was so great! We went back downstairs and he played for a good 15 minutes or so. He didn't get out of his wagon, but just having him sitting up and out of his bed was a MAJOR accomplishment! Getting him moving helped get some of the fluid off his lungs, too, so we were very glad to see that!

The evening was pretty quiet and uneventful. He just relaxed in his bed and caught up on some movies and iPad games. 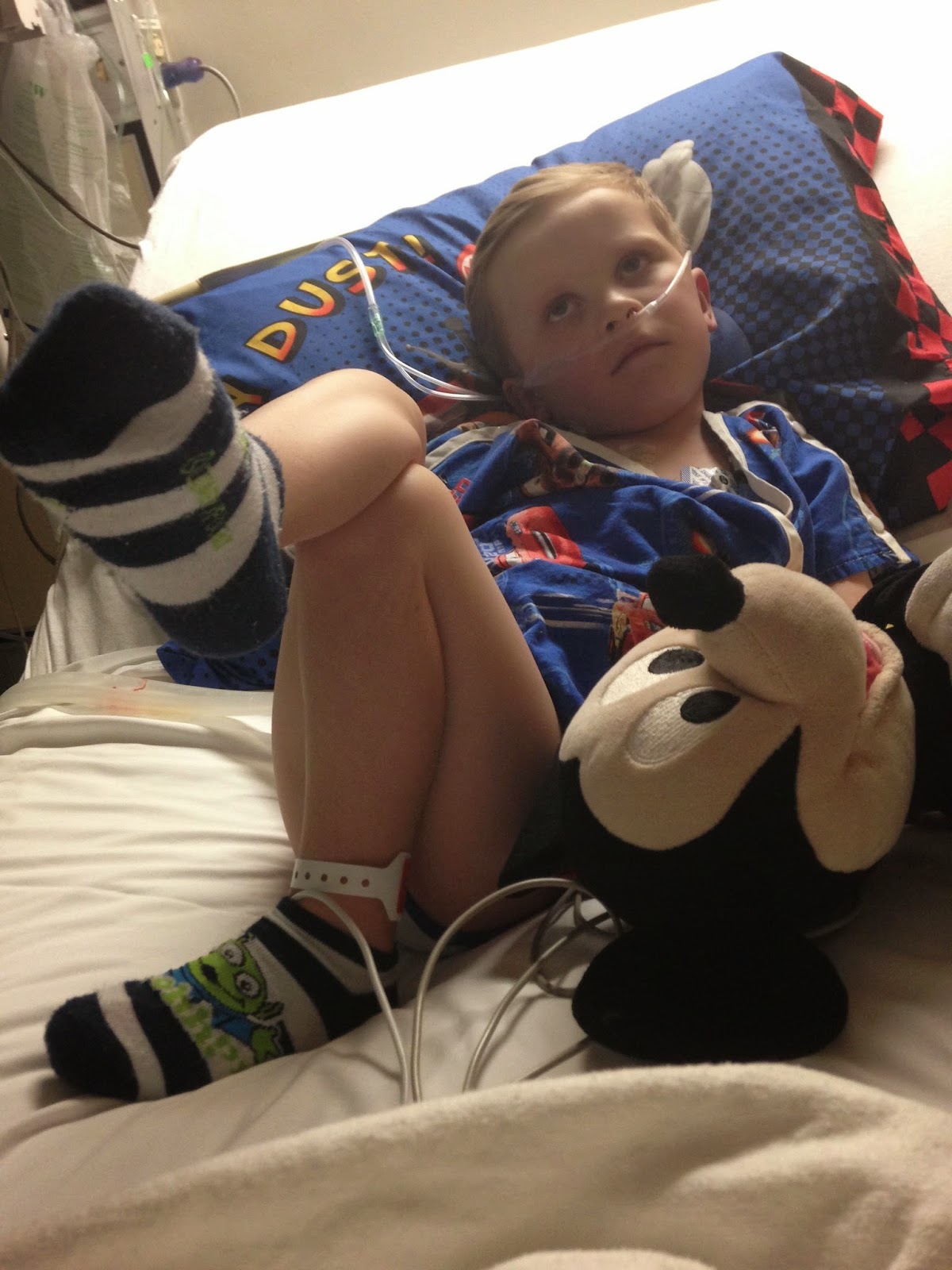 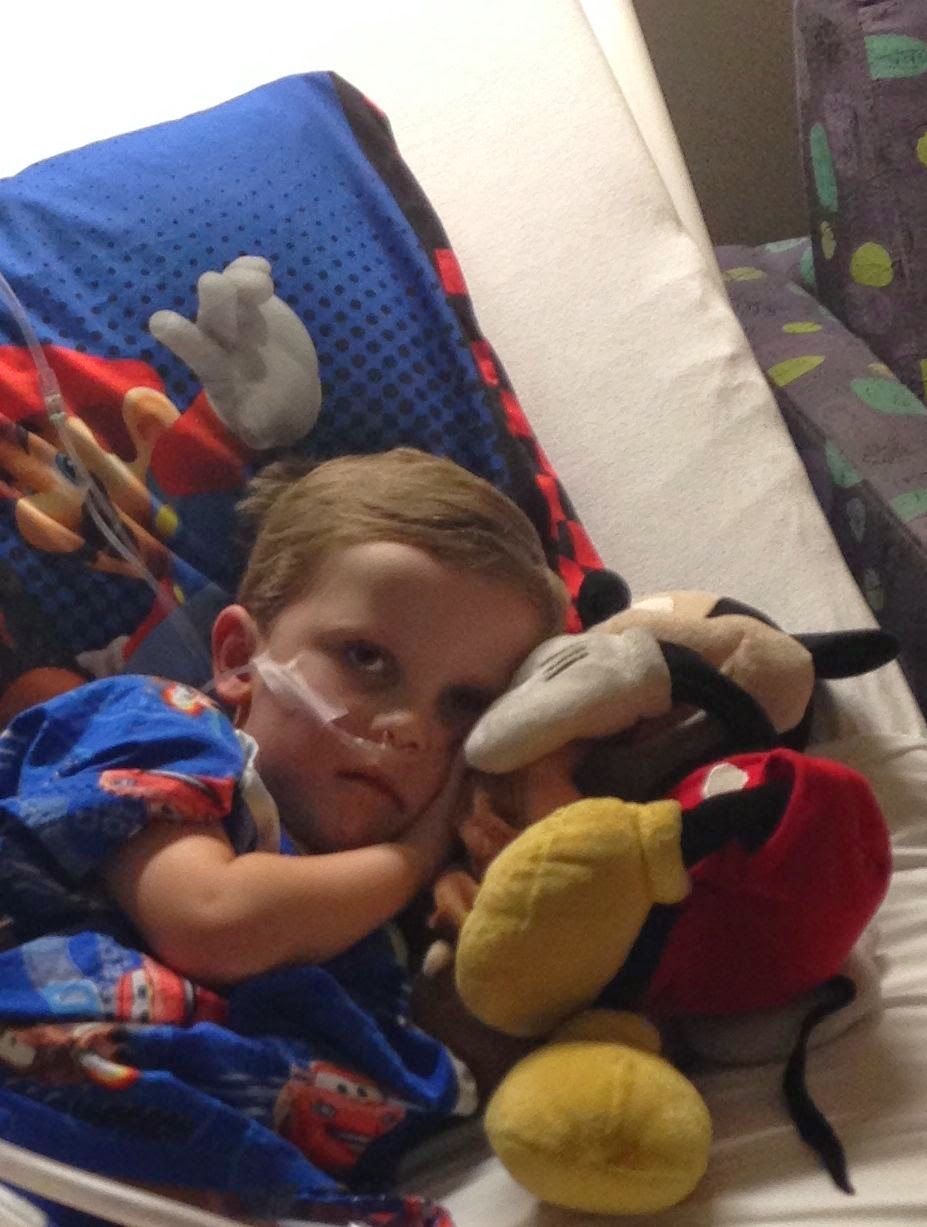 The night sounds like it went pretty well. I actually went to the rental house and slept there last night... my first night in a real bed since the night before surgery! It was heavenly! I was able to feed E before he went to bed, take a shower, cuddle and chat with LO and get a great night of sleep before returning to the hospital for day 7!

Currently we're waiting on rounds to find out what the game plan is for today. There's a tiny chance his left and right pleural chest tubes may come out today as the drainage from these tubes has been insignificant. The center tube is still draining a bit so I don't foresee that one coming out until tomorrow at the very earliest.

Our plan for today is to get Chase back downstairs to the Atrium this morning after rounds for a bit. Then I'm going to give him a "bath" and get him changed before a visit from LO this afternoon and another trip to the Atrium! Gramma and PaPa are planning to stop by as well, so it should be a fun day for Chase! Yay!

I'll update more after we hear from the doctors this morning following rounds. Maybe say a few prayers that we lose a couple of chest tubes today!!! :) 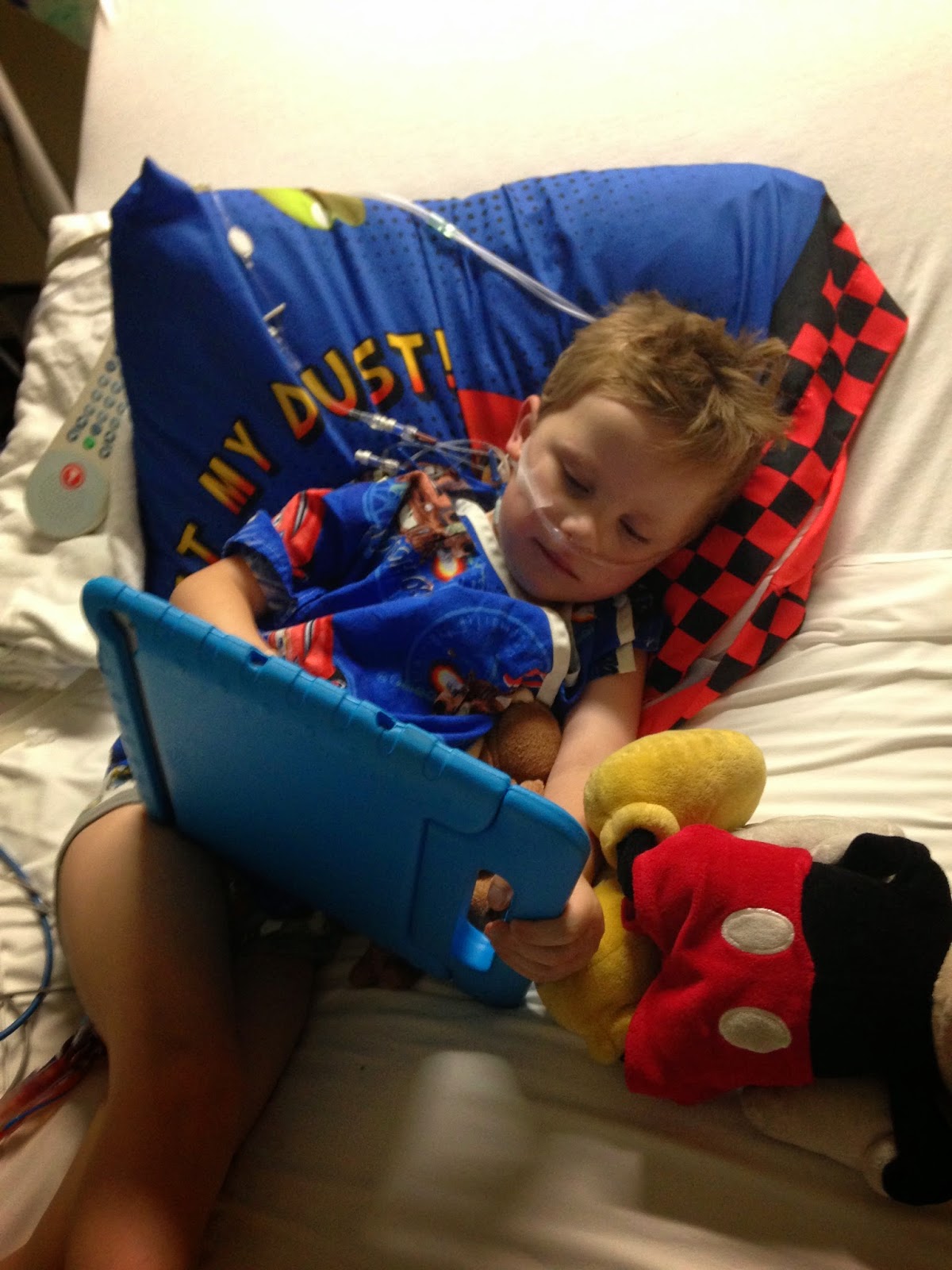 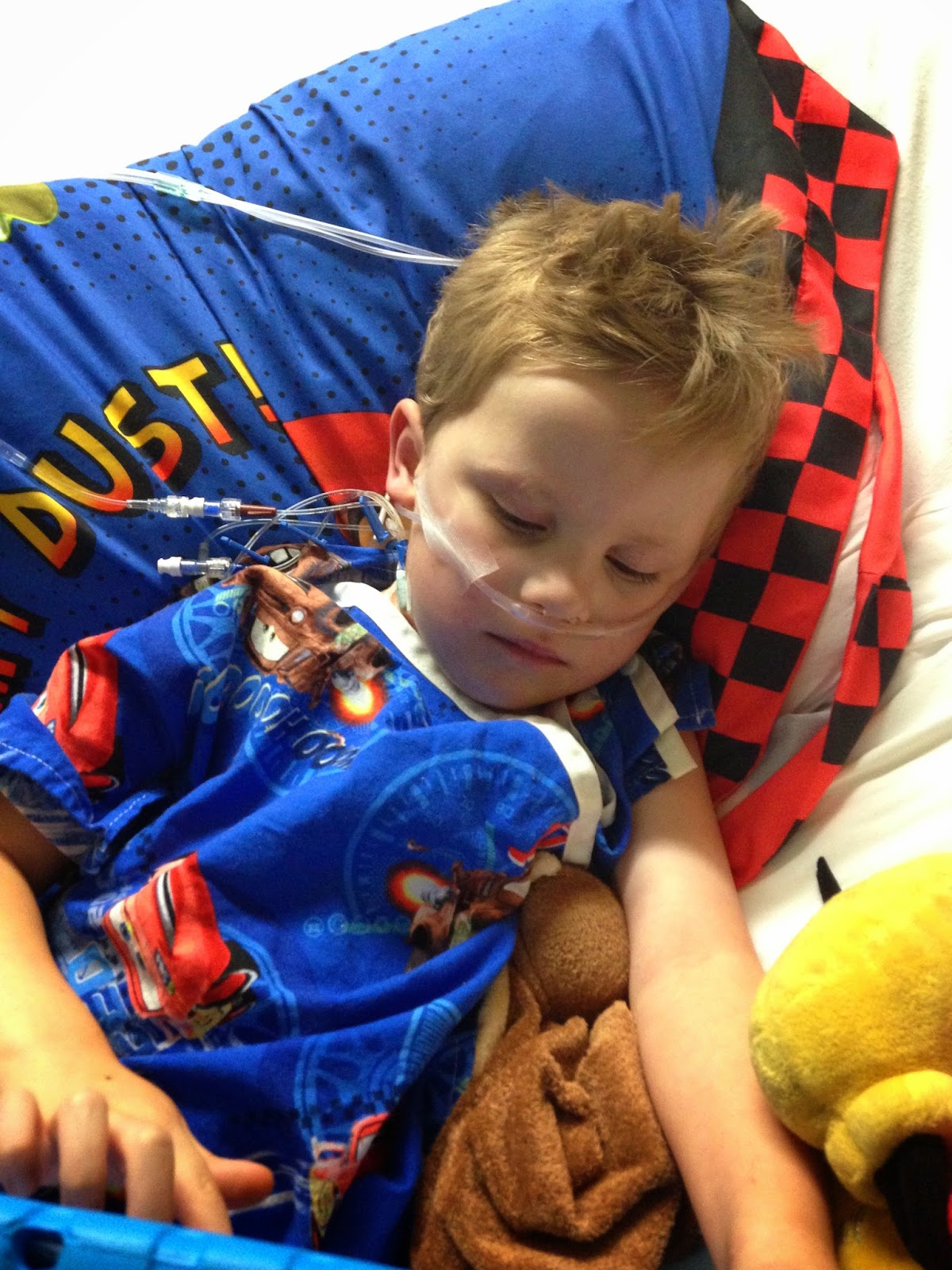